The study of the night sky has been the domain of scientists, mathematicians, opticians, physicists, chemists, cranks, quacks, and dreamers—a body of people who studied the stars and planets from every conceivable intellectual and technical vantage point. If the eighteenth century saw an acceleration in astronomers' ability to classify stars and measure their positions, the nineteenth century saw a flourishing of different disciplines being applied to astronomy. Dramatic increases in the power and sophistication of research tools allowed astronomers to examine more specific phenomena more intensely. These studies included objects near and far: the Sun, planets in our own solar system, supernovae, planetary nebulae, and the chemical nature of stars through the use of spectroscopy.

Astronomy is a technology-intensive science. Although the ancients used the naked eye and measuring devices to great advantage, and the arrival of more sophisticated tools in the late sixteenth century, such as the large and accurate mural quadrants of Tycho Brahe, provided a new precision, the arrival of the telescope at the dawn of the seventeenth century changed everything. Technology became essential, and more so with each passing century; the books published during the nineteenth century distinctly reflect this fact. Improvements in the design of refracting telescopes, which used an objective lens through which light passed directly through an eyepiece and thence to the eye, had relied heavily on improvements in glass-making technology, and advances in telescope optics and design continued throughout the nineteenth century. These developments are reflected in the work and subsequent publications of Joseph von Fraunhofer, Alvan Clark, and John Brashear. Throughout the nineteenth century new techniques and equipment emerged to make viewing the night sky and the Sun more accurate and more revealing. These advances included diffraction gratings by the American astronomer David Rittenhouse, improvements in astronomic photography by George Willis Ritchey, and other gear that refined viewers' abilities to see or record finer and more specific distinctions in light and spectra.

During the nineteenth century, solar astronomy became a distinct science as astronomers turned their efforts toward our solar system's own star—a convenient, nearby, and readily available target for research. Solar astronomers such as George Ellery Hale, Richard Carrington, and Gustav Kirchhoff wrote widely on the Sun and its properties. Hale was especially important as the first to lay out the physical basis for the solar cycle (sometimes known as the Hale cycle), the regular variations in sunspot activity, and discovering that the cycle was a magnetic one with an average duration of twenty-two years. Hale also invented the spectroheliograph, an instrument that can capture a photographic image of the Sun at a single wavelength of light, and then the spectrohelioscope, which did away with the photograph and allowed the viewer to see a single wavelength of sunlight with the naked eye.

Not all writers working on astronomical topics published strictly scientific works. Popular texts on astronomy aimed at the amateur astronomer or student appeared in increasing numbers through the nineteenth century, including Elijah Burritt's The Geography of the Heavens (1833), Thomas Dick's The Sidereal Heavens (1840) and The Practical Astronomer (1845); in Complete Works, (1859). Simon Newcomb's Popular Astronomy (1878; 4th ed., rev., 1882) and Astronomy for Everybody (1902), and the many works of Richard A. Proctor. These writers also published widely in the serial literature, and generally demystified a science that seemed fearsome to some observers because of its increasing emphasis on mathematics and physics.

Astronomy attracted a number of women scientists who made important contributions. The German-British astronomer Caroline Herschel discovered comets and, working into the first quarter of the nineteenth century, updated a catalogue of all known stars, first published by the Royal Society of London in 1798, including 560 that had never been catalogued. In America at the end of the nineteenth century and well into the twentieth, Annie Jump Cannon, working at Harvard, undertook classification work which was essential in the development of contemporary stellar classification. A number of women writers found a wide audience for works of popular science, such as Hannah Mary Bouvier's Familiar Astronomy (1855), Mary Ward's Telescope Teachings (1859), Agnes M. Clerke's A Popular History of Astronomy in the Nineteenth Century (1885), and Arabella Buckley's Through Magic Glasses (1890).

The mysterious nature of astronomy inspired some astronomers to straddle the realms of nonfiction and fiction. The French astronomer Camille Flammarion, for instance, wrote several books on extraterrestrial life, speculating on the habitability of Mars and other planets, and began edging into science fiction with his book La fin du monde(1894), about the collision of a comet with Earth. Some astronomers alternated between popular astronomy and science fiction; for instance Garrett Serviss wrote eight books on astronomy for a wide audience, as well as six science-fiction novels. Serviss was perhaps the most widely read author on astronomy in the nineteenth century in terms of sheer distribution of his books. Other astronomers, while not self-consciously writing works of science fiction, set the tone for writers of fiction, as did Percival Lowell, who mapped a network of canals from pole to pole on Mars, triggering decades of fictional treatments about life on Mars—a topic that has held people's imaginations to the current day. A number of works also treated the pseudoscience of astrology, including authors writing in the nineteenth century about astrological practice from earlier centuries.

The long nineteenth century also saw a resurgence in the publication of works from earlier eras, accompanied by editorial commentary that placed earlier works in a nineteenth-century context, as well as biographies of earlier astronomers. Isaac Newton in particular received close cultural, bibliographic, biographic, and scientific scrutiny, in the form of works by Thomas Reid, Edmund F. King, Edmund Turnor, Joseph Denison, Jean-Baptiste Biot, and dozens of others; the work of many of Newton's contemporaries was also examined.

Astronomy is location-intensive because observatories are not easily transportable, and events in the night sky appear different depending on the viewing location. The nineteenth century thus saw numerous international scientific expeditions to study specific phenomena. One reason for this increased global activity was the fact that some phenomena, such as the transit of Venus across the surface of the Sun, could be most accurately studied by observation from numerous places on the planet. A practical result of studying these transits from different locations, especially the 1874 and 1882 events, was that the triangulation of measurements from distinctive points allowed for the refinement of the astronomical unit, or AU, the precise distance from the Earth to the Sun. International expeditions examined the Sun for other properties, including early twentieth-century tests of Einstein's special and general theories of relativity. These activities were all reported in a wide variety of astronomical periodicals, pamphlets, and books.

Astrophysics—the study of the behavior and interactions of physical properties of celestial objects—has been a broad field of study, with many specific subcategories, since the late nineteenth century, although its antecedents date back centuries. Much of the groundwork for this field was laid by James Clerk Maxwell, a Scottish theoretical physicist whose work is considered by many to have wielded the greatest influence on twentieth-century physics and astrophysics. His contributions to astrophysics, and specifically his theoretical work on the electromagnetic field, are held to be on a par with those of Isaac Newton and Albert Einstein. Astrophysics, which is both observational and theoretical, studies all parts of the electromagnetic spectrum and includes a wide variety of properties of stars, galaxies, planets, background radiation, and the matter between star systems in galaxies. Nineteenth-century authors on the subject included Edwy Hand, who wrote The Essential Nature of Matter and Energy(1891), Agnes Clerke, author of Problems in Astrophysics(1903), and William Huggins, who worked extensively with spectroscopy and published prolifically on astrophysics topics. Astrophysics evoked passion among scientists in the 1890s, as demonstrated by the work of Charles Piazzi Smyth, the Astronomer Royal for Scotland, who argued for the unification of the closely connected fields of physics, spectroscopy, solar physics, and astrophysics by use of standardized terms and systematic mapping. George Ellery Hale wrote widely on astrophysics topics, especially related to solar astronomy, and in 1895 he cofounded, with James Edward Keeler, the Astrophysical Journal, now the foremost journal in the world on discoveries and theories of astronomy and astrophysics.

Many astronomical publications gained impetus from institutions able to wield not just technical and scientific prowess but also political and financial power. For instance, the Harvard College Observatory, founded in 1839, had the world's largest telescope at mid-century, started publishing its astronomy journal Annals of the Astronomical Observatory of Harvard College in 1855, and hired Edward Charles Pickering as director in 1877. Journals were also published by the Lick Observatory, which had the world's largest refracting telescope by 1888; the Yerkes Observatory in Williams Bay, Wisconsin, considered the birthplace of modern astrophysics; and the stupendous Mount Wilson Observatory complex in Southern California, founded in 1904 and later home to some of the most important discoveries in the history of astronomy, as well as the largest telescope in the world in 1917.

Finally, a wide range of runs of astronomy publications, ranging from the brief and obscure to the long-lived and prominent, reached wide audiences. Often highly heterogeneous in their choice of subjects, these magazines allowed scientific discoveries to reach audiences much more quickly than books or other monographic publications. These titles include the German journal Astronomische Mittheilungen von der Königlichen Sternwarte zu Göttingen (Publications of the Royal Astronomical Observatory in Göttingen), published between 1869 and 1919; Beobachtungs-Ergebnisse der Königlichen Sternwarte zu Berlin (Findings of the Royal Observatory of Berlin), published from 1881 to 1914; the Smithsonian's Annals of the Astrophysical Observatory (1900–1942), and many others. The popularity of these magazines convincingly demonstrates the widespread interest in astronomy fostered by the wide range of scientific discoveries in the nineteenth century. 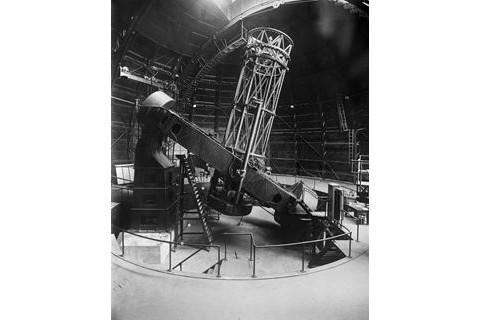 Built in 1917, the Hooker 100-inch telescope in the Mount Wilson Observatory, California, was the largest in the world until 1948.
TopFoto/The Image Works
Use this link to get back to this page.