Academy of Natural Sciences of Philadelphia: Minutes and Correspondence

Academy of Natural Sciences of Philadelphia: Minutes and Correspondence

The Minutes and Correspondence of the Academy of Natural Sciences of Philadelphia, an organization now called the Academy of Natural Sciences of Drexel University, is the only published version of these documents. The contents include minutes, correspondence, archival collection summaries, membership lists, and donation ledgers from the academy's founding in 1812 until 1924 (and 1925 in the case of the minutes). As the membership lists and donation registers indicate, the academy served as the center of a much broader scientific community than the few select names of preeminent scientists usually associated with it.

These documents will be especially relevant to those interested in the academy's establishment and the founding of the collection, library, journal, and educational branch, beginning with the “Lectures on Botany ‘for the Ladies of Philadelphia’” given by John F. Waterhouse and John Barnes. The Minutes and Correspondence includes some of the most significant figures in nineteenth-century scientific inquiry, such as William Maclure, the academy's president from 1817 until his death in 1840, who donated extensively to the group's holdings and was the primary funder of the original building, erected the year before his death. The minutes allow the scholar to follow in detail the organization's struggle to maintain its collection and its progress, including such important social changes as the election of the first female member, Lucy Say, in 1841 and the establishment of the Augustus Jessup scholarship for poor men, and later women, interested in studying natural history.

Readers can also study the prepublication development of some of the key scientific discoveries of the period in the collection's letters, which include such prominent names as John James Audubon, Charles Darwin, and Michael Faraday. The works of many lesser-known scholars enrich the collection and make it essential for any study of American scientific thought in the nineteenth century. In 1840 the minutes stopped including auxiliary information, which was kept in separate records; nonetheless, through the minutes one can learn the details of important decisions. For example, in 1890 the academy considered but ultimately decided against becoming part of the University of Pennsylvania: although they would later join Drexel University, at this earlier point they determined that the missions were too dissimilar for such a merger. Also, they debated whether to send books to the California Academy of Sciences following the California academy's loss of many materials in the 1906 earthquake and subsequent fires. From exploring such stories involving the Philadelphia academy itself to reading the correspondence of important scientists affiliated with it, the Minutes and Correspondence will be of use to a wide range of scholars concerned with natural and intellectual history. 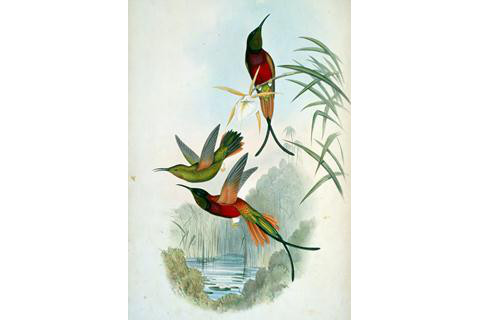 Nature study titled Crimson Topaz (Topaza Pella) by John Gould (1804-1881), part of the collection of the Academy of Natural Sciences.
© SuperStock/Alamy
Use this link to get back to this page.