In 2000 the Clay Mathematics Institute named seven problems as the most important questions to solve in the field of mathematics. These “millennium prize problems” were the Birch and Swinnerton-Dyer conjecture, Hodge conjecture, Navier-Stokes equations, P vs NP, Poincaré conjecture, Riemann hypothesis, and Yang-Mills theory. While the prize problems have roots in Enlightenment and even Greek mathematics, without the developments of the nineteenth century, we could not begin to formulate, let alone understand, today's mathematics. Mathematics changed dramatically in the nineteenth century, uncovering abstract algebras and non-Euclidean geometry, extending calculus to consider complex numbers, and opening whole new fields from economics to computer science. Astronomy, logic, optics, physics, and probability grew into the scientific fields we know today, and mathematicians defined central concepts that remain highly relevant, such as functions, dimensions, and the nature of numbers. This collection contains nearly all of the key texts in this intellectual journey.

The eighteenth century set the stage for this great leap forward in mathematics with theorists such as Leonhard Euler, Émilie du Châtelet, Maria Gaetana Agnesi, Joseph Louis Lagrange, and Nicolas de Caritat, marquis de Condorcet. Euler revolutionized math; among his many contributions were functions, factors, complex numbers, and many of today's familiar notations. Du Châtelet published an impressive number of works for an eighteenth-century woman, her Institutions du physique (1740) shaping the course of math over the next century, and would probably have published more had she not died in childbirth. Agnesi's Instituzioni analitiche (1748) and Traités élémentaires de calcul différentiel et de calcul intégral (1775) were similarly influential. The former, an early work of finite and infinitesimal analysis and a foundational calculus text, lays out the state of mathematics in her day. Lagrange brought mechanics into mathematical analysis with Mécanique analytique (1788), bridging the field of Newtonian mechanics with current mathematical theory. The Marquis de Condorcet's legacy lies most significantly with the theory of probability.

As is often the case today, many mathematicians' groundbreaking contributions appeared early in their careers with their doctoral dissertations, or Habilitationen in the case of the German theorists. Carl Friedrich Gauss's habilitation offered the first correct proof of the law of quadratic reciprocity, and he continued to be an influential and prolific mathematician. Establishing differential geometry, his Disquisitiones generales circa superficies curvas (1828) reveals the geometrical “Gaussian curvature” and his renowned theorema egregrium. Another important early nineteenth-century mathematician, Bernard Bolzano, produced the Pure Analytical Proof (1817) and Bolzano-Weierstrass theorem. Two posthumously published works, Paradoxes of the Infinite, advancing his theories of infinite sets, and Pure Theory of Numbers, building off of Agnesi's work and attempting to clarify the concept of infinitesimals in calculus, are available in The Mathematical Works of Bernard Bolzano.

The end of the nineteenth century saw rapid development in the core concepts of mathematics. While Max Planck did not propose quantum theory until 1901, James Clerk Maxwell laid the groundwork for this construct in 1873 with A Treatise on Electricity and Magnetism, offering four partial differential equations, now known as “Maxwell's equations,” which led in turn to the Yang-Mills theory, which questioned how quantum particles can have positive masses yet travel at the speed of light. Theorizing the nature of numbers, Richard Dedekind's Was sind und was sollen die Zahlen? (1888) introduced arithmetic's “Peano axioms.” Several years later, Heinrich Weber published his influential algebra text, Lehrbuch der Algebra (1895). Offering a foundation for contemporary geometry, David Hilbert's Grundlagen der Geometrie (1899) situated geometry in a formal axiomatic setting, his eighth and tenth problems appearing in the millennium prize problems: the eighth in Riemann's hypothesis, and the tenth in the Birch and Swinnerton-Dyer conjecture dealing with equations for curves.

This summary is by no means an exhaustive list of the primary theorists who drove nineteenth-century mathematics in entirely new directions. The beginning of the twentieth century proved even more vibrant, though often in the face of powerful cultural resistance. In 1902, Hertha Marks Ayrton published The Electric Arc, earning her a nomination as a Fellow of the Royal Society of London, which the Society rejected since Ayrton was married; the Society did not admit a woman for several decades. Ayrton's work covered an emerging field in physics looking at movement of various mediums such as electricity and water and built upon the Navier-Stokes equations describing fluid motion—which are still not fully understood, as the millennium prize problem attests. In addition to trying to understand the past century's mathematics, theorists in the early twentieth century tried to formalize the field. Henri Poincaré's Science et méthode (1908) solidified his reputation and legacy while guiding the future of scientific method. Meanwhile, Bertrand Russell and Alfred North Whitehead hoped to give the field of mathematics a foundation in logic, publishing the first volume of Principia Mathematica in 1910. Although the fourth volume, on geometry, never came to press, the first three volumes pulled together some of the most important developments of the previous decades, including finite and transfinite arithmetic, set theory, and, of course, logic. During the First World War, Russell was imprisoned for his antiwar activism; while jailed, he wrote Introduction to Mathematical Philosophy (1919).

The year 1921 provided dramatic impetus to a series of rapid developments in economics, statistics, game theory, and abstract algebra. John Maynard Keynes published A Treatise on Probability, arguing that probability had objective truth value, independent of human perception. The eugenicist Sir Ronald Aylmer Fisher exerted profound influence on statistics that same year with his formulation of likelihood. Also in 1921, Émile Borel, author of previous important texts on probability, algebra, functions, and physics, published a set of papers defining and outlining game theory. Over the next seven years, John von Neumann worked on formalizing Borel's ideas into modern game theory. After important contributions to calculus and physics, including Noether's theorem, Amalie Emmy Noether published Idealtheorie in Ringbereichen (1921), which became the foundational work in modern abstract algebra, introducing commutative rings and the ascending chain condition. Resistance to women mathematicians hindered the field in a number of ways. Many women mathematicians trained in Göttingen because British and American universities refused to give women degrees, and even a scholar as brilliant as Noether could not find a professorship on account of her sex. Other often overlooked women scholars include Noether's friend Anna Johnson Pell Wheeler, Sophie Germain, and Sofja Kowalewskaja.

Perhaps the most important mathematical development of the twentieth century was computer science. Behind nineteenth-century questions about equations and functions lay an interest in mechanizing or reproducing intelligent thought: math sought not only to know the boundaries of cognition but to push them, a desire that led to the development of the computer through the work of mathematicians such as Alan Mathison Turing. The Clay Mathematics Institute's “P vs NP” question asks whether there are computable functions whose answers can be quickly verified (NP) but require an impossibly long time to find (P) by a computer. We have Turing to thank for computable functions, yet tragically, the British government drove Turing to his death for being gay before he could solve this enigma of computational theory. Since 2000, only one of the millennial prize problems, the Poincaré conjecture, has been solved. To decode the remaining six problems and many other unsolved questions requires building upon the ingenious insights of nineteenth- and early twentieth-century mathematicians. 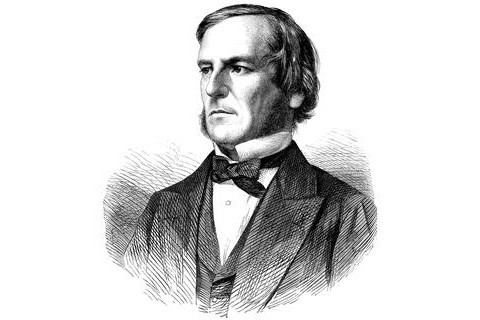 Wood engraving of George Boole (1815-1864), an English mathematician, logician, and philosopher who is considered a pioneer in the fields of differential equations and algebraic logic.
© World History / Topham / The Image Works
Use this link to get back to this page.