The term “electricity” is derived from the Greek word for amber (ēlektron), a substance that gives off sparks when rubbed. Although people were aware of electricity in antiquity, few systematic studies of electric and magnetic phenomena were undertaken until the early modern period. Notably, in 1600, William Gilbert, an English physician, wrote a popular work titled De magnete(On the Magnet), analyzing the properties and behavior of lodestones (magnetic iron) and electricity. He argued that while electricity and magnetism exhibited similar effects, their causes were fundamentally different; magnetism was natural, inherent in certain materials, whereas electricity was artificial, created by friction between two different substances.

Electrical research became more sophisticated in the eighteenth century. In 1708 Francis Hauksbee, who designed demonstrations for the Royal Society under the guidance of Sir Isaac Newton, developed a friction machine, which produced electricity when a brush swept across a wax disk, generating powerful sparks that allowed for closer study of the relationship between electricity and matter. Experiments revealed that electricity had complex material dependencies. Stephen Gray, an English dyer turned electrician, showed that electrical fluid could be transferred to an object hundreds of feet away along cords of thread. Charles François Dufay, a French natural philosopher who built significantly upon Gray's researches, further demonstrated that there were three classes of electrical materials: some substances produced and stored electricity (electrics), some transferred it (conductors), and others impeded its passage (insulators). Dufay further observed that electrics not only produced varying quantities of electricity but also different kinds, and different electrics such as glass and amber produced different amounts of electricity. Other researchers discovered new ways of storing electricity. The Leyden jar (capacitor), invented by Andreas Cunaeus and Pieter van Musschenbroek in 1746, was designed to store electrical fluid generated by friction machines, leading to research that attempted to explain its properties and effects. Benjamin Franklin's electrical experiments and theories, collated and published as a series of letters in a book titled Experiments and Observations on Electricity, Made at Philadelphia in America in 1751, promoted further studies of electricity. In particular, Franklin argued that electrical effects were caused by an imbalance of electrical fluid; it flowed from areas of high electrical density to low, a plus or positive state to a minus or negative state.

Scientists also began to study other ways of generating electricity. In 1773 John Walsh, an English physician and friend of Franklin, building on earlier research by Edward Bancroft, showed that the torpedo ray produced electricity via a specialized organ composed of alternating layers of tissue in close-packed columns. Other researchers found combinations of materials that generated electricity without friction. In 1775 the Italian natural philosopher Alessandro Volta built the electrophorus, an electrical condenser (capacitor) made by layering metal and wax that seemed to store electrical fluid like the Leyden jar. In 1788 William Nicholson, a self-taught British electrician, editor, and publisher of scientific works, constructed the “revolving doubler,” a device that rotated metal plates in parallel planes, producing electricity without contact.

In 1791 Luigi Galvani published De viribus electricitatis in motu musculari commentarius (Commentary on the Effects of Electricity on Muscular Motion), a detailed analysis of the physiological effects of electricity on animals. Galvani argued that his experiments with frogs demonstrated a kind of animal electricity unique to living organisms. Volta argued that Galvani's apparatus and methods were more important than his theoretical conclusions, asserting that contact between the metal implements Galvani used in his experiments encouraged the flow of electrical fluid while the presence of animal tissues augmented it. In 1800 Volta's letter announcing the invention of the voltaic pile (battery) appeared in the Philosophical Transactions of the Royal Society. The pile, which Volta christened the “artificial electrical organ” because of its similarity to the torpedo ray's anatomy, generated a continuous electrical discharge from the layering and interaction of different materials in a column, such as silver, zinc, and saltwater.

Electrical research flourished around the turn of the nineteenth century. Studies appeared in both scholarly and popular books, such as Charles Augustin Coulomb's Mémoire sur l'électricité et le magnétisme (Memoir on Electricity and Magnetism), in which he demonstrated that the force between two charged bodies varied with the inverse square of the distance between them, and Joseph Priestley's History and Present State of Electricity, which summarized the evolution of the field. Electrical articles appeared both in established journals, such as the Philosophical Transactions, and in relatively new periodicals, such as the monthly Journal of Natural Philosophy, Chemistry, and the Arts. Financed and edited from 1797 to 1813 by Nicholson and later purchased by Alexander Tilloch of the Philosophical Magazine, this periodical carried some of the earliest studies of the voltaic pile and its associated physical and chemical phenomena. Nicholson, along with his colleague Anthony Carlisle, showed that attaching wires to each end of the pile and immersing them in water caused water to decompose into its constituents, hydrogen and oxygen. The Annales de chimie (1789–1815; Annals of Chemistry), renamed the Annales de chimie et de physique (1816–1913; Annals of Chemistry and Physics), also published important articles pertaining to electricity. Toward the middle of the nineteenth century, more specialized periodicals began to emerge, such as The Electrician (1861–1864), reflecting an increased interest not only in electricity but also in electrical technology and applications of electrical research.

This heightened interest in electricity was spurred in part by Hans Christian Ørsted's Experiments on the Effect of a Current of Electricity on the Magnetic Needle published in 1820, which established a hitherto unknown relationship between electricity and magnetism. Researchers, such as Michael Faraday in England, Joseph Henry in the United States, and André-Marie Ampère in France, devised ingenious experiments and explanations of electromagnetic phenomena. Ampère, in Mémoire sur la théorie mathématique des phénomènes électrodynamiques (1827; Memoir on the Mathematical Theory of Electrodynamic Phenomena), and Henry, in On the Influence of a Spiral Conductor (1837), studied the effects of current traveling through straight conductors and curved wires, and how current affected neighboring charged bodies and magnets. Faraday, in Experimental Researches in Electricity (3 vols., 1839–1855), detailed his study of electromagnetic phenomena, including the properties and behavior of current on chemical composition, electromagnetic induction, and the electric motor. In collaboration with William Whewell, an influential philosopher of science during this period, Faraday developed new terminology with which to describe electrolysis. He also introduced the concept of an electromagnetic field to help explain the relationship between electricity and magnetism.

Works published between the middle and end of the nineteenth century became increasingly technical as researchers began to experiment with mathematical tools to account for electrical behavior. The Scottish physicist James Clerk Maxwell built significantly on the work of Faraday and William Thomson, Lord Kelvin. Maxwell's 1865 essay in the Philosophical Transactions, “A Dynamical Theory of the Electromagnetic Field,” postulated that light was an electromagnetic wave. He also developed equations describing the relationship between electric and magnetic fields. In 1873 he published a more complete account of his research in A Treatise on Electricity and Magnetism. After his death in 1879, scientists like Oliver Heaviside and George Fitzgerald worked to distill and promote Maxwell's theory.

In addition to theoretical breakthroughs in describing electromagnetic action, there were significant experimental and technological discoveries that brought about changes in communication systems, urban lighting, and transportation, sparking a transitional period sometimes referred to as the Second Industrial Revolution. In 1844 Samuel Morse successfully sent a message along a newly finished telegraph line stretching between Baltimore and Washington, D.C. In 1858 the first transatlantic message was sent. In 1880 Thomas Edison received a patent for a carbon-filament lightbulb. In a series of articles (1887–1888) published in the Annalen der Physik und Chemie (Annals of Physics and Chemistry), Heinrich Hertz showed that electromagnetic waves traveled at the speed of light. And in 1897 J.J. Thomson of the Cavendish Laboratory at the University of Cambridge discovered the electron.

At the turn of the twentieth century Guglielmo Marconi and others began experimenting with wireless telegraphy. Marconi's lectures at England's Royal Institution appeared in the Proceedings of the Royal Institution of Great Britain. Specialized magazines, such as American Electrician (1896–1905), Electrical World and Engineer (1899–1905),and later Electrical World, published from 1906 until recently, reflected a new interest in electrical engineering not only as a profession, but also as a field of study that stretched beyond the traditional university setting into industry.

Over the long nineteenth century, which began with the voltaic pile and discussions of how electricity could be generated without friction and ended with theoretical discussions of electric power and utility, electrical research evolved to include magnetic effects and the recognition that electric and magnetic phenomena were inextricably linked. Scientists realized that chemical processes could produce electricity and electromagnetic waves, including light, and could travel virtually instantaneously over vast distances. The eighteenth-century term “electrician,” referring to someone who studied electrical phenomena, came to mean a technician, someone with specialized knowledge of electric circuits. Electrical research expanded beyond traditional scholarship, as inventors, businessmen, and the general public became fascinated by electricity and its applications. These changes in the study of electricity and magnetism profoundly affected developments in the twentieth century and beyond. 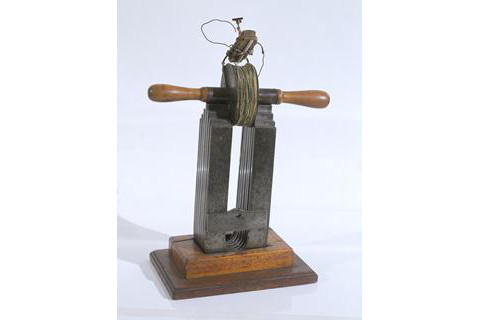 An early inductor used by Michael Faraday (1791-1867) to discover the law of induction.
The Royal Institution, London, UK/The Bridgeman Art Library
Use this link to get back to this page.