The answer to the seemingly simple question “What is color?” has shifted dramatically over time. Aristotle's conception of color as the border between light and dark or pure white and black endured until the scientific curiosity of the European Enlightenment questioned the constitution of color and whether a finite or infinite number of colors existed, even asking if colors could be said to exist. The “Golden Age” of color theory (1850–1931) shaped the subsequent art and industry of color, as scholars and industrialists alike began to explore color in new ways, charting color and isolating primaries from which all other colors could theoretically be mixed, using color blindness to understand color sight, and perhaps most importantly, delving into the role human perception plays in identifying and naming the color spectrum.

In the seventeenth and early eighteenth centuries, René Descartes and British Empiricist thinkers revolutionized the way the West viewed color. Challenging the dominant belief that objects possessed the quality of color, Descartes and John Locke posited that colors did not exist physically, other than as dispositions toward experience. Then David Hume recognized that sound, color, and heat were qualities of perception rather than of physics. Perhaps the most celebrated revolution in color theory was Isaac Newton's experimentation in optics. While others had observed the effect of light passing through a prism, Newton's experiments with multiple prisms, published in his landmark Opticks (1665), allowed him to observe the refractions and isolate monochromatic light, from which he mixed light to produce other colors. From the monochromatic light, Newton created the color circle, which resembles today's color wheel. On the circle, Newton identified seven principal colors, or primaries, which raised the question of whether there are finite colors. Aristotle had offered four core colors corresponding to the basic elements of air, earth, fire, and water. Newton's concept of primary colors is fundamentally different from Aristotle's because Newton hypothesized not qualities of the elements but rather a theoretical set of specific light waves from which all colors could be produced.

Color theory in eighteenth-century Europe was characterized by attempts to map color through circles, graphs, wheels, pyramids, and spirals. Some of this work served industrial purposes and some was theoretical, but none of these models stood up to subsequent scientific developments because Newton and the eighteenth-century theorists were limited by their failure to grasp the physiological parameters of color perception. In 1756 the poet, scientist, and glass specialist Mikhail Lomonosov attempted to move beyond the Newtonian limitations by proposing that three sensors of diverse sizes were responsible for our perception of color, offering a clever analogy for understanding what would later be called cones: the eye is like a room packed with cannonballs; in the space between the cannonballs are bullets, and between the bullets, small shot is packed. Another glass merchant, George Palmer, introduced the psychological and physical elements of color in 1777, when he theorized three “fibres” in the eye responsible for seeing color. His work informed color research in a number of directions, from explaining color blindness and afterimage to proposing an “artificial daylight” which led to innovations in electrical lighting. Yet the idea that the eye's physiology is responsible for color vision did not gain academic attention until Thomas Young presented such a model to the Royal Society in London. Young developed a trichromatic theory of vision based on sensors in the retina, each receiving a certain range of wavelengths, and published On the Theory of Light and Colours (1802). Young posited that three colors could be mixed to produce the entire spectrum of colors visible to humans. Later science associated these three colors respectively with the short- , middle- , and long-wave cones in the normal human retina, the three sizes of Lomonosov's analogy. Young further challenged the physical model of color with his “problem of interference.” Two people standing side by side looking at a soap bubble each perceive colors swirling on the surface, but not exactly the same colors. Color therefore is not inherent, as different perspectives yield different perceptions.

If human color perception occurs when receptors (cones) capture certain wavelengths of light, then could there be wavelengths that the receptors in our eyes do not capture? In A Dissertation Upon the Philosophy of Light, Heat, and Fire (1794), James Hutton first proposed nonvisible rays beyond the spectrum of human perception. Previously, the anthropocentric worldview had made it incomprehensible why God would put something on earth that was imperceptible to humans. Hutton's work not only challenged the vision of a universe created by God for humans, it also opened the field for remarkable scientific research into color as perception leading into the “Golden Age” of color theory. William Herschel was the first to empirically test wavelengths beyond the spectrum visible to humans, though he incorrectly categorized invisible wavelengths as a separate category. Researchers approached color from many disciplines, and sometimes their interests stemmed from personal concerns. The British chemist and mathematician John Dalton, who was color blind, pioneered dichromacy (having only two types of color receptors). While he was correct that such conditions are linked to gender, he was a bit misguided to attribute dichromacy to humors rather than the receptors in the retina.

Like Lomonosov's paper, Young's talk to the Royal Society, and Herschel's experiments, many of the great leaps of optical science in this era took the form of public presentations or demonstrations rather than publications. Gaspard Monge, for example, was renowned for lectures on a number of topics in color theory, including the relativity of color perception, the paradox of material and light, and colored shadows, which he explained as resulting not from physical truths about color but from our physiological mental interpretation of stimuli. Also, like Lomonosov and Palmer, contributions to color theory came from artisans and artists as well as scientists. The painter Philipp Otto Runge designed spherical color models based on hue and luminosity, two elements of color that also interested Johann Wolfgang von Goethe. The latter conceived of a number system for luminosity ranging from white to black. Taking trichromacy from physiology to experience, Goethe crafted his theory of color around the primaries red, yellow, and blue. Goethe's Theory of Colors (Zur Farbenlehre, 1810) disregards science, and especially Newton, returning instead to art and Aristotelian philosophy to explain color. Although he intended his treatise as a repudiation of optical science, its legacy lies with its aesthetic and literary merit. Nearly a century would pass before Albert Henry Munsell published his Color Atlas in 1905, incorporating a gray scale following Goethe and a 3-D model following Runge, but one based on pigment rather than light since not all hues have the same base lightness. To convince artists, specifically painters like himself, not to scorn theory as inartistic, J. Bacon wrote The Theory of Colouring: Being an Analysis of the Principles of Contrast and Harmony (1866). Few scientists, however, encouraged their peers to embrace the artistic color theory.

Inspired by Hermann Helmholtz's Handbuch der physiologischen Optik (1867), which distinguished between subtractive pigment mixture and additive colored light mixture, Hermann Grassmann identified a third element of color: saturation. Hue (also called shade or tint) refers to the quality of color determined by its wavelength, such as red or violet. Luminosity (also brightness, lightness, or value) describes, as Goethe's number line suggests, the colors' proximity to white or black. Saturation describes the intensity of hue: at zero saturation, a color would be achromatic, having no hue. Grassmann correlated hue, brightness, and saturation respectively to three attributes of sensation: wavelength, purity (whiteness), and intensity, using these parallels to draw multiple complementaries. Indeed, he imagined the possibility that every hue has a complement, if not within the visible spectrum.

Although the only complementary pair Helmholtz identified was yellow and blue, the concept along with his theory of compound color led Sir James Clerk Maxwell to publish On the Theory of Compound Colours, and the Relations of the Colours of the Spectrum (1860) in response. Maxwell studied the electromagnetic theory of light from which he developed a triangle chart of colors based off of primaries red, blue, and green, extending Young's theory of light and color and relating light wavelength to excitation of receptors. Dana Estes and Heinrich Schellen compiled recent research on “sound, heat, light, and color” to write Spectrum Analysis Explained (1872), detailing spectrometry's great promise for science and, more importantly, emphasizing color's roots in human perception.

As the field of color theory grew, psychology joined physiology as a possible influence on human color perception. The chemist Michel Eugène Chevreul was at the forefront of psychological color research with The Principles of Harmony and Contrast of Colours (1854; 3rd ed., 1860). Then Grant Allen founded visual ecology, claiming color perception (focused on nonhuman animals) evolved with plant coloring, thereby bridging psychological and physiological explanations. In Color and Color Theories (1929), the mathematician and psychologist Christine Ladd-Franklin developed the evolutionary explanation for color perception, the progression of which matches modern accounts of human evolution of color vision.

The twentieth century brought color theory not only into fields such as psychology and evolutionary biology but to the understanding of an average worker or reader. In The Colorist (1908), J. Arthur H. Hatt presented a color system integrating recent chemical and industrial research on color in such a way that a general audience could better comprehend the science, or professionals working with color could use the system to improve their work. Color dictionaries allowed audiences with very divergent interests to have a common textual and visual vocabulary. These included specialty works such as the multivolume Répertoire de couleurs pour aider à la détermination des couleurs des fleurs, des feuillages et des fruits (1905), by the Société Française de Chrysanthémistes, and Robert Ridgway's privately published Color Standards and Color Nomenclature (1912). Bonnie E. Snow and Hugo B. Froehlich published The Theory and Practice of Color (1918; 2nd ed., 1920) to help instill an understanding and enjoyment of color in “the average man [who] is densely ignorant” of how to live with color. Returning color theory to art, Carl Gordon Cutler and Stephen C. Pepper devised a color scale intended to mimic natural light, focusing on artistic application with Modern Color (1923).

Developments in other fields transformed color theory, which had previously been dominated by chemistry, physics, and medicine. The psychologist and philosopher Mary Whiton Calkins associated color theory and dreams, and later Dorothea Jameson brought cognitive psychology to bear on current color theory. Twentieth-century technology answered many questions about the nature of color, but many remain mysterious. Empirically, we know that neither the ocean nor the sky is blue. So what do we actually mean when we call grass green or the sun yellow? And does matter or light actually possess the colors we perceive? Or is color solely a function of our perception, an element of our acquisition of knowledge? Asking whether color exists independently of perception or the human mind is both a metaphysical question about the nature of color and an epistemological question about human knowledge. 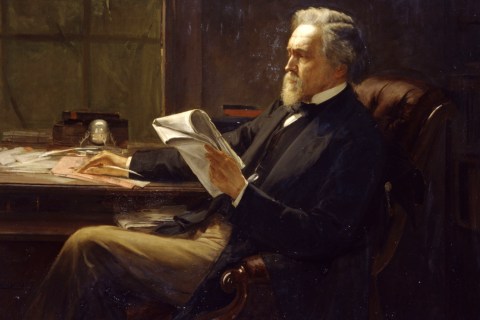 Nineteenth-century portrait of British secularist George Jacob Holyoake (1817-1906). Holyoake was convicted of blasphemy in 1842 and sentenced to six months in prison.
Birmingham Museums and Art Gallery / The Bridgeman Art Library
Use this link to get back to this page.