Sandra Steingraber, Ph.D., is the Rachel Carson of our time, albeit a much more public version. She is a biologist who crusades against chemicals, an author; who writes eloquently about their consequences and a poet who interweaves environment and human life in new forms. Her latest book is Raising Elijah: Protecting Our Children in an Age of Environmental Crisis (Da Capo Press), about confronting the onslaught of chemicals in our everyday lives. Her latest cause is fracking--or hydraulic fracturing for natural gas--and efforts to stop the practice in her home state of New York, where she is a distinguished scholar in residence in the Environmental Studies and Science department at Ithica College. Below, she talks to E about her latest concerns.

1. E Magazine: You've been following the problem of toxins in our environment and the health consequences for some time--do you think there has been enough public outcry and action?

Sandra Steingraber: There is a disconnect between the public outcry and the political action. So far, the chemical industry and the oil, gas and coal industries have impeded all attempts at meaningful chemical reform and transformational investments in renewable energy. We have the science showing harm. We have people who are leading the charge for change. We have elegant and practical solutions in the form of green chemistry, green engineering and green energy--but they are all held hostage by the fossil fuel industry and the chemical industry, which is its subsidiary. This represents a failure of government to provide for the wellbeing and security of its citizens.

2. E: Tell me your thoughts about the importance of where we live and how that impacts our health.

S.S.: I think of the determinants of health as a triangle: There are the genes that we've inherited; there are the habits and lifestyles we maintain within our cultural and social communities; and then there are the environmental exposures that none of us consent to. Genes turn out to be a much smaller contributor to health than we've previously appreciated. I'm interested in shining a light on environmental exposures because that's something we can control, collectively. People put chemicals into the environment; people can take them out. I feel like my own life story illustrates the importance of the environmental determinants of health. I was diagnosed with bladder cancer at age 20. My mom and I were co-cancer patients together--she had metastatic breast cancer by age 46. My aunt went on to die of the same kind of cancer I had. But I'm adopted. I'm related by my family by environment, not by genes.

3. E: You were one of the people who signed a letter to Governor Cuomo asking him to maintain a moratorium on fracking in New York. What are your fears about fracking? And do you think it can be avoided?

S.S.: My fears are grounded in evidence: Human harm follows fracking wherever it goes. Fracking is a carcinogen-dependent, accident-prone method of blasting methane out of our bedrock by shattering it. During hydrofracking, millions of gallons of water laced with chemicals are pumped into the ground. These chemicals include known carcinogens and endocrine disruptors associated with cancer. Most alarmingly, case studies and [evidence] from other states provide credible evidence of public health risks in communities located near drilling and fracking operations. Of course, fracking is avoidable. The nation states of France and Bulgaria have already avoided it--by banning it.

4. E: Explain the idea that the environmental crisis is really a parenting crisis. 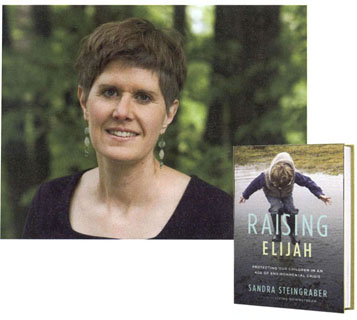 S.S.: Our job as parents is to protect our children from harm and to plan for their future. We can't do either one if toxic chemicals are found in air, food and water and if climate change sends pollinators and oxygen-making plankton off the cliff. So, as parents, we have to confront the fossil fuel industry and insert ourselves into the political process--in the same way we would if our children were threatened by drug dealers, drunk drivers or pedophiles.

5. E: So many toxic exposures are out of parental control. What do you recommend in terms of how parents can begin to regain control over their immediate and surrounding environments?

6. E: What is needed at the federal level to ensure better health and environmental safety from toxic exposures?

S.S.: An energy policy not dependent on fossil fuels. There is no other way.

BRITA BELLI is editor of E.