Students are naturally inquisitive and driven by an impulse to understand their world.

Last year we took a bold step to offer students a learning opportunity to both enrich their understanding of environmental stewardship and allow them to be fully in control of their inquiry. The result was a sixteen-week student-driven inquiry collaboration we called Earth Pals.

Earth Pals is a multifaceted technology integration project collaboration between two schools, encompassing two libraries and two classrooms. Students in grade 3 at Longfellow Elementary in Columbia, Maryland, and Rossville Elementary in Rossville, Indiana, identified ways in which their classes could make a positive impact on the environment. Choosing to focus on recycling (Rossville) and energy conservation (Longfellow), the students devised practices that could facilitate change and be replicated throughout the school and educational communities.

Our focus with Earth Pals was to create a student-centered, student-driven research project in which third graders investigated a problem they encountered daily and proposed solutions that could be tested and measured for change over time. Inspired by TED talks, we designed the project framework around the end goal of a presentation created by the students and delivered to peers, staff members, and the online community in which the project and research were explained and the audience was challenged to think differently about the world around us. 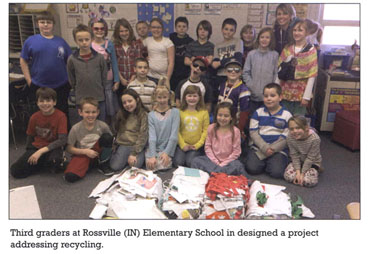 Sherry Gick (school librarian for Rossville Consolidated Schools) and Matthew Winner (teacher librarian at Longfellow Elementary) collaborated via Twitter and a Google Doc to design the unit framework. After the main vision was articulated, each recruited a classroom teacher to work with hand-in-hand to create an enriching and meaningful research project. Winner enlisted the help of Albert Yoo (grade 3 teacher) and later, Tina Lewis (reading specialist and support teacher), and the three established a timeline for investigation, reflective and statistical writing, and presentation. Meanwhile, Gick collaborated with Gretchen Welk (grade 3 teacher) to create blocks of time and activities for third-grade students to work in groups to explore, discover, create, and share their findings.

Our objectives with Earth Pals were for students to be able to identify a problem in their school environment, propose a solution to the problem, collect data based on the implemented solution, and present findings to the school and online community at the conclusion of the research. Earth Pals incorporated each of the International Society for Technology in Education's (ISTE's) National Educational Technology Standards (NETS) in an authentic learning environment, at the same time connecting with many of the AASL standards for the twenty-first-century learner.

Student inquiry was based on the central question, "What is a problem within the school that's affecting our environment, and what actions can we take to impact the problem for the better?" Prior to the two classes meeting, each teacher librarian introduced their students to the format and structure of TED talks using such examples as Adora Svitak's "What Adults Can Learn from Kids" (available on YouTube). Students identified many environmental issues they could address by making changes to school routines, and each class selected its project focus prior to connecting with the sister school on Skype for the first time. Gick's students determined that too much recyclable material was being put in the waste. They created a plan to recycle materials and collect data on how much refuse they were saving from the landfill. Winner's students noticed how many lights and technology tools were left on when not in use. They saw an opportunity to measure the cost of energy used by common school technology tools over the course of a school year and suggest ways the school could save money by cutting down on energy consumption.

Winner's and Gick's classes stayed in contact throughout the data collection process, exchanging new findings and asking questions. Regular contact using Skype, Edmodo, and Today's Meet allowed students to get to know one another and work collaboratively. And because the sister school had a vested interest in the home school's work, students were motivated to not only test their ideas but also to identify a process that would be replicable in other schools and result in the same findings. In short, the students had a real audience that extended outside of the school building, and their work had validity based in real-world context, a quality unfortunately lacking in school instruction.

When it came to measuring an observable change, each class selected a method that best fit their information need. Once again, students were allowed to discover and explore methods together while teachers facilitated. In Rossville, students measured the weekly paper's weight in pounds and also the height in inches. After a few weeks, the students discovered weight was the most accurate measure and chose not to continue with other measures. Students recorded each week's weight on a chart. After eight weeks, they created graphs and calculated the ripple effect of their project across grade levels and the elementary school. 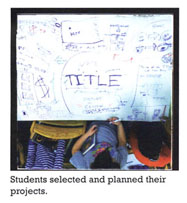 At Longfellow, students measured energy consumption of various technology tools using voltmeters. By plugging the tool directly into the voltmeter, students were able to determine the cost of the tool in use over the course of the school day and the unexpected cost of simply having the machine plugged in. The students then recorded the information onto a spreadsheet and created formulas to determine the amount of energy used in a school day, week, and year for all of the equipment in the building, as well as the costs associated with the use.

The final step in the project was for the students to synthesize their findings to share the results. Each school created an infographic using Prezi, a dynamic presentation tool allowing students to share images, graphs, and other data. The students delivered the presentation first to their Earth Pals in the sister school and then to their peers and school staff. What we hoped as teachers would be an engaging and meaningful learning experience for our students far exceeded anything we could have anticipated. Our collaboration was even awarded the SIGMSTechnology Innovation Award by ISTE. 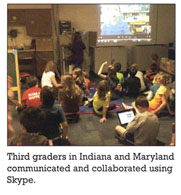 This year we hope to replicate the process with a different group of students and to invite other schools to participate. If you'd like to learn more about our Earth Pals project or read a more detailed description of our processes, please visit the following link: http://sqworl.com/bk4700.

Matthew Winner is a teacher librarian for Howard County Public Schools in Maryland. In 2012 he was named MSET's Maryland Outstanding Educator Using Technology, and in 2013 he was named a Library Journal Movers & Shakers Tech Leader. Follow his library adventures at BusyLibrarian.com or on Twitter at @MatthewWinner.

Sherry Gick is the school librarian for Rossville Consolidated School District in Indiana. She is part of the Eliot Rosewater selection committee of Association of Indiana School Library Educators and was named to the 2013 Indiana Library Leadership Academy. Find her at thelibraryfanatic.com and on Twitter at @LibraryFanatic.