Historically, the social, political, and economic systems of Native American culture groups were tremendously diverse, ranging from hierarchical systems based on various social statuses to more egalitarian systems. Many culture groups were and still are matriarchal, matrilineal, and/or matrilocal. The Apache of the southwest, for example, trace their lineage through the mother’s line; all children belong to the mother’s family. Among the Iroquois nations of the northeast, women performed all of the agricultural labor and controlled the distribution of their produce, thereby exerting both social and political authority. Iroquois women were also politically active, as were women in many southeastern culture groups such as the Cherokee.

The pre-contact social systems of all Native American tribes underwent great change beginning in the early contact period and continuing today. For instance, the arrival of horses (which migrated from Mexico after arriving with the Spaniards in the early 1500s) had a tremendous impact on the cultures of many Native American groups, most notably those on the Plains, who became much more mobile. This increased mobility encouraged a period of prosperity for Native American groups whose hunting territories were expanded. Horses quickly became an integral aspect of the spiritual, economic, and political culture of many Plains groups such as the Kiowa, the Sioux, and the Cheyenne.

Another major change for all Native American groups has come about through assimilation, both forced and voluntary. The U.S. government and the American people undertook varied efforts to assimilate Native Americans, including but not limited to various federal policies, education, particularly through the boarding school system, religious acculturation, and the reservation system, which simultaneously physically separated Native Americans from the rest of U.S. society and imposed non-Native forms of housing, land use, and agricultural and hunting methods.

The Role of Mothers and Grandmothers

In many Native American cultures both historically and today, the social and biological roles of mother and grandmother were and are accorded great respect. In many cases, this respect has sacred precedent, as many Native origin stories credit women with the creation of Turtle Island (North America) and/or with the provision of foods such as corn, beans, and squash. Many Native American cultures were matrilineal, matrifocal, matrilocal, or some combination of the three. In these cultures, mothers and grandmothers were largely responsible for the teaching and socialization of children, particularly during early childhood. As they grew older, however, young boys were expected and encouraged to spend more time with men in the community, although young girls generally stayed in the company of women. As mothers and grandmothers, women exerted social and political authority both within the community and in relationships with outsiders, including Europeans. This relationship was never limited strictly to biological relationship; adoptive and metaphorical motherhood, and particularly grandmotherhood, was and remains common.

The authority of women over their motherhood was both indirectly and directly targeted for centuries following initial contact with European nations, as settlers and missionaries sought to alter the social and political fabric of Native American cultures. For instance, throughout the 17th century, Jesuit missionaries in the northeast attempted to impose models of marriage in which one man and one woman remained married for life, and the children of the marriage were identified through the father’s line. During the early colonial period, many Europeans settlers refused to negotiate with what they referred to as “petticoat governments” and rejected the public authority of Native American women. By the end of the 19th century, after most Native American nations had been confined to reservations, the boarding school system began 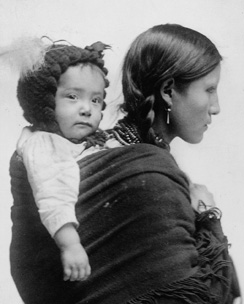 A 1901 photograph of a Native American mother from the Plains region carrying her baby on her back.

In the southwest during the 300-year period between 1492 and the dawn of the 19th century, similar tensions developed between Native American tribes such as the Keres, the Tewa, and other Pueblo peoples, and the Spanish and Mexican settlers.

After the American Revolution, the relationship between the United States and Native American tribes evolved to encompass more trade agreements and specific military alliances. Very quickly, however, treaty negotiations and military engagements centered on land rather than trade or alliance.

Between 1820 and 1840, approximately 90,000 Native Americans were forcibly removed from their homelands with the Indian Removal Act. The exact death toll of what became known as the Trail of Page 898  |  Top of ArticleTears is unknown, but estimates hover between 20–25 percent, mostly children and elders. In 1824, the U.S. Congress officially formed the Bureau of Indian Affairs (located at the time in the War Department). In 1862, the Homestead Act opened up Indian land in Kansas and Nebraska to homesteaders. As a result, 20 tribes in these states had to be relocated. After the Civil War ended in 1865, the first missionary-operated Indian schools were opened with the financial support of the federal government. In 1887, Congress passed the General Allotment Act (Dawes Act), which broke up reservation land bases and assigned parcels of land to individual families. Land that was left over after each (male) head of household had received their allotment was opened up to settlers, resulting in a total land loss of about 90 million acres for Native Americans collectively.

Between 1906 and 1909, the federal government under President Theodore Roosevelt transferred over 2.5 million acres of land from tribal control to national forests. In 1921, Congress formally provided funds for the health care of Native Americans through the Snyder Act. In 1924, Congress bestowed full citizenship rights on all Native Americans, despite the protests of many Native American people who did not want to become U.S. citizens. In 1934, the Wheeler-Howard Act (or Indian Reorganization Act) provided for tribal ownership of land, thus reversing portions of the Dawes Act, and encouraged the development of tribal governments after the model of the United States. In 1950, the official federal twin policies of Termination and Relocation were instituted with the goal of lessening federal responsibility to Native Americans through relocating mass numbers from reservation land bases to urban centers.

This resulted in the loss of federal services and protection for 61 tribes, bands, and communities. Termination policy was eventually phased out with the formulation of the Indian Self-Determination policy in 1970. In 1975, the Indian Self-Determination and Education Assistance Act permitted tribes to participate in all federal social programs and services relating to Native Americans and provided funds for public schools on or near reservations. In 1978, Congress passed the American Indian Religious Freedom Act as well as the Indian Child Welfare Act. The Indian Tribal Government Tax Status Act was passed in 1983, confirming that Native American nations are not taxable entities. In 1990, the Native American Language Act reversed official policy of suppressing Native American languages and cultures, and the Native American Graves Protection and Repatriation Act required federal agencies and federally funded museums to return human remains and sacred objects to tribes.

The extreme population decrease is due to a variety of factors, including but not limited to: war, disease, massacres, boarding school abuses, high suicide rates, high rates of sterilization of Native American women, and federally imposed recognition policies that restrict tribal enrollment numbers. The Census Bureau projects modest growth by Native American communities in the next few decades, topping 5 million individuals by the year 2065 and comprising 1.1 percent of the population. Today there are 569 federally recognized Tribal Nations in the United States. About 20 states have policies that allow Native American nation recognition on the state level, even without federal recognition.

Heart disease, cancer, and unintentional injuries are the leading causes of death for Native Americans and Alaska Natives.