A veteran of the American Revolution (1775–83) named William Mooney founded the Tammany Society in New York in 1789. The name came from a Delaware chief, Tamanend, who supposedly developed a friendship with William Penn (1644–1718), an American statesman.

By 1800, the Tammany Society was a powerful political machine (unofficial political system based on behind-the-scenes control and favors given and collected, usually between politicians and big business). In 1830, the society's headquarters were established in a New York City building that became known as Tammany Hall. From that point on, the society itself was referred to by the same name.

In the mid-1800s, hundreds of thousands of Irish immigrants arrived in New York City searching for religious freedom, food, and steady work. They were a loyal group, willing to use any means necessary to get what they needed, and had what many believed to be a natural propensity for politics. Tammany Hall membership came to include many Irish, who were willing to give their votes in exchange for food and money.

Tammany Hall elected its first New York City mayor in 1855, and for the next seventy years, the city government would be dominated by Tammany politicians. One of its most infamous, William Marcy “Boss” Tweed (1823–1878) never became mayor, but was considered the most influential person in the city. Tweed essentially controlled any mayor in office, and appointed so many of his friends to political positions in New York City that in 1870, he was able to pass a charter allowing him and his friends—known as the Tweed Ring—to control the city treasury.

Tweed's crimes were many. He and his cronies faked leases on city-owned buildings, padded bills with charges for repairs that never happened, and bought overpriced goods and services from suppliers controlled by the ring. All in all, they managed to steal between $30 million and $200 million from the city between 1865 and 1871.

Tweed's most notorious deed was the construction of the New York County Courthouse, begun in 1861. In one example of the corruption involved, he paid a carpenter $360,751 (equal to $4.9 million in modern value) for one month's worth of work. But the courthouse had very little woodwork throughout its rooms. Three tables and forty chairs cost $179,729 (equal to $2.5 million). A plasterer received $133,187 (equal to $1.82 million) for two days' work. These laborers were friends of Page 1513  |  Top of ArticleTweed. Tweed himself profited from a financial interest in the quarry that provided the marble for the courthouse.

Tweed also controlled the Democratic Party of New York City. By 1870, he was appointed commissioner of public works. This position 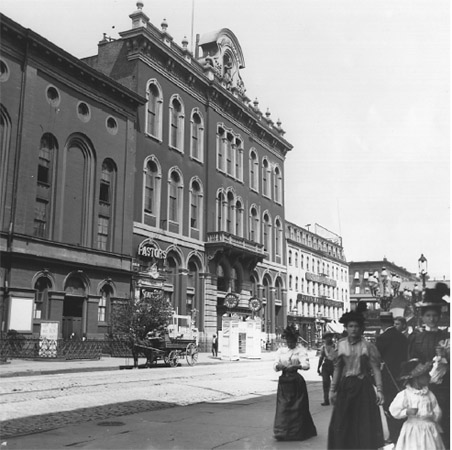 Tammany Hall in New York City was the headquarters for the powerful Tammany society. Through corruption and intimidation, Tammany Hall controlled politics in New York for seventy years. AP IMAGES

gave him even greater opportunity to steal the city's money. Tweed also organized the development of City Hall Park. His original estimate for the project was $350,000. By the time he had completed the job, spending had escalated to $13 million.

On July 21, 1871, the New York Times published some of the contents of New York County's financial records. When the public realized that Tweed was paying his friends $41,190 for a broom and $7,500 for a thermometer, an investigation ensued. In 1873, Tweed was arrested, found guilty of corruption, and sentenced to twelve years behind bars. He served only two years but was rearrested almost upon release. New York sued him for $6 million. Tweed died in a New York prison on April 12, 1878.

Tammany Hall remained corrupt and powerful into the twentieth century, and it was not until the 1930s that it lost its influence under a reform-minded mayor, Fiorello La Guardia (1882–1947). Mayor John V. Lindsay (1921–2000) put an end to Tammany Hall in the 1960s.