Eli Whitney was an inventor whose inventions had a lasting impact on the economy of the United States. The cotton gin he designed allowed more cotton to be processed and exported from the southern states. His concept of interchangeable parts revolutionized industries in the northern states by enabling mass production. 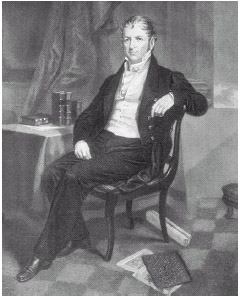 Inventor Eli Whitney's inventions significantly influenced the economy of the United States. THE LIBRARY OF CONGRESS

Eli Whitney was born in Westboro, Massachusetts , on December 8, 1765, to Eli and Elizabeth Whitney. His father was a farmer, and the younger Eli spent much of his youth helping on the farm. He liked spending as much time in his father's shop as he could.

During the American Revolution (1775–83), when Eli Whitney was fifteen he maintained a side business making nails. When the war ended, his business evolved into making hatpins. He later took a teaching position in order to pay for college. He graduated from Yale in 1792. After college, Whitney moved south to Georgia . He intended to take a tutoring position while studying to become a lawyer, but the tutoring post was filled before he arrived.

Whitney was befriended by Catherine Greene (1755–1814), the widow of General Nathaniel Greene (1742–1786). She invited him to stay at her plantation as her guest while he pursued his interest in law. While there, he became friends with the manager of the plantation, Phineas Miller.

At the plantation, Whitney and some other guests discussed the complications of growing cotton . It seemed that English cotton mills were hungry for greater exports from the South. Black-seeded cotton, which was easy to clean after harvest, grew only along the coast. The green-seeded kind that was easily cultivated inland was difficult to clean. Typically, it took one person an entire day to clean only one pound of green-seeded cotton.

It was apparent that a machine that could easily clean the cotton could change the southern economy and make the inventor rich. Whitney turned his attention to the problem and began working on a model. By April 1793 Whitney had perfected a machine that enabled a person to clean fifty pounds of cotton per day. He called it the cotton gin.

At the end of May 1793 Whitney entered into a partnership with Miller to start a business manufacturing cotton gins. Whitney obtained a patent for his invention in March 1794, but many imitations of the gin quickly appeared. The machine was copied to such an extent that Whitney and Miller's business proved unsuccessful and closed in 1797.

Whitney filed lawsuits against those making variations of his invention. It wasn't until 1807 that a court supported Whitney's patent rights, but his application for a renewal of the patent in 1812 was denied. Meanwhile, the cotton industry exploded throughout the southern states. In 1790 the annual production of cotton was about four thousand bales; by the 1840s it was over one million bales, 60 percent of the world's supply. Throughout the growth in production, Whitney received practically no income from his invention.

Whitney realized that he was unlikely to get much money from his invention of the cotton gin, so he turned his attention to another task. His reputation as an inventor and businessman was so respectable that he had little difficulty finding the financial backing to pursue his next business.

In 1798 the United States was seeking production of forty thousand muskets. The process of making them was slow and difficult because each one had to be made by hand. By hiring private contractors, the government hoped to make these muskets faster.

Whitney secured an ambitious contract to produce ten thousand muskets in less than two years. With a concept in mind, he worked to establish a factory where the muskets could be produced quickly, with machines. Though he was unable to produce the arms in the two years promised, the government patiently supported Whitney's endeavor.

Over the course of the next nine years, Whitney devised a system of machines that together produced a musket. Each machine could be operated by an unskilled laborer to produce a part that could go into any of the muskets made at the factory. The concept of interchangeable parts simplified industry, sped up production, and made repairs of muskets easier to handle. As a result, factories for mass production sprang up throughout the northern states and changed the economy there, just as Whitney had changed the economy in the South.

Though Whitney was very late in producing the arms promised to the government, he succeeded in building a business that could fulfill large orders quickly. He built a factory in Whitneyville, Connecticut , and continued his business. In 1812 he was awarded another federal government contract, as well as one from New York . This time the business was financially rewarding for Whitney.

Because of his business difficulties, Whitney married late in life. On January 6, 1817, he married Henrietta Frances Edwards. Three of their four children survived Whitney, who died in New Haven, Connecticut, on January 8, 1825.