Memorial Day is a special time for Americans. Few patriotic events conjure up the emotion, commemoration, and gratitude of the nation like the remembrance events on the last Monday of May each year, when all across the United States, and even abroad, Americans set aside time to remember those who have fallen in defense of our nation. But few citizens stop to think of the history of the day, which appeared shortly after the Civil War as an effort to remember the dead of that conflict.

One newspaper summed up the historic role of Memorial Day in 1869 as "a memorial day as useful and suggestive to the living as it is significant and grateful to the dead," and went on to describe the effort: "To strew flowers on the graves of the heroes is at once a pious and patriotic tribute, done in the simplest and most touching way. This right of affection, not too public for the most modest and retiring woman in her own secluded way to celebrate, yet not too lowly for the loftiest citizen to disdain, is one of those very few customs which a nation may be proud to have originated and maintained" ("Decoration Day," p. 4). Moreover, this decoration activity at cemeteries across the United States, both North and South, played a major role in the eventual reconciling of the two sections after the war.

Historians are hard pressed to pinpoint the exact date of the first Memorial Day. Some argue that it began haphazardly even during the war, while others point to a period Page 245  |  Top of Articleimmediately after the conflict ended (Blight 2001, pp. 65–70; Neff 2005, 136-137). One of the earliest mentions of an actual day termed "Memorial Day" came in 1868, when on May 30 the town of Lafayette, Indiana, decorated the graves of its Civil War dead. Even this early, however, there was some crossing of the sectional lines and a desire to reconcile the North and South. The New York Times reported that the decorators of the Indiana cemetery received a wreath and a note from a little girl which read, "Will you please put this wreath upon some rebel soldier's grave? My dear papa is buried at Andersonville, and perhaps some little girl will be kind enough to put a few flowers upon his grave" ("An Incident of Memorial Day," p. 3). The officials did so, laying the wreath on the only Confederate grave in the cemetery. 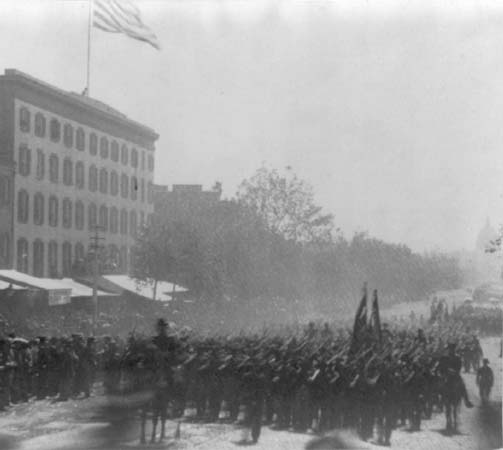 Veterans on parade at war's end. In the late 1860s, veterans' organizations pressed for the observation of a holiday to honor the nation's fallen soldiers. Americans celebrated with solemn parades and floral wreaths not only for the troops who perished in the Civil War, but also those who died serving the United States in previous conflicts.The Library of Congress.

Most sources point to 1868 as the actual birth of the yearly Memorial or Decoration Day tradition, however. The Grand Army of the Republic was a leader in the effort, one story saying its commander was given the idea by a Philadelphia woman who had traveled around the South and "had noticed the Southern women decorating the graves of their dead, fallen in battle" ("Memorial Day," p. 4). Another story stated that an anonymous member recommended the idea (Neff 2005, p. 137). By 1869, however, numerous events were held across the nation, in both North and South, and in that year the Page 246  |  Top of Articletradition was referred to by the New York Times as being "introduced into the national calendar" ("Decoration Day," p. 4). The paper described the 1869 event in New York: "there was no lack of attendance at the cemeteries, where thousands participated in the beautiful and appropriate ceremony of decorating our heroes['] graves with flowers" ("Decoration Day," p. 4).

Throughout the Reconstruction era as well as the 1880s, most Memorial Day observances were localized efforts to decorate soldiers' graves in local cemeteries, and not just the Civil War dead. William T. Sherman gave an address at a St. Louis Memorial Day event in 1875 and also mentioned other veterans buried in that particular cemetery: "men who fought for the honor of our common country against the foreign foe before most of us were born; others who brought from Mexico and our Indian borders seeds of disease which caused their death" ("Gen. Sherman on Memorial Day," p. 2). There was also an effort by the Grand Army of the Republic to make this effort both national and permanent in scope, and success would ultimately come when Congress made the day an official holiday for both sides in 1889. To be sure, the effort to memorialize the dead had crossed the sectional lines by that time. "Both Union and Confederate graves decorated in Maryland," read the Washington Post in 1879, with the practice becoming more common as the years passed ("A Day of Remembrance," p. 1). "Speeches were delivered and the graves of the Confederate and Union dead were decorated," read another newspaper in reference to ceremonies in Charleston, South Carolina, in 1888 ("Memorial Day in the South,"p. 1).

Not surprisingly, the national cemeteries across the land were special favorites for Memorial Day observances, especially those that sat on or near the developing national military parks in the 1890s and beyond. Special observances were held each year at places such as Shiloh, Tennessee, Vicksburg, Mississippi, Antietam, Maryland, and Gettysburg, Pennsylvania. At Shiloh each year in the 1890s and early 1900s, the local Grand Army of the Republic post placed flags on the Union and Confederate graves, despite several years of rain on the specific day, prompting park officials to refer to their "customary rain" (Smith 2004, pp. 14, 102). Each year at Gettysburg, one newspaper reported, "the children of the public schools covered with flowers the thousands of graves" ("Triumphant March of G.A.R.," p. 10).

Since the official holiday was declared, Memorial Day has become a part of almost every American's yearly remembrance, and today is no different. Whether Americans watch on television the elaborate ceremonies at Arlington National Cemetery where the President of the United States lays a wreath at the Tomb of the Unknowns or attend the local ceremonies at one of the many national cemeteries across America, they do so for the same purpose: to remember, honor, and commemorate, just like those first pioneers of the Memorial Day tradition did immediately after the Civil War.

The Golden Age of Battlefield Preservation: The Decade of the 1890s and the Establishment of America's First Five Military Parks. Knoxville, TN, 2008.

Smith, Timothy B. This Great Battlefield of Shiloh: History, Memory, and the Establishment of a Civil War National Military Park. Knoxville, TN, 2004.