FOODWAYS. The term "foodways" refers to the connection between food-related behavior and patterns of membership in cultural community, group, and society. In its most general usage, "foodways" refers to the systems of knowledge and expression related to food that vary with culture. For example, in modern America, food-ways continue to represent cultural diversity within an increasingly interwoven society. In specific usage, "foodways" refers to those food-related behaviors that are believed to identify the primary cultural attributes of an individual or group of individuals; for example, it is in their foodways that Northern Italians are most easily distinguished from Southern Italians and Sicilians.

The first American usage of "foodways," without attribution of coinage, occurs in writings of the folklore initiative within the cultural New Deal—the program of civic reinvestment created by the administration of President Franklin D. Roosevelt in the early 1930s to combat the effects of the Great Depression. In a host of anthology publications, the publicly supported folklore work of the Federal Writers' Project celebrated American "stuff": traditional culture more easily identified by Page 30  |  Top of Article 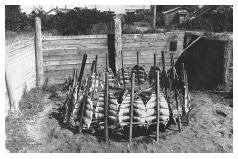 The Makah Tribe prepares salmon for Makah Day Dinner, Neah Bay, Washington. COURTESY OF THE NATIONAL ARCHIVES AND RECORDS ADMINISTRATION.
its prevalence than its longevity. The director of the project's folklore activities, Benjamin Botkin, instructed fieldworkers to gather the evidence of tradition and creativity among America's living regional, ethnic, occupational, and spiritual communities—work songs, the calls of street vendors, festivals, tall tales, superstitions, and foodways.

In this context, foodways is a silent member within a category of expressive genres; like a festival, it is a "performed" tradition whose "texts" are activities that can be observed, and perhaps sampled, but are as emblematic of the people who produce those texts as the more conventionally recognized folk expressions that comprise collections and anthologies of published folklore. Botkin and his contemporaries also used the term "foodlore" on occasion to refer to foodways since, like folklore, it is a canon of shared beliefs or "lore" that is widely held but limited to a certain culture or situation.

Like its kindred terms "folkways" and "lifeways," "foodways" often echoes the popular anthropology of the 1950s—language carefully, if transparently, tailored to avoid infection by ethnocentrism and tuned to the broadest level of cultural comparison. Foodways is seen as a component of every culture, large or small, but one among several components artificially constructed at a level of analysis and comparison, just above the degree of particularity that might enable it to be easily understood. In its specification of the edible universe, foodways implies other categories containing elements equally innocuous yet laden with meaning: "shelterways," "clothesways," and perhaps "homeways," "workways," "schoolways," "healthways," "leisureways," or even "deathways." Each of these terms is logically sensible, but only "foodways" found its way, if by a slim thread, into contemporary usage.

The term "foodways" survived a period in folklore studies, roughly from the mid-1950s into the early 1970s, when what is now generally referred to as "material culture" in the United States did not rank as highly as the spoken word and the performed arts within the canon of folk expression. It is largely through the efforts of Don Yoder and Warren Roberts that the term was carried from one generation to another, from a period of relative low American academic interest into the current state of broad, heightened engagement.

In "material folk culture," the summary phrase of Henry Glassie's broad and renewing scholarship, food-ways found revived utility in folklore studies. At the University of Pennsylvania and Indiana University, respectively, Yoder and Roberts prepared two generations of students to uphold broad applications of the term "tradition" (that is, inclusive of material folk culture) in their research. Since the late 1960s Yoder has documented the bearers of Pennsylvania's traditions, including those engaged in foodways, for the annual Pennsylvania Folklife Festival—an early example of collaboration between scholars and the general public that would arise later at the national level.

Since the 1970s, the percentage of American folklorists entering academe has been small in comparison to the number working in government-supported positions, located in arts-granting agencies, archives, and libraries as well as in foundations that are actively supporting the application of research to social issues. In both research and public programs, the early twenty-first-century generation of folklorists, more than half of whom were students of Yoder and Roberts, have found material expressions of tradition particularly useful in demonstrating the resilience of folk culture, the fundamental—and key—assertion of folklorists involved in public education.

In the 1980s, as the growing number of governmentbased programs continued to exercise their commitment to inclusion, many sought to engage recently emigrated peoples from Southeast Asia and Central America as nascent communities. With often limited resources, and language and translation challenges to contend with, a number of folklorists found in foodways a common ground for the presentation and comparison of contemporary tradition in action. In 1969, the Smithsonian Institution's annual Festival of American Folklife—whose advisory board over the years has included Yoder, Roberts, and Glassie—first presented foodways among festival programs that focused upon featured states or regions, ethnic communities, and occupational groups. Since its inception, the festival has included foodways as a way of focusing upon traditionally acquired skills and shared community values.

At the Smithsonian, the presentation of foodways in a festival setting became a model—a work-in-progress—that was emulated by state folklife program coordinators and festival directors. Built upon a foundation of field research that placed culinary traditions within the context of folklife genre, festival foodways presentations co-opted Page 31  |  Top of Article the "cooking show"—a presentation model made familiar by county fairs, food stores, and television. Here folklorists interviewed traditional cooks in the midst of preparing food and defined, in a way that few other public programs could, the concepts of observation and imitation, informal apprenticeship, and shared standards of appropriateness and taste.

In the early twenty-first century, foodways has generated little scholarship; however, many scholars have focused upon the cultural exchange within so-called food events, often attending to customs found in large-scale and socially significant occasions. Others, particularly those who work in both academic and public sectors of the discipline, have successfully identified matters of cultural consequences found in foodstuffs that are rapidly being depleted in their natural supply by commercial expansion into formerly wild areas. Folklorists Suzi Jones and Lynn Martin Graton, working in Alaska and Hawaii, respectively, have used the concept of foodways to describe and explain native and immigrant communities, natural resource management, and the viability of folk cultural processes.

There is both opportunity and need for more comprehensive foodways scholarship, the reappraisal of food-related traditions as a medium for creating cultural identity, and attention to the responsibilities of active tradition-bearers as teachers, conservators, and innovators. With improved standing in the American academy and the well-earned support of government agencies, food-ways is poised to accommodate and frame the rapidly converging interests of scholarship and civic engagement.