GEOGRAPHY. Food is grown in a one place, distributed to another place, and eaten in yet another place. Food is affected by culture, by economics, and by politics. Food affects our bodies, our relationships with other people, and our relationship with the land. This is the "food system," a system that encapsulates where and how food is produced, how it reaches our mouths, and why we eat what we do.

Anthropologists, nutritionists, historians, sociologists, and philosophers have long been concerned with different aspects of the food system. So too—and increasingly—are geographers.

Geography has a lot to say about food. A subject often misconceived as being concerned solely with maps and mapping, it is actually a philosophically and topically pluralistic discipline that is concerned with spatial processes in the human and physical environment. With a focus on both the spatial aspects of human existence and natural features, geographers are uniquely qualified to study a system that is, as Atkins and Bowler say in Food in Society (p. 13), "squeezed into a fault line between environment and society." Geographers seek to conceptualize the food system as a spatial construct that is driven in part by processes that operate from one physically definable and socially constructed space to another. Scale-dependent concepts such as regional, local, and global, location, place, and space, are the basis of questions geographers ask of the food system: Where is food grown and why? What are the processes controlling the movement of food from place to place? Why do we eat what we do? Why do we buy food where we do? How is food consumption related to production? Why is food consumption high in some parts of the world and low in others? Geographers think spatially. They also think systematically, theorizing about the relative roles of the environment and human beings as participants in the system under study and how they interact.

In the academy there are many different types of geographers, all of whom have a potential interest in food. Physical, economic, social, urban, rural, cultural, medical, and agricultural geographers all have their respective emphases on the analysis of the food system. All told, they study the production, consumption, provision, and distribution of food, from the local to the global, from feast to famine. And, as a tool, geographers can use relatively new computer-aided mapping techniques, especially geographical information systems (GIS) to map and analyze spatial data as it pertains to food systems.

Food production and how and why it varies over space is studied in physical and human geography. Physical geographers seek to explain the spatial arrangement of food crops throughout the world by analyzing the environmental factors that limit or promote food production, such as climate, soil, and topography. Human geographers look to the explanatory power of history, economics, and politics and place a greater emphasis on the role of agricultural (food production) systems in affecting how much food is produced and where. They seek to describe the systems—whether as subsistent, intensive, extensive, or industrial—and ask how social, organizational, and technological changes within the system are affected by spatial processes and how they in turn affect spatial outcomes. Geographers have helped pioneer the understanding of food production as an "industrialized" system, a system bound up with processes of economic development that subsequently affects where and how much food is produced.

Food production also has an impact on the environment. One of the first disciplines to recognize the human 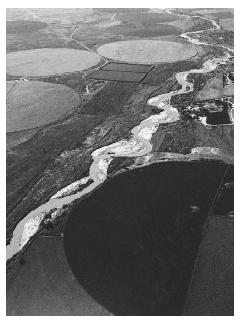 The influence of food production on geography is clearly evident in this aerial view of Kansas farmlands. Circular fields designed to accommodate irrigation systems cluster around a free-flowing river while open grasslands occupy the intervening space. COURTESY OF AP/WIDE WORLD PHOTOS.
impact on the environment, geography has long identified the environmental impact of modern agriculture. Hydrologists and soil scientists measure the impact of fertilizers, pesticides, and irrigation on water and soil quality. Desertification and deforestation are environmental issues identified by geographers as outcomes, in part, of food production. In turn, rural and developmental geographers take up the challenge of assessing the impact of environmental changes on local people and national economies.

In terms of food consumption, geographers argue that "place matters" in what people eat. Traditionally, geography has looked at regional patterns of diet, but over the past three decades focus has shifted to the symbolic meaning and cultural identity of food—to the way, in other words, that human beings use food to construct a place-related identity, either real or imaginary. Cuisines create a sense of identity; restaurant locations indicate spatially spreading food trends; the perception of what is "ethnic" and "local" food reveals the way we see ourselves fitting into society socially and geographically.

Food provision and retailing are another aspect of consumption studies within geography. Geographers seek to explain the spatial patterning of food retailers: Why, in many cases, do certain neighborhoods have very few food stores while others are supersaturated? Using the notion of "competitive spaces," geographers in the United Kingdom have been able to identify supermarket locating decisions as a response not only to state-imposed locational regulations, but to the market advantage of locating in a "competitive space."

Geography also asks how spaces of food consumption are linked with spaces of food production. An inherently geographical phenomenon, food is distributed in a variety of ways: national transportation systems, global trade, or local exchanges. Geographers have extended the study of these food distribution networks by seeking to uncover the relations between the site of raw food production and the site of consumption. Using the conceptual approach of "commodity chains," geographers trace food items from the point of consumption back through the chain of retail, wholesale, processing, and agricultural production, taking into account transportation, labor processes, technology, and politics. And in the related "food network" concept, institutional intermediaries such as state regulation and international agreements are added into the chain. Developments in this field have been spurred by increasing worldwide interest in the trend toward the replacement of national by international institutions, global sourcing of products, and the centralization of strategic assets, trends often conceptualized by the term "globalization." Geographers have highlighted, in particular, the local, regional, and national response to globalization, often finding that globalization in some way strengthens the local nature of food production.

Linking food production and consumption in terms of supply and demand is also very much part of the geographical tradition. Geographers ask why it is that in some regions and communities of the world people do not have enough to eat, whereas in others there is overnutrition. Some geographers analyze the spaces of hunger in terms of economics and social relations, others in terms of population growth and environmental limits on food production. Again, geographers are uniquely poised to ask questions about society and the environment. Space, it seems, unites them both.

Bell, David, and Gill Valentine. Consuming Geographies: We Are Where We Eat. London: Routledge, 1997.