The term "Midwest" first appeared in print in 1880 to describe the Kansas-Nebraska region and was enlarged by 1910 to include all twelve of what are now considered the midwestern states: Illinois, Indiana, Iowa, Kansas, Michigan, Minnesota, Missouri, Nebraska, North Dakota, Ohio, South Dakota, and Wisconsin. Geographic features of what are now considered the midwestern states include wide and fertile river valleys, limestone bluffs overlooking rivers and lakes, broad expanses of grasslands, the Great Lakes, the dry and rocky Badlands of the Dakotas, the deciduous woodlands of the northern Midwest and southern Missouri, the sandhills of Nebraska, and wetlands.

According to the geographer James R. Shortridge, "midwestern" connotes pastoralism, small town life, hospitality and friendliness, traditional values, farmers, yeoman society, and the Jeffersonian ideal. "The Midwest is America's pastoral face," he says, "etched into our consciousness as a permanent physical location, despite the presence of industrial cities" (Fertig, 1999, p. 30).

The most prominent geographic feature of the Midwest is rolling grassland or prairie. But of the 400,000 square miles of prairie that once stretched from central Ohio westward to the foothills of the Colorado Rockies and from Alberta, Manitoba, and Saskatchewan in Canada south to central Texas, less than 1 percent has remained natural prairie (Fertig, 1999, p. 166).

Before European settlement of the Midwest, Native American tribes gathered wild foods, such as native persimmons, papaws, berries, nuts of all kinds, and prairie turnips (Wilson, 1987, p. 119). Wild rice, really an aquatic grass, not a true rice, is the only grain native to North America, and it was a staple food of the Sioux and Chippewa tribes. Wild rice grows in the lakes and rivers of Minnesota, upper Michigan, northern Wisconsin, and lower Canada (Fertig, 1999, p. 223).

Midwestern cooking reflects both the bounty of the land and the ethnic diversity of the population. Favorites include wheat and honey buns, kolaches (fruit-filled sweet yeast dough pastries, originally kolače), traditional breads of all kinds, steaks, hamburgers, fried chicken, and pot roast. Locally brewed wheat beers are enlivened with a squeeze of lemon and accompany a bowl of chuck wagon chili zipped with the heat of peppers. Crisply roasted pheasant and other game delicacies are autumn treats. A piece of homemade pie and a cup of coffee welcome a newcomer, provide a warm and homey occasion for catching up with all the gossip, or bring a sweet ending to a family dinner.

City dwellers start the day with a cup of coffee and a bagel or a piece of toast. For farm families a hearty breakfast of bacon or sausage, eggs, biscuits or toast, and hash browns is more common. Lunch is a sandwich or salad and soup, perhaps a favorite bean soup. For dinner farm families might enjoy a slow-simmered pot roast or stew that has cooked all day. Midwesterners are also fond of casseroles, known as "hot dishes" in Minnesota, that can be assembled early in the day and baked later on. City households might have pasta, grilled chicken, or steak. 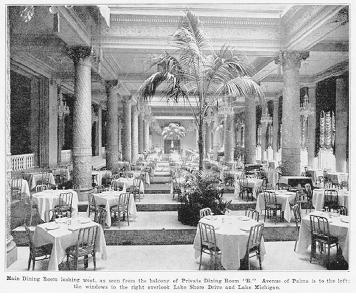 The main dining room of the Drake Hotel on Lake Shore Drive, Chicago in 1928. During its heyday, the Drake and its famous menus represented the ultimate in fine dining in the Midwest. ROUGHWOOD COLLECTION.
featuring chicken fried in lard, garden vegetables, and homemade pies and cakes. The Door County Fish Boil is an ongoing summer ritual in Wisconsin in which white-fish, potatoes, and onions are boiled to overflowing in an outdoor cauldron.

During the late 1700s and early 1800s settlers from the original thirteen American colonies began to move westward into Ohio, Indiana, Illinois, and Michigan. French settlers had already established villages along the Mississippi River in what is now Illinois, Missouri, and Iowa, and along the Missouri River in what is now Missouri and Kansas. These small settlements began to grow as the Louisiana Purchase, acquired by President Thomas Jefferson in 1803, opened up vast tracts of land for settlement. Between 1865 and 1880 Kansas attracted more immigrants than any other place in the nation. The promise of virtually free land and a chance to start over drew thousands to the rolling prairie. The first Homestead Act, passed by Congress in 1862, enabled the head of a family to claim 160 acres of land in Kansas for only a small filing fee and a residency requirement of five years (Fertig, 1999, p. 29).

As the Homestead Acts continued to be revised, new land was opened up in North and South Dakota, Iowa, and Nebraska that attracted new groups of immigrants, including Poles, Irish, Czechs or Bohemians, and Austrians. Each adult in the family could claim 160 acres, up to 480 acres per family, on the prairie. For a small filing fee the families could farm the land providing they built a homestead and lived there for a certain number of months a year. Women as well as men filed claims and lived on the land until it was theirs after the residency requirement had been completed (Fertig, 1999, p. 29). Each ethnic group brought its own unique culinary traditions to the melting pot of the Midwest.

Czech. Immigrants from what became Czechoslovakia brought their love of sweet and sour flavors, dumplings of all kinds, dried fruits and mushrooms, and kolache. Wild duck or jackrabbit was marinated in a vinegar and spice mixture, then roasted in the oven. The gravy was thickened with sour cream. Dumplings made from flour, bread crumbs, or potatoes were cooked on top of simmering stews or soups. Dried fruits and mushrooms were plumped in liquid and made into sweet or savory soups. Barley filled out stuffed cabbages or added depth to wild Page 456  |  Top of Article 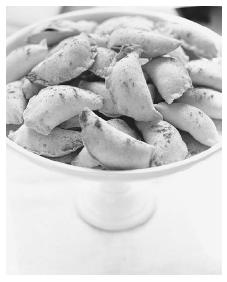 The Midwest is home to numerous ethnic communities. One of the largest is the Polish community in Chicago and around Detroit. Polish foods are available in many parts of the Midwest, and the best known are pirogi. PHOTO BYANDRÉ BARANOWSKI.
mushrooms in a baked dish. Cold weather vegetables like cabbage, carrots, potatoes, and parsnips also feature in Czech cooking. Kolache, tiny individual coffeecakes made of buttery yeast dough and filled with fruit butters or preserves, are a favorite fresh and hot in Nebraska, South Dakota, and Kansas kitchens.

German. The Heartland welcomed Germans from many different culinary traditions, and each group brought a different cooking style. The Volga Germans enjoyed a tradition of bierocks, verenicke, and other dishes similar to those of the Russian Mennonites. The "border people" from Bavaria loved homemade noodles and sweet-sour dishes, such as sweet-sour heart, liver, and tongue. Most of their cuisine was centered around cabbage and pork of all kinds. Smoky flavors combined with sweet and sour flavors, and onions and herbs. Homemade sauerkraut simmered with pork, potato pancakes, tortes, braised cabbage, sausage cooked in beer, honey, and spice cookies entered mainstream American cuisine thanks to German immigrants.

Russian Mennonite. Wheat-farming Russian Mennonites, who brought the first Turkey red winter wheat seeds to Kansas in 1875, are credited with transforming this part of the prairie into the nation's breadbasket (Fertig, 1998, pp. 47–57). Their foodways were influenced by sojourns in the Netherlands, Germany, and the Ukraine. A Protestant sect advocating a simple life and a firm commitment to the ideas of the church, much like the Amish, the Mennonites kept searching for a place where they could work and worship in peace. Fleeing religious persecution for their pacifist views, the Mennonites brought their favorite foodways with them to each new homeland. One specialty, a fruit soup or moos (pronounced "mose"), is thickened with flour. Verenicke, a ravioli-like pasta filled with dry-curd cheese, is served with sour cream ham gravy, jelly, or syrup. Homemade bread is a staple in most households, but the traditional favorite is zwieback, a brioche-type sweet yeast bread often served on Sundays. When sliced and toasted in the oven, it takes on a nutty, delicious flavor and keeps for weeks. Immigrant families often brought baskets of toasted zwieback to last until they reached the prairie.

Swedish. Pure, clean flavors combine with rich, buttery baked goods and creamy, mild tastes to form the constellation of Swedish foods of the Midwest. The flavors and colors of sillsalat, pickled herring, and pickled beets offer a taste counterpoint to the mild flavors of Swedish potato sausage, baked brown beans, and Swedish yellow pea soup. Fresh dill turns up in potato dishes and pickles of all kinds. But the highlight of a meal is always the baked goods: hard and crispy knackebrod with soup, almond-flavored kringler or saffron-flavored Lucia buns (for Saint Lucia Day on 14 December) and tea rings with breakfast, mellow limpa rye bread with dinner. Mellow and milky desserts like ostakaka and rice pudding are often served with a red fruit sauce as much for a color contrast as for a taste complement. Indeed deep red is a favorite punctuation mark in Swedish meals, whether is appears in the spiced gluhwein on special occasions, beet dishes and sillsalat, or lingonberry and red currant sauces for everything from lacy Swedish pancakes to roast goose.

Italian. Italians, mainly from Sicily, were one of the last immigrant groups to arrive in the Midwest, in the early 1900s. Many Italian immigrants became market gardeners or opened restaurants or produce businesses in places Page 457  |  Top of Article like Des Moines, Chicago, St. Louis, Cincinnati, and Kansas City. Varieties of Italian cookies, some made with pine nuts or fig preserves, star in Italian bakeries and festivals throughout the Heartland. Amogio, a marinade of white wine, garlic, and herbs, flavors chicken and beef, which is then rolled in modiga or flavored breadcrumbs and grilled. Zesty tomato sauce tops pasta dishes and baked eggplant.

Barbecue. Traveling up from South America, the barbeque tradition is rooted in the foodways of rain-forest Indians, who smoked meats over green wood to preserve them for later use. Over time this technique spread to the American South and from there to Missouri, where black residents used pit barbeques to smoke lesser and cheaper cuts of meat like spareribs and brisket. In 1916 the Kansas City resident Henry Perry began selling barbequed turkey, duck, pig, and goose, and by 1929 he had three separate barbeque stands. His fame spread, and he taught others, including Charlie Bryant, the secrets of slow smoking. Bryant and his brother Arthur Bryant eventually took over Perry's business, calling it Charlie Bryant's. When Charlie died in 1952, it became Arthur Bryant's, whose barbeque rose to fame when Calvin Trillin extolled it. By the early twenty-first century Kansas City had over one hundred barbeque joints, from the basic shack to the high-style restaurant (Stein and Davis, 1985, pp. 11–20).

The region's agricultural roots are celebrated every year in state fairs held in late summer and early fall. During the 1850s, when the region was predominately agricultural, state fairs were established throughout the Midwest. The first was the Ohio State Fair, held in Cincinnati in 1850. Even though most state economies changed from mainly agricultural to businesses of other kinds, the tradition continued into the twenty-first century. They usually include the butter cow or other object or person sculpted from butter, a traditional attraction that began at the Ohio State Fair in 1903. Concessions offer unique state fair food, such as pork chop dinners in Iowa, barbecued rib dinners in Missouri, fried chicken dinners in Ohio, Indian tacos in Nebraska, and anything you want on a stick, including cheese, bamboo beef, smoked turkey legs, roasted corn, and corn dogs (Fertig, 1999, p. 60).