A prolific and seminal figure in underground literature, Charles Bukowski (1920-1994) is best known for poetry and fiction in which he caustically indicts bourgeois society while celebrating the desperate lives of alcoholics, prostitutes, decadent writers, and other disreputable characters in and around Los Angeles.

Born in 1920 in Andernach, Germany, Bukowski emigrated to Los Angeles in 1922 with his father, an American soldier, and his German mother. As an adolescent he was distanced from his peers by a disfiguring case of acne and he resisted the attempts of his abusive and uncompromising father to instill in him the American ideals of hard work and patriotism. Following high school, Bukowski attended Los Angeles City College from 1939 to 1941 but left without obtaining a degree. He began writing hundreds of unsuccessful short stories while drifting from city to city in a succession of low-paying jobs—including work as a mailman, post office clerk, Red Cross orderly, and laborer in a slaughterhouse and a dog biscuit factory. Although he published his first short story, "Aftermath of a Lengthy Rejection Slip," in a 1944 issue of Story magazine at the age of twenty-four, Bukowski virtually stopped writing for a decade, choosing instead to live as an alcoholic on skid row. After being hospitalized with a bleeding ulcer in 1955, Bukowski began writing poetry and resolved to drink less heavily. During this period he discovered the literature of Upton Sinclair, Sinclair Lewis, and especially Ernest Hemingway, which offered him an alternative to alcoholism and aided in the development of his own concise, realistic prose style.

Bukowski published his first collection of poetry, Flower, Fist, and Bestial Wail, in 1960. He quickly produced a series of poetry chapbooks, including Longshot Poems for Broke Players and Run with the Hunted, featuring surreal verse that expresses sentimentality for the West's Romantic past as well as disgust for the vacuousness of modern culture. While these poems garnered him a small but loyal following over the next decade, Bukowski's work in the short story genre first gained him a wide readership and established his literary reputation. Beginning in 1967, when the antiwar and counterculture movements flourished Page 114  |  Top of Article 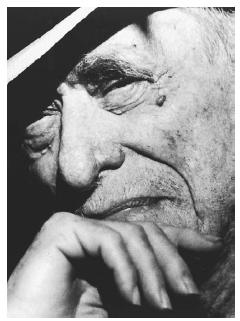 in the United States, Bukowski began contributing a weekly column, "Notes of a Dirty Old Man," to the Los Angeles alternative newspaper Open City, and later, to the Los Angeles Free Press. Combining journalism, fiction, and philosophy in a rambling, disjointed style, these pieces established his philosophy and defiant, anarchic persona. Perceiving American culture as hypocritical, Bukowski censured American films and television as escapist wish-fulfillment, morality as organized hypocrisy, patriotism as conformism, and academic writers, scholars, and intellectuals as self-righteous charlatans who attack American society while reaping its benefits.

Bukowski began his career writing poetry critical of American bourgeois institutions while disclaiming the title of writer: "To say I'm a poet puts me in the company of versifiers, neontasters, fools, clods, and skoundrels [sic] masquerading as wise men." In Longshot Poems for Broke Players, Bukowski introduces his characteristic outsider protagonist: the unstudied, self-exiled poet who provokes public enmity through his apparent rudeness to writers and other socialites, and maintains his freedom and uniqueness as a writer by rejecting the public literary world. In "Letter from the North," for example, the narrator responds to a despondent writer's request for sympathy with the question: "write you? about what my friend? / I'm only interested in poetry." In ensuing collections such as It Catches My Heart in Its Hands and Crucifix in a Deathhand, Bukowski's narrator retains his hostility to the outer world while revealing a paradoxical inner gentleness. In "Fuzz," the unsteady protagonist unexpectedly empathizes with a group of children who are taunting him: "when I go into the liquor store / they whirl around outside / like bees / shut out from their nest. / I buy a fifth of cheap / whiskey / and/3/ candy bars." Much of Bukowski's subsequent poetry, collected in such volumes as Poems Written before Jumping out of an 8-story Window, The Days Run Away Like Wild Horses over the Hills, and Fire Station, deals in concrete, realistic terms with acts of rape, sodomy, deceit, and violence, particularly focusing on sexual relationships characterized by physical and emotional abuse in which women seek to enslave men through marriage and men attempt to avoid such enslavement through the equally imprisoning pursuit of wealth and material pleasures.

Many of the events described in Bukowski's poetry recur in the autobiographical short stories and novels he began writing in the 1970s. While his earlier stories, many of which were published in men's pornographic magazines, generally employ stock formulas, Bukowski's later fiction, published in Erections, Ejaculations, Exhibitions, and General Tales of Ordinary Madness and South of No North: Stories of the Buried Life, is more sophisticated, philosophical, and pointedly critical of American society. Many of these stories focus on sexual relationships that feminist and other critics have faulted as misogynistic. Other critics, however, believe these works expose the short-sightedness, pettiness, and spiritual bankruptcy of a dysfunctional society.

During the 1970s Bukowski began writing semiautobiographical novels featuring the first-person narrator Henry ("Hank") Chinaski, a hard-boiled, alcoholic survivor who trades a mediocre, normal life for a position that allows for unromanticized self-awareness in the socially unrestricted environment of the ghetto. Bukowski's first novel, Post Office, contrasts the mindlessness and monotony of Chinaski's work life as an employee of the United States Post Office with the varying degradation and vitality of his unconventional personal life. Factotum chronicles Chinaski's experiences as a young man before the events related in Post Office, while Ham on Rye recounts his adolescent years and conflicts with his tyrannical father. Women details Chinaski's sexual exploits after the events chronicled in Post Office and his eventual desire for a monogamous relationship. Chinaski is also a central character in Bukowski's novel Barfly, which he adapted into a screenplay for the film directed by Barbet Schroeder and starring Mickey Rourke and Faye Dunaway. Bukowski's encounters with California's film industry are also detailed in Hollywood, another novel featuring Chinaski. Bukowski died of leukemia in Los Angeles in 1994