Mary Wollstonecraft Shelley (1797-1851) is best known for her novel Frankenstein; or, The Modern Prometheus (1818), which has transcended the Gothic and horror genres and is now recognized as a work of philosophical and psychological resonance. In addition to Frankenstein, Shelley's literary works include several novels that were mildly successful in their time but are little known today and an edition of poetry by her husband, the Romantic poet Percy Bysshe Shelley, which she issued with notes that are now regarded as indispensable. Her reputation rests, however, on what she once called her "hideous progeny," Frankenstein.

Shelley's personal life has sometimes overshadowed her literary work. She was the daughter of Mary Wollstonecraft, the early feminist and author of A Vindication of the Rights of Woman, and William Godwin, the political philosopher and novelist. Her parents' wedding, which occurred when Wollstonecraft was five months pregnant with Mary, was the marriage of two of the day's most noted freethinkers. While they both objected to the institution of matrimony, they agreed to marry to ensure their child's legitimacy. Ten days after Mary's birth, Wollstonecraft died from complications, leaving Godwin, an undemonstrative and self-absorbed intellectual, to care for both Mary and Fanny Imlay, Wollstonecraft's daughter from 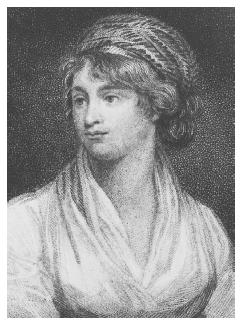 an earlier liaison. Mary's home life improved little with the arrival four years later of a stepmother and her two children. The new Mrs. Godwin, whom contemporaries described as petty and disagreeable, favored her own offspring over the daughters of the celebrated Wollstonecraft, and Mary was often solitary and unhappy. She was not formally educated, but absorbed the intellectual atmosphere created by her father and such visitors as Samuel Taylor Coleridge. She read a wide variety of books, notably those of her mother, whom she idolized. Young Mary's favorite retreat was Wollstonecraft's grave in the St. Pancras churchyard, where she went to read and write and eventually to meet her lover, Percy Shelley.

An admirer of Godwin, Percy Shelley visited the author's home and briefly met Mary when she was fourteen, but their attraction did not take hold until a subsequent meeting two years later. Shelley, twenty-two, was married, and his wife was expecting their second child, but he and Mary, like Godwin and Wollstonecraft, believed that ties of the heart superseded legal ones. In July 1814, one month before her seventeenth birthday, Mary eloped with Percy to the Continent, where, apart from two interludes in England, they spent the next few years traveling in Switzerland, Germany, and Italy. These years were characterized by financial difficulty and personal tragedy. Percy's father, Sir Timothy Shelley, a wealthy baronet, cut off his son's substantial allowance after his elopement. In 1816, Mary's half-sister Fanny committed suicide; just weeks later, Percy's wife, Harriet, drowned herself. Mary and Percy were married in London, in part because they hoped to gain custody Page 175  |  Top of Article of his two children by Harriet, but custody was denied. Three of their own children died in infancy, and Mary fell into a deep depression that was barely dispelled by the birth in 1819 of Percy Florence, her only surviving child. The Shelleys' marriage suffered, too, in the wake of their children's deaths, and Percy formed romantic attachments to other women. Despite these trying circumstances, both Mary and Percy maintained a schedule of rigorous study— including classical and European literature, Greek, Latin, and Italian language, music and art—and ambitious writing; during this period Mary completed Frankenstein and another novel, Valperga (1823). The two also enjoyed a coterie of stimulating friends, notably Lord Byron and Leigh Hunt. The Shelleys were settled near Lenci, Italy, on the Gulf of Spezzia in 1822 when Percy drowned during a storm while sailing to meet Leigh and Marianne Hunt. After one mournful year in Italy, Mary returned permanently to England with her son.

Shelley's life after Percy's death was marked by melancholy and hardship as she struggled to support herself and her child. Sir Timothy Shelley offered her a meager stipend, but ordered that she keep the Shelley name out of print; thus, all her works were published anonymously. In addition to producing four novels in the years after Percy's death, Mary contributed a series of biographical and critical sketches to Chamber's Cabinet Cyclopedia, as well as occasional short stories, which she considered potboilers, to the literary annuals of the day. The Shelleys' financial situation improved when Sir Timothy increased Percy Florence's allowance with his coming of age in 1840, which enabled mother and son to travel in Italy and Germany; their journeys are recounted in Rambles in Germany and Italy in 1840, 1842, and 1843 (1844). Too ill in her last few years to complete her most cherished project, a biography of her husband, Shelley died at age fifty-four.

Although Frankenstein has consistently dominated critical discussions of Shelley's oeuvre, she also composed several other novels in addition to critical and biographical writings. Her five later novels attracted little notice, and critics generally agree that they share the faults of verbosity and awkward plotting. After Frankenstein, The Last Man (1826) is her best-known work. This novel, in which Shelley describes the destruction of the human race in the twenty-first century, is noted as an inventive depiction of the future and an early prototype of science fiction. Valperga and The Fortunes of Perkin Warbeck (1830) are historical novels that have received scant attention from literary critics, while Lodore (1835) and Falkner (1837), thought by many to be autobiographical, are often examined for clues to the lives of the Shelleys and their circle. Shelley's stories were collected and published posthumously, as was Mathilda, a novella that appeared for the first time in the 1950s. The story of a father and daughter's incestuous attraction, it has been viewed as a fictional treatment—or distortion—of Shelley's relationship with Godwin. The posthumously published verse dramas, Proserpine and Midas (1922), were written to complement one of Percy Shelley's works and have garnered mild praise for their poetry. Critics also admire Shelley's non-fiction: the readable, though now dated, travel volumes, the essays for Chamber's Cabinet Cyclopedia, which are considered vigorous and erudite, and her illuminating notes on her husband's poetry.

Since Shelley's death, critics have devoted nearly all of their attention to Frankenstein. Early critics, generally with some dismay, usually relegated the novel to the Gothic genre then practiced by such popular authors as Ann Radcliffe and Matthew Gregory "Monk" Lewis. While most early Victorian reviewers reviled what they considered the sensationalist and gruesome elements in Frankenstein, many praised the anonymous author's imagination and powers of description. In the later nineteenth century and throughout Frankenstein criticism, commentators have focused on Prometheanism in the novel, an aspect that Shelley herself highlighted in the book's subtitle. This line of inquiry, which continues to engage critics, likens Dr. Frankenstein to the Greek mythic figure who wreaks his own destruction through abuse of power. Percy Shelley treated the same mythic-philosophic theme in his poetry, most notably in Prometheus Unbound, and critics have searched for his influence on Frankenstein, particularly in the expression of Romantic ideals and attitudes. Scholars have also debated the value of the additional narratives that he encouraged her to write. While some have praised the novel's resulting three-part structure, others have argued that these additions detract from and merely pad the story, although most have valued the other-worldly Arctic scenes. Commentators have also frequently noted the influence of Shelley's father, tracing strains of Godwin's humanitarian social views; in addition, some critics have found direct thematic links to his fiction, particularly to his novel, Caleb Williams. Other literary allusions often noted in Frankenstein include those to John Milton's Paradise Lost, the source of the book's epigraph, as well as Johann Wolfgang von Goethe's Faustand Coleridge's "The Rime of the Ancient Mariner."

Frankenstein criticism has proliferated since the 1950s, encompassing a wide variety of themes and approaches. The monster, who is often the focus of commentary, has been interpreted as representing issues ranging from the alienation of modern humanity to the repression of women. Many commentators have viewed the monster as Dr. Frankenstein's double, an example of the doppelganger archetype. In a similar vein, critics have discussed Dr. Frankenstein and the monster as embodying Sigmund Freud's theory of id and ego. Students of the Gothic, supernatural horror, and science fiction novel have adopted Frankenstein as a venerable forebear and have approached it from a historical slant. Alternately, Shelley's life has served as a starting point for those who perceive in the novel expressions of the author's feelings toward her parents, husband, children, and friends. Recent feminist critics, in particular, have found Shelley and Frankenstein a rich source for study, describing it, for example, as a manifestation of the author's ambivalent feelings toward motherhood.

Leigh Hunt once characterized Shelley as "fourfamed—for her parents, her lord / And the poor lone impossible monster abhorr'd." Today, she has emerged from the shadow of her parents and husband as an artist in her own Page 176  |  Top of Article right. The volume and variety of Frankenstein criticism attests to the endurance of her vision.

Gerson, Noel B., Daughter of Earth and Water: A Biography of Mary Wollstonecraft Shelley, Morrow, 1973.

Gilbert, Sandra, and Susan Gubar, The Madwoman in the Attic, Yale University Press, 1979.