At the most basic level, organic food is grown or raised without the use of synthetic chemicals. In the production of vegetables and fruits, no synthetic pesticides or fertilizers may be used, and no hormones or antibioticsPage 1367  |  Top of Article 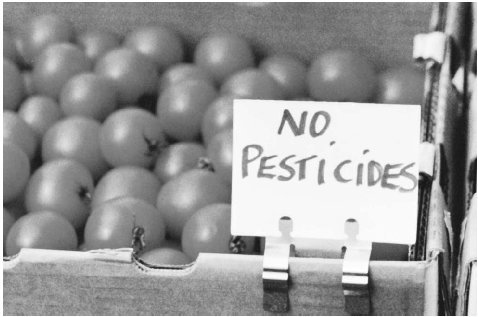 Fresh tomatoes with a "No Pesticides" sign. Organic vegetables are grown without the chemical herbicides and pesticides used in conventional agriculture. (Nancy R. Cohen/Getty Images.) may be used in the rearing of livestock or poultry. The concept of organic food, however, remains fuzzy. Beyond restricting the use of synthetic chemicals, other issues sometimes incorporated into the idea of organic food include: no sewage-sludge fertilizers, no food irradiation, no genetically modified organisms, humane conditions for livestock and poultry, sustainable land use practices, and just treatment of workers in the food production process.

Until the twentieth century, all human food was organic. At the dawn of World War II, the few pesticides in use were derived from plants (for example, nicotine, rotenone, pyrethrum) or minerals (for example, arsenic and sulfur compounds). Paul Müller's 1939 discovery of the insecticidal properties of DDT, in conjunction with military needs to control infectious disease, propelled the chemical industry to full-scale production, which continued after the war as DDT and other pesticides were put to agricultural use. Pesticides and chemical fertilizers, along with new crop hybrids, farm machinery and irrigation techniques, enabled industrial agriculture, which aims to increase agricultural yield while decreasing the costs of production in order to maximize both food production and profits. Following World War II, the United States exported industrial agriculture across the globe for humanitarian and economic purposes. The green revolution began in the 1940s according to Norman Norlaug, Nobel laureate and widely recognized father of the green revolution. New hybrid crops were only one part of the green revolution, new agricultural techniques, including the heavy use of synthetic fertilizers, pesticides, irrigation techniques, and new farm equipment played a significant role in both the green revolution and the viability of the new plant hybrids.

Meanwhile, Lady Eve Balfour of England investigated, practiced, and promoted organic farming starting in 1938. She published The Living Soil in 1943, which led to the 1946 formation of the Soil Association, still the United Kingdom's leading organic foods organization. In the United States J. I. Rodale popularized organic gardening through the soil and health foundation, founded in 1947. He created several publications including Organic Farming and Gardening (est. 1942) and Prevention Magazine (est. 1950). His son, Robert, expanded this work by establishing the Rodale Institute and Rodale Press to promote the healthy land/healthyPage 1368  |  Top of Article human connection. It was not until the environmental movement began in the 1960s, however, that organic foods flourished. In 1962, Rachel Carson's Silent Spring called attention to the public health and environmental consequences of industrial agriculture and unchecked pesticide use. The resulting concern over public health and the environment created a demand for organic food throughout the industrialized world.

In 1990 the United States Congress passed the U.S. Organic Foods Production Act, mandating the U.S. department of agriculture "(1) to establish national standards governing the marketing of ... organically produced products; (2) to assure consumers that organically produced products meet a consistent standard; and (3) to facilitate interstate commerce in fresh and processed food that is organically produced." But the debate over the development of organic standards between the initial 1994 recommendations and the final rules implemented in October 2002, and the global debate more generally, exposed significant ethical and scientific disagreements.

Organizations such as the Soil Association (est. 1946), Organic Trade Association (est. 1985), and the Organic Consumers Association (est. 1998) claim that organic foods promote a healthy, safe, and sustainable system of food production. But critics such as the Hudson Institute Center for Global Food issues and the American Council on Science and Health point out that no scientific evidence exists that organic foods are significantly more nutritious, safer, or tastier than conventionally grown foods. These critics have suggested that government promotion of organic foods undermines confidence in conventionally grown foods to the detriment of the poorest members of society and perpetuates a kind of fraud whereby organic food producers charge extra for products with no significant benefit.

Arguments for industrial agriculture rest on efficiency and the elimination of hunger, while arguments for organic food emphasize environmental and sometimes social sustainability. Some people accuse advocates of organic agriculture of elitism in prioritizing the environment over the needs of the poor. At the same time, organic advocates accuse industrial agriculture of prioritizing profits over environmentally and socially sustainable agriculture. Issues over how to define organic standards, how to enforce standards in an international food market, the appropriate burden of proof for the organic foods industry, and the relative importance of feeding the poor versus creating a sustainable system of food production pervade the organic debate.

Underlying this debate is the critical issue of global population growth. The Green Revolution succeeded in the sense that it prevented the starvation catastrophe predicted by Thomas Robert Malthus (1766–1834) and Paul R. Ehrlich (b. 1932). But with rapid increases in agricultural yield diminishing, one must explicitly consider the roles of organic and conventional food production in a world with a still burgeoning population.

Balfour, Eva B. (1943). The Living Soil and the Haughley Experiment. London: Faber & Faber.