Ford Motor Company is the second-largest automaker in the United States, the fifth-largest in the world, and the manufacturer of the F-Series pickup truck, an extremely popular brand in the United States since 1981. Headquartered in Dearborn, Michigan, Ford has 77 office and plant locations in 21 countries. The company markets vehicles under the brand names of Ford and Lincoln and owns a small interest in Japanese automaker Mazda Motor Corporation. Ford Credit, one of the company's subsidiaries, is a leading provider of automotive financing. Along with General Motors and Chrysler, Ford is a

Henry Ford (1863–1947), founder of the Ford Motor Company and one of the great industrialists of the twentieth century, was born into a Dearborn, Michigan, farming family on July 30, 1863. At age 16 he went to nearby Detroit, where he worked as an apprentice at a machine shop. When he was 28 Ford took a job with Thomas Edison's (1847–1931) Detroit Illuminating Company, where he became chief engineer. In his spare time Ford began to build his first car, the Quadricycle, which resembled two bicycles positioned side by side with a barely visible engine frame. He founded the Detroit Automobile Company in 1899 and built an improved Quadricycle using a four-cylinder, 36-horsepower racing engine. In 1901 his car beat what was then the world's fastest automobile in a race held in Grosse Pointe, Michigan.

The publicity he received for this victory allowed Ford to launch his own car company, the Ford Motor Car Company, in 1903. By 1908 he had built the famous Model T, a car that was affordable to the middle class due in part to the efficiency of his signature assembly-line manufacturing technique. Ford shocked the industrial world in 1914 by paying his workers the very high wage of $5 a day in exchange for maintaining regular attendance at work and a serious and sober private life, yet he ultimately attracted criticism for treating workers like machines. He also drew criticism for publishing his anti-Semitic beliefs in a series of unsigned newspaper articles in the 1920s.

Despite such controversial views, Ford was an active philanthropist throughout his life. He built a hospital for his employees in Detroit and in 1936 established the Ford Foundation for the purposes of “advancing human welfare.” Since its founding, the Ford Foundation has issued more than $8 billion in grants worldwide. Ford died at his estate, Fairlane, in Dearborn, Michigan, in 1947 at the age of 84.

member of the “Big Three,” a group of the country's largest car companies.

Henry Ford (1863–1947) founded the Ford Motor Company in 1903, launching it from a small converted wagon factory in Detroit. Over the next five years Ford engineers feverishly developed 19 different models: some models succeeded, others failed, and some never left the plant. In 1908 Ford designed an inexpensive and reliable car that could be mass produced: the Model T Ford. The Model T came to symbolize low-cost, durable transportation. As demand climbed, Ford invented the world's first moving automobile assembly line in 1913. Henry Ford believed that automobile production would become more efficient if all employees were assigned one place to work, where they could focus on a specific task to accomplish. Within 12 months of the invention, Ford workers had reduced the time during which a chassis could be assembled from 12 hours and eight minutes to one hour and 33 minutes. Ford manufactured 308,162 cars in 1914, more than all 299 other car manufacturers combined. The Model T's success provided Ford with revenue to purchase luxury carmaker Lincoln Motor Company in 1922.

Consumer interests gradually shifted in the 1920s. Competitors rolled out more powerful and stylish cars. To stem dwindling profits, Ford discontinued production of the Model T in 1927 and closed plants around the country so the company could retool. When the company opened its doors six months later, it unveiled a vastly improved Model A, which sold more than 4.5 million units in four years. In the 1930s and 1940s Ford's market share slipped behind those of GM and Chrysler. After World War II (1939–45), most of its war-related contracts with the government terminated, and the company suffered losses of $10 million per month.

In 1947 founder Henry Ford died, four years after the premature death of his 49-year-old son Edsel (1893–1943), who had succeeded his father as the company's president in 1918. Henry Ford II (1917–87), Edsel's eldest son, took over as president in 1945. For the next three decades he helped modernize Ford and return it to profitability. In 1955 the automaker introduced the Thunderbird, a sleek roadster that sold more than 16,000 units in its first year. The following year the company went public in the largest stock sale ever at the time, selling 10.2 million shares. In 1956 Ford created an aerospace division that was followed two years later by its entrance into the heavy and extra-heavy truck market. In 1963 Ford debuted the highly successful Mustang sports coupe, a popular muscle car.

During the 1960s Ford's management fought bitterly over the company's direction, changing executives throughout the decade. In the 1970s Ford was named as a defendant in a series of wrongful death lawsuits stemming from numerous incidents that involved the explosion of gas tanks on its subcompact Bobcat and Pinto during rear-end collisions. The OPEC oil embargo of the 1970s also made Ford's bigger, gas-guzzling vehicles a liability, and many U.S. citizens started turning to smaller, more fuel-efficient Japanese cars. 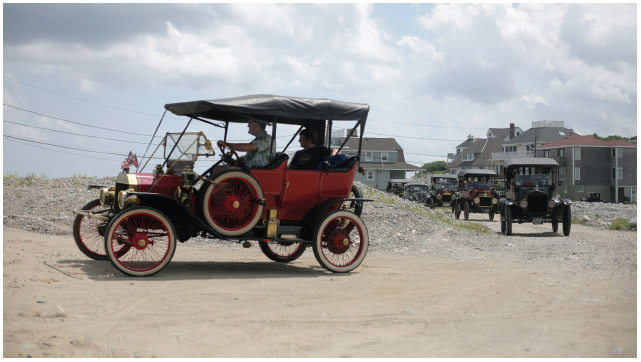 The Model T, manufactured from 1908 to 1927, was an immense success for Ford Motor Company. In this photo a group of Model T collectors gather together in 2012. TAMIR KALIFA FOR THE BOSTON GLOBE/GETTY IMAGE

After losing $3.2 billion from 1980 to 1982, the company downsized by reducing one-third of its workforce and closing 15 plants and diversified by purchasing a tractor company and a finance and leasing corporation. In 1985 Ford introduced the Taurus, an affordable midsize vehicle that, by 1987, was outselling every other car in the United States. Ford reported record profits in the late 1980s as the Ford F-Series pickup truck and subcompact Escort gained popularity. As car sales across the United States dropped off in the early 1990s, Ford lost billions of dollars. Its financial services sector, however, performed well.

Ford continued restructuring in the 1990s, gradually getting out of the heavy-truck business and consolidating its operations in North America and Europe in order to better compete with Japanese car companies such as Honda and Toyota. CEO Jacques Nasser (1947–) brought new vision to the company in 1998 by cutting waste, espousing a customer-based corporate philosophy, and working to attract young people to the Ford brand. During this time the company also announced plans to make its vehicles more environmentally friendly. In 1999 Ford teamed with DaimlerChrysler AG and the state of California to test zero-emission cars powered by fuel-cell technology. The carmaker also announced a plan to purchase auto junkyards and recycle undamaged car parts to mechanics. These announcements, however, were tempered by its goal to build the biggest SUV to date in 2000.

The early twenty-first century was a difficult period for Ford. In 2000 and 2001 it was forced to recall billions of Bridgestone's Firestone tires that were tied to 271 deaths in Ford Explorer rollover accidents, costing the company around $2 billion before reparations. Although investigators determined that the tires themselves were at fault, Ford's reputation took a hit. By 2005 the company reported a decreased market share and announced that it would slash U.S. jobs by 29 percent and close some plants. The company unveiled a new “Way Forward” campaign headed by CEO Alan Mulally (1945–), who continued the restructuring and downsizing of Ford by selling major assets such as Volvo.

Because Ford had already scaled back and sold key assets for capital, the recession that began in late 2007 did not affect the company as dramatically as it did GM and Chrysler. Like the other Big Three automakers, Ford experienced a major drop-off in sales in 2008; however, unlike GM and Chrysler, it was able to weather the storm without accepting bailout money from the U.S. Treasury. By the end of 2009 Ford had jumped in U.S. market share and reported a profit. The company hired around 7,000 new workers in 2011, reported record-breaking net profits of $5.7 billion in 2012 and $7.2 billion in 2013, and continued to expand its presence in China, a flourishing auto market.