Children at Work and at School

Children at Work and at School 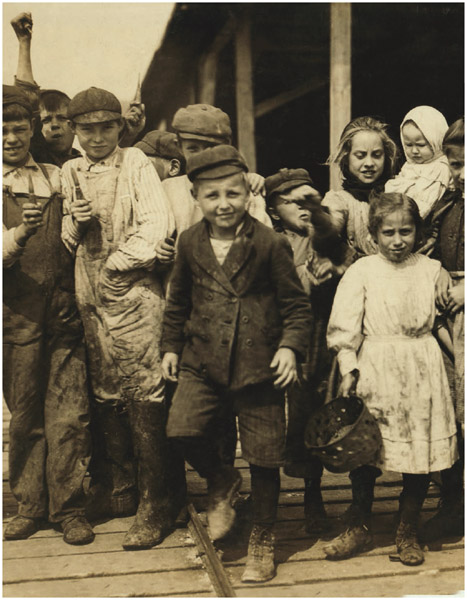 Children as young as five worked in the seafood industry, shucking oysters and peeling shrimp.

As factories grew, owners needed more workers. They looked to children. Children could be paid less than adults. Their small size also let them do certain jobs that were too delicate for adults. At the time, there were no successful federal laws that banned child labor in the United States.

Immigrants from Germany, Ireland, and England poured into the United States during the Industrial Revolution. They sought a better life. Most thought the United States would provide greater opportunities than their home countries. But employers did not treat their immigrant workers fairly. Employers often paid immigrants lower wages than other workers. Immigrants also faced discrimination and were treated poorly by Americans. Many settled in communities made up of others from their homelands. The immigrants of the Industrial Revolution helped make the United States the diverse nation it is today.

Girls in the Workforce

The most common industrial employment for girls between ages seven and fourteen was the textile mill. Girls could earn between 80 cents and $1.40 per week. The money helped their families buy food and other necessities.

Girls often lived in a boardinghouse, where a matron was in charge. Five or six girls shared a bedroom. Two or three girls might share one bed, and many girls shared one bathroom. Workdays were

Girls in textile mills worked with the windows closed even in summer to provide ideal conditions for making thread.

12 hours long, six days a week. Many different jobs were available, depending on the size of the girl.

Young girls were more common than young boys in the textile mills. Their small size made it easy for them to change spinners or bobbins, which were used to gather new thread. They replaced spindles and tied broken threads. Children could slip in between machines to fix small parts with their small fingers. The jobs were dangerous. Most machines lacked safety features to prevent fingers from getting caught in their mechanisms. Breathing in lint from the cotton all day could cause a fatal disease called brown lung.

Breaker boys breathed in coal dust on their long shifts, which harmed their lungs.

Boys in the Workforce

While girls were more likely to find work in textile mills, many boys found other jobs that were just as difficult. In Pennsylvania and Virginia, boys commonly worked in coal mines. The mines provided coal for steamboats, railroads, and factories.

Boys working in coal mines did a number of tasks. Boys as young as seven worked as “breaker boys.” They crouched while breaking coal from rock for up to 12 hours a day. Older boys took care of the mules that Page 29  |  Top of Articlehauled the coal. Others operated ventilation doors that kept toxic gases from building up in the mines. Explosions, poisonous gas leaks, and other accidents were common. Lead and dust from coal and rock were also dangerous. Many children from poor families worked up to 90 hours a week to help support their families.

Congress finally outlawed most child labor during the 1930s. The new laws limited the number of hours and types of jobs young children could have. The laws allowed children to focus on school instead of work.

Some adults believed all children should have the right to attend school and should not have to work. Many people believed children should not work in factories. One of the first public schools opened in Saint Louis, Missouri, in 1808. Many one-room schoolhouses followed. Students of all ages traveled by foot or in horse-drawn buggies to learn in one of the new schoolhouses. The youngest students 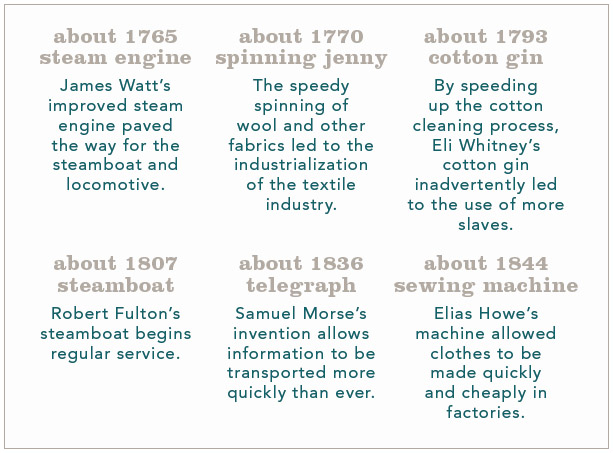 received their lessons in the morning before they became too tired. Students also helped care for their schoolhouse. They carried firewood to keep it warm in winter, cleaned it as needed, and helped repair the structure as it aged.

STRAIGHT TO THE SOURCE

After their long hours in the mill, some girls read magazines and books kept in the boardinghouses. A group of inspired women created The Lowell Offering, a 16-page magazine with original works written by the factory girls in Lowell. A factory girl wrote about the hardships of life in an excerpt from the article “The Spirit of Discontent” in an 1841 Offering:

I am going home, where I shall not be obliged to rise so early in the morning, nor be dragged about by the factory bell, nor confined in a close noisy room from morning to night. I shall not stay here.… Up before day, at the clang of the bell, and out of the mill by the clang of the bell—into the mill, and at work in obedience to that ding-dong of a bell—just as though we were so many living machines.

Take a close look at this excerpt. What is the writer's main point about life in a factory? Pick out two details she uses to make this point. What can you tell about the quality of life for factory workers based on this excerpt?