From Country to City

From Country to City 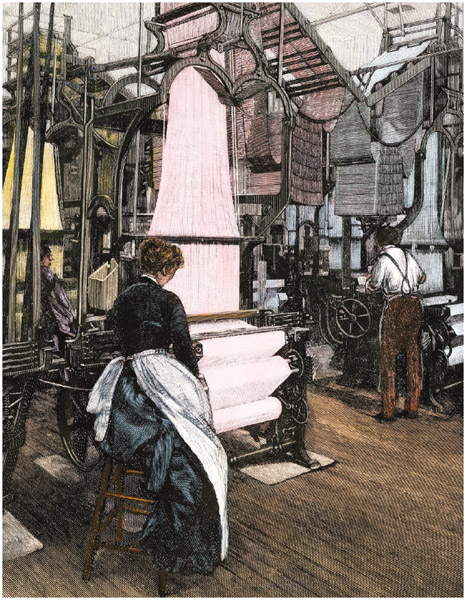 Women were in demand as workers in textile factories.

The Industrial Revolution changed how people lived. Now men and women could take wage-earning jobs in the growing factories.

Women were still the primary caregivers for their children. Though they no longer needed to make as much clothing for their families, they did the washing and mending. Women still cooked and cleaned the home. Many women helped support their families

Factory owners could make more money if they paid their workers low wages and did not invest in safety measures. To protect themselves, workers began uniting to form organized groups called unions that fought for better wages and safer living conditions. The formation of such unions was called the labor movement. Unions protested together to let factory owners know they were being unfair. Unions would also go on strike, which meant their members refused to work until factory owners met their demands.

by working in factories. These women often relied on older family members, neighbors, or even older children to care for the younger ones while they were at work.

The Growth of Cities

Before factory jobs drew them to the cities, many more people lived in the country and farmed. One major city, Chicago, had 300,000 inhabitants in 1870. By 1890 there were more than 1 million. Most warehouses, factories, and docks were in the center of the cities. By the late 1800s, streetcars, railroads, and 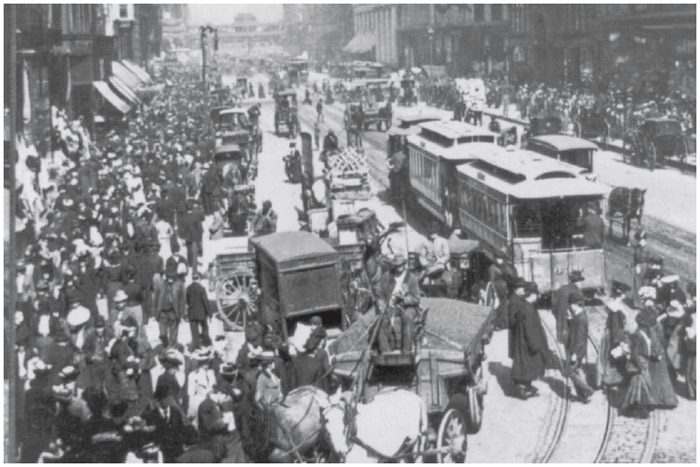 Cities such as Chicago boomed in the late 1800s and early 1900s as workers moved in to take up new industrial jobs.

trolleys enabled cities to expand because people did not have to live within walking distance of their jobs.

Most people chose to live near those who shared their culture and financial status. Immigrants sought out others from their home countries to live with. They ate food and spoke languages that reminded them of home.

During the Industrial Revolution the mentally ill often lived in awful conditions. Sometimes boys, girls, and adults with mental disabilities were placed in prisons with violent criminals. Others were sent to hospitals known as asylums. The mentally ill were put into cribs or strapped to beds or chairs. Most of these people lacked heat and access to a bathroom. Sometimes they were beaten. In 1841 a reformer named Dorothea Dix witnessed the awful conditions in the hospitals. She convinced local and federal governments to build new hospitals and change how they were run.

The working poor, those who were employed but still fell below the poverty line, included many new immigrants. These workers filled the cities and worked many of the new jobs created by the Industrial Revolution. They lived in small apartments near the factories in which they worked. Landlords made money by renting to the many families that moved to the city for jobs.

Government services could not keep up with the quick growth of the cities. Clean water, Page 37  |  Top of Articlegarbage collection, and sewage systems were not sufficient, contributing to poor living conditions. The biggest problem with the cramped living spaces and poor sanitation systems was the outbreak of illnesses, such as cholera, in the cities. This caused illness and even death throughout the late 1800s.

This chapter discusses the changing roles of men and women during the Industrial Revolution. What is the main point of this chapter? What key evidence supports this point? Go to the article on the Industrial Revolution at the website below. Find a quote from the website that supports the chapter's main point. Does the quote support an existing piece of evidence in the chapter? Or does it add a new one?

Women and the Early Industrial Revolution in the United States
www.mycorelibrary.com/industrial-revolution