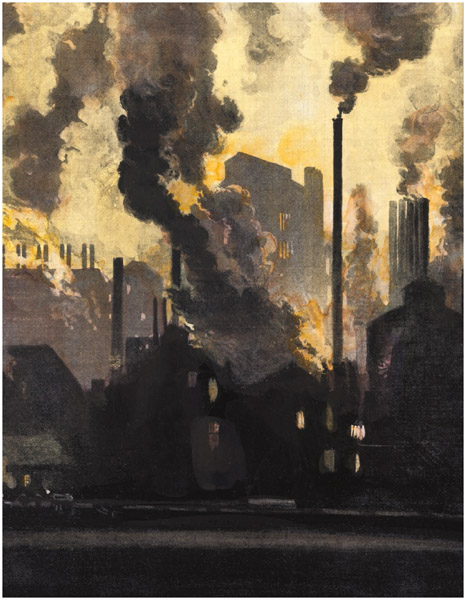 Smog and soot were dangerous by-products of many factories during the Industrial Revolution.

The Industrial Revolution brought many positive changes to the United States. Goods became cheaper. Technological advances helped doctors save more lives. But the Industrial Revolution had many problems. Pollution was a big issue. Coal was necessary for transportation, but the negative side effects included soot and smog. Breathing coal waste could cause serious health problems.

Upton Sinclair exposed the terrible work conditions in Chicago's stockyards, where animals were slaughtered for food, in his novel The Jungle published in 1906. The workers were exposed to disease, harmful chemicals, and dangerous machinery. The novel was an example of “muckraking,” a type of writing that exposed the downsides of the new industrial world. Sinclair wrote about the poor conditions immigrant workers lived and worked in. He also reported the unsanitary conditions in which meat was processed in the stockyards. The novel helped bring about the passage of food-inspection laws that helped keep food safe to eat.

The Industrial Revolution brought greater understanding of how diseases spread. Doctors learned that washing their hands before surgery kept patients from dying. Others discovered that polluted water spread disease. New rules and advances in sewage technology helped prevent the spread of disease.

The United States completely transformed Page 41  |  Top of Articlefrom a nation of farmers to one of factories in less than a century. Manufacturing, transportation, and communication technology were all transformed during the Industrial Revolution. The inventions of the early and mid-1800s created a need for more production as the quality of life improved for Americans. The cities swelled as the countryside emptied. For most Americans, life had changed forever.

Industry and the Civil War

The Civil War was fought between the Northern and Southern states within America from 1861 to 1865, during the Industrial Revolution. Most of the factories and industries were located in the North. Soldiers in the North could travel to battle by train. Machines used in farming helped families in the North keep up with production while the men were away in battle. Factories actually grew and improved to produce weapons, uniforms, and tools for the war effort. The North's advantage in factories and industries helped it win the Civil War.