Signed by President Theodore Roosevelt on June 30, 1906, the Pure Food and Drug Act prohibited the manufacture, sale, or transportation of any adulterated, misbranded, poisonous, or deleterious food, drug, medicine, or liquor. Violations of the act were misdemeanor offenses resulting in fines not to exceed $500, or one year's imprisonment, at the discretion of the court. Along with its companion Meat Inspection Act, the Pure Food and Drug Act was the genesis of the complex regulatory system now administered by the U.S. Food and Drug Administration. 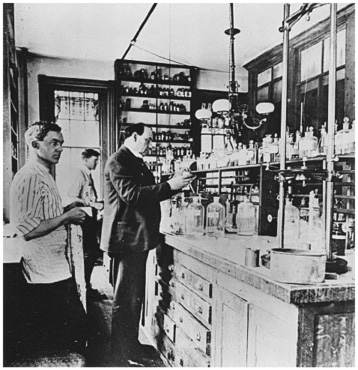 One of the first popular products to come afoul of the Pure Food and Drug Act (PFDA) of 1906 was none other than America's favorite soft drink. In 1909, Dr. Harvey W. Wiley, chief of the Bureau of Chemistry of the U.S. Department of Agriculture, brought suit against the Coca-Cola Company for being “dope peddlers.” The company, he maintained, was in violation of the PFDA because its product contained “no coca and very little cola.” Although the suit was settled in favor of the soft drink company in 1918, it did force Coca-Cola to alter its formula and launch an extensive advertising campaign to convince consumers that the drink was not only “delicious” and “refreshing,” but also “pure and wholesome.”

Like most soft drinks, Coke was the result of a failed experiment—in this case, by druggists attempting to create a medicinal product by mixing ice, carbonated water, and sweetened syrups. Coca-Cola was first produced by a pharmacist named John Pemberton, sometime between 1880 and 1886, in an effort to find a cure for headaches. In the latter year, a pharmacist named Willis E. Venable began serving the concoction at his soda fountain in Atlanta, calling it Coca-Cola Syrup and Extract.

In 1888, a wholesale druggist named Asa Candler assumed control of production and began shipping and advertising the drink across the United States. By the time Candler retired from the company in 1916, his net worth was more than $50 million.

During that time, Coca-Cola transformed itself from a patent medicine to a “soft drink.” In defending itself against the government's suit, the company claimed that the drink contained only “pure water sterilized by boiling,” sugar, flavoring extracts, caramel, caffeine, and citric and phosphoric acids. It insisted that the product's name was derived from the fact that it was flavored by extracts from cola and coca leaves. Federal investigators discovered that Coca-Cola had, until the turn of the century, contained small amounts of cocaine (which was a legal substance before 1906) but that it had never contained alcohol.

The company continued to insist that, since Coca-Cola did contain caffeine, it provided functional relief from headaches and drowsiness. Not coincidentally, Coke's chief competitor, Pepsi-Cola, advertised that its product contained sufficient pepsin to aid in digestion.

As the United States moved from an agricultural to an industrial economy, its burgeoning urban workforce became increasingly dependent upon manufactured food, vast amounts of which were adulterated by preservatives and cosmetics. Beef, for example, contained boric acid, while pork and beans contained formaldehyde. Although numerous measures to protect consumers had been introduced in Congress beginning in 1879, opposition by the powerful food-manufacturing lobby had barred their enactment. Public opinion was mobilized primarily through the revelations of Harvey W. Wiley, chief chemist for the Department of Agriculture, and his “Poison Squad” of researchers, who fed dubious preservatives to volunteers and publicized the results. The measure allegedly also benefited from the atmosphere created by muckraker Upton Sinclair's graphic novel, The Jungle (1906), which detailed myriad offenses committed in the meatpacking industry.

While the federal law set standards, it was up to the states to enforce its provisions. The 1906 law was strengthened by the Food, Drug, and Cosmetic Act of 1938, which dictated that manufacturers must prove the safety of any drug before it is released for sale.

Welch, Henry, and Felix Marti-Ibanez. The Impact of the Food and Drug Administration on our Society. New York: M.D. Publications, 1956.