Sigourney Weaver's TV movie debut proves worth the wait as Lifetime's fact-based "Prayers for Bobby" revisits ground similar to that broken nearly 25 years ago by the AIDS-themed "An Early Frost" and -thanks to enduring religious-based bigotry toward gays--still feels fresh and poignant. Lifetime doesn't often aim this high with its made-fors, yet aside from some minor questionable stylistic choices by director Russell Mulcahy, this message movie proves powerful without being unduly preachy.

The year is 1979, and Mary Griffith (Weaver) has what looks to be a family plucked from a Norman Rockwell painting, until teenage son Bobby (Ryan Kelley, simply terrific) confides to his brother ("John From Cincinnati's" Austin Nichols) that he dreams of boys, not girls. Refusing to accept that her son is gay, the God-fearing Mary begins a campaign to "cure" him--posting passages of scripture on his bathroom mirror and forcing him into uncomfortable therapy sessions.

"There's no doubt in my mind that God can handle this," she announces to her husband (Henry Czerny), who's mostly a passive observer aside from dragging Bobby along on a camping trip, presumably to help butch him up. 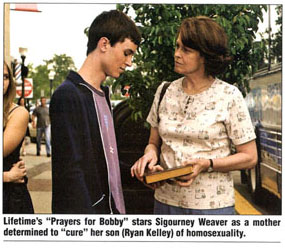 So it goes until Bobby--in an act of pain and desperation -flings himself off a freeway over pass at the age of 20. What follows is Mary's spiritual quest to understand what transpired--a tormented, tear-stained journey for which three hankies won't be nearly enough.

Beautifully adapted by writer Katie Ford from Leroy Aarons' book, the movie takes sentiments that have doubtless been expressed by children to parents countless times--"Why would I choose this?" an exasperated Bobby pleads to his mother--and sharpens the edges of the dialogue to unleash the heartbreak within. That's largely due to the fine performances, which zero in on the characters' shared suffering, frustration and confusion.

Mulcahy does indulge in a few unnecessary flourishes--he uses what are essentially camera tricks to accentuate Bobby's emotional distress, and one extended speech is delivered directly into the camera. Yet these amount to quibbles in what's otherwise a class act. The movie tackles its subject matter with the sort of uncompromising passion not readily associated with Lifetime titles like last year's "Sex and Lies in Sin City: The Ted Binion Scandal."

The common thread among Lifetime's disparate movies is that they pivot on a recognizable actress in a central role. In Weaver, "Prayers for Bobby" has a leading lady whose prayers for a part worthy of her talents have been forcefully answered.