After 13 years in development, exec producers David Permut, Daniel Sladek and Chris Taaffe thought it was their lucky day when three-time Oscar nominee Sigourney Weaver signed on to play small-town religious zealot-turned-gay activist Mary Griffith in the Lifetime movie "Prayers for Bobby." But Weaver says she felt like the one who had gotten lucky.

"I always think casting people don't know what to do with me," she observes with a laugh. "Some people would have said, 'Well, Sigourney can't play Mary Griffith; she's from New York City.'"

In the late 1970s, Griffith's youngest son, Bobby, came out as gay. Convinced his eternal soul was in jeopardy, Bobby's mother steadfastly refused to accept his sexuality. When Bobby's feelings of alienation and despair became unbearable, he jumped off a highway overpass to his death, leaving Griffith shattered and wracked with regret.

"My daughter was graduating from high school at the time, which engenders a certain amount of protectiveness," Weaver recalls. "So I just related to Mary on a very primal level, mother to mother." 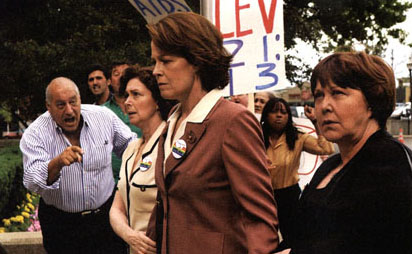 To prepare, Weaver spent time with the real-life Mary Griffith at the family's home near San Francisco. "She has a very self-mocking way," Weaver observes. "I said to her, 'You're so funny and gentle. I'm having trouble putting that together with the scary mother at the beginning of the script,' and she said, 'Well, I was very serious.' She said Bobby's death deprogrammed her pretty quick."

"Prayers for Bobby" marks Weaver's first made-for-TV movie, but it won't be her last. She'll soon be seen playing Gypsy Rose Lee, post-stripping career, in HBO's "Gypsy and Me."

"I grew up genuflecting in front of a television because of my father," says Weaver, daughter of the late NBC executive Sylvester "Pat" Weaver, "but I don't think I quite understood how powerful it is in terms of its potential to bring us all onto the same page until 'Prayers for Bobby.' I got so many emails and people coming up to me on the street to talk to me about it."