Duplex Doppler ultrasonography (DDU) and dynamic infusion pharmacocavernosometry are the conventional diagnostic methods currently used to assess veno-occlusive hemodynamic status of patients with erectile dysfunction (ED). Dynamic infusion pharmacocavernosography is the standard method for demonstrating and visualization of venous leakage. To assess the potential application and utility of magnetic resonance imaging (MRI) in demonstrating and visualizing venoocclusive dysfunction in patients with ED. A total of 28 patients, (32-56 years of age; mean 43.4 [+ or -] 7.2 years), with clinical symptoms of veno-occlusive ED participated in this study. All patients have undergone DDU and dynamic infusion pharmacocavernosometry and pharmacocavernosography to assess presence of venous leakage. Patients were then evaluated with MRI and enhancement by intracavernous injection of paramagnetic contrast agent and erection was induced by intracavernosal injection of pharmacological agents. Diagnosis of ED patients with venous leakage was confirmed in all 28 patients using DDU and dynamic infusion cavernosometry-cavernosography (DICC). Venous leakage was documented by conventional DICC in 21 of 28 patients (75%). Venoocclusive dysfunction in all patients was also assessed by MRI to localize distal, proximal or mixed locations of draining veins from the corpora cavernosa. MRI visualized venous leakage patients, in which DICC did not confirm venous leakage. MRI may be a useful diagnostic tool for assessing venoocclusive dysfunction in ED patients and may improve diagnosis of venous leakage visualization.

Duplex Doppler ultrasonography (DDU) is a useful tool in the diagnosis and assessment of penile hemodynamic integrity in the penile arterial bed utilizing (8) cavernosal artery peak systolic velocity values. Corporal veno-occlusive integrity can be estimated during DDU by measuring end diastolic velocity and vascular resistance values; however, this method is associated with false negative and false positive diagnoses of vasculogenic ED. (9) In particular, false negative results of DDU are often reported in young patients. (10) The standard for assessment of hemodynamic integrity is dynamic infusion cavernosometry-cavernosography (DICC). (3) In particular, pharmacocavernosography is the only diagnostic procedure that enables the visualization of the venous leakage from the corpora cavernosa.

Diagnosis of several penile conditions has been reported using magnetic resonance imaging (MRI), these include the identification of anatomic structures of the penile shaft and crurae, and pathological tissue processes such as hematomas and damaged erectile tissues after blunt injury of the perineum. (11) MRI may visualize pathological changes in the tunica albuginea as well as evaluate the arterial supply of penis in patients with ED. (12-14) Stehling et al. (12) have utilized magnetic resonance angiography (MRA)/MRI to delineate internal pudendal and penile arteries. The goal of this study was to evaluate the potential use of MRI as a diagnostic tool for assessment of venous leakage in men with venous ED.

A total of 28 men with ED and suspected veno-occlusive ED (ages 32-56 years, mean 43.4 [+ or -] 7.2 years) were selected from a total cohort of patients with ED. These patients agreed to participate in this study and were able to pay for the investigations. These patients had complaints of insufficient penile rigidity with rapid detumescence during or before intercourse. All men had sexual partners and failed initial management with selective type 5 phosphodiesterase (PDE-5) inhibitors treatment due to their co-morbidities or the severity of the main disease. Every patient with ED completed the self-administrated questionnaire, the International Index of Erectile Function (IIEF). This prospective study was approved by Hospital's Ethics Committee and all the patients signed an informed consent.

Patients were evaluated for erectile function by intracavernous pharmacological injection of 40mg papaverine. If good erection was achieved within 10 min and maintained for less than 30 min, the patient was considered as having ED due to venous leakage. All 28 patients underwent further testing by conventional DDU and DICC. Signs of corporal veno-occlusive dysfunction during DDU were (a) peak systolic velocity in dorsal vein greater than 10 ml [s.sup.-1]; (b) 30-50% increase in vein diameter; (c) change of dorsal vein blood flow into the opposite direction when Valsalva test was performed. DICC was commenced 5 min after intracavernous injection of 40 mg papaverine at an initial rate of infusion of 10 ml [min.sup.-1]. Then the infusion increased and reduced to determine the level of initiating erection and the level of maintaining erection. An infusion rate greater than 35 ml [min.sup.-1] to initiate erection, for greater than 30 ml [min.sup.-1] to maintain erection and a decrease of more than 50 cm water in corporeal pressure within 30 s following cessation of infusion were considered indicative of veno-occlusive dysfunction. All patients underwent further DICC with the aim to visualize the location of venous leakage from the corpora cavernosa. After intracavernosal injection of 40 mg papaverine, 60-80 ml of contrast media Omnipaque 150 diluted 1:2 with saline solution (total volume 40-60 ml) was infused to opacify the cavernous body. Frontal and bilateral 30[degrees] anterior oblique radiological views were taken to visualize the corpora cavernosa and the penile venous network.

MRI technique is based on intracavernous injection of paramagnetic contrast agent that contains gadolinium, after pharmacologically induced erection. Contrast enhancement is achieved by the gadolinium contrast agents in changing the chemical relaxation properties of extracellular fluid. It results in the reduced time of T1-relaxation and the increased signal intensity from the blood in special impulse sequences. Thus, an effect similar to angiography is obtained. Studies were performed using an MRI scanner 'Magnetom Symphony' (Siemens, Erlanger, Germany) with field strength of 1.5 T. A three dimensional/flash impulse sequence, developed for MRA with contrast enhancement, was used to make 1.5 mm thick slices in a sagittal plane.

The patients were informed and given adequate explanations for the details of the procedure to minimize any anxiety or fear during the investigation. Full rigid penile erection induced pharmacologically was achieved in all patients by administering of 40 mg papaverine for the complete cavernosal smooth muscle relaxation; thus, duration of this erectile status was adequate for performance of the MRI.

To standardize MRI testing results, two healthy men with good axial rigidity at intracavernosal injection test were examined. We recognize that it is impossible to compose a large control group due to ethical principles. In one case, we did not detect any venous leakage during MRI and in the second case visualized minimal traces of contrast media in the periprostatic plexus. We explain this observation as the variant of normal penile blood circulation during erection.

After achieving an erect penis, the first sequence of three dimensional/flash was carried out without contrast enhancement. Then 8-10 ml of contrast agent was introduced into one of the corpora cavernosa within 1 min. Sequential post-contrast measurements, 1-2 min later, were started in the series. After completion of measurements, a Syngo-MR program subtracted pre-contrast and post-contrast images automatically and built reconstructions based on maximum intensity projection on three mutually perpendicular planes. Contrast agents with active component molarities concentration of 0.5 (Magnevist, Schering AG, Berlin, Germany) and 1 (Gadovist 1.0, Schering AG) were used in the study. Nonparametric data, which was a rate of the venous leakage visualization defined by the both methods, were confirmed by specific criteria (z and [chi square]). For parametric data (duration of the both examinations) we used t-test.

The suspected diagnosis of corporal veno-occlusive dysfunction was diagnosed in 28 patients by DDU and DICC and venous leakage was confirmed and documented by these conventional methods in 21 of the 28 (75%) patients. A total of seven patients with mild ED by IIEF scores did not reveal clear radiological signs of venous leakage after they underwent DICC.

It should be noted that after the diagnosis with MRI, none of the patients experienced any complications (severe pain, allergy and priapism) except in two cases where minimal hematoma of penile cutis was noted in the site of injection. None of the patients experienced an anxiety or fear during the MRI throughout the time of the procedure. The limitations of the MRI are that the duration of MRI surpasses that of the conventional techniques (30 [+ or -] 5 min for MRI vs 15 [+ or -] 3 min for DICC; (P<0.001) and the high cost of paramagnetic contrasting medium (Magnevist, Gadovist) as compared to the medium used in DICC (Urographin). 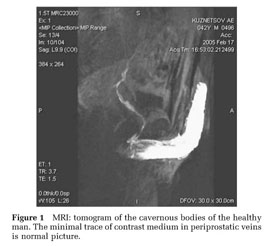 Hemodynamic testing of ED patients is performed to evaluate the integrity of the arterial and corporal veno-occlusive function during erection. Such information is critical for diagnosis, treatment and management of ED. This is more relevant when reconstructive surgical options, such as penile revascularization, or implantation of a penile prosthesis are considered. (8) Reconstructive procedures for venous leakage include surgical liation of the venous channels leaving the corpora (15,16) and radiological embolization of these venous channels. (17) Long-term success after venous surgery remains unsatisfactory. (15) Although the indications for penile revascularization are clear, it is still not known which patient, if any, will benefit from venous ligation and what diagnostic criteria are appropriate. (18) Meuleman et al. (18) reported that candidates for veno-restrictive surgery are men with anatomical abnormalities such as ectopic veins exiting the cavernous corpora or abnormal communications between the cavernosum and glans/spongiosum. From a diagnostic perspective, venous leakage of a minimum extent is not practically visualized by DIM If treatment for corporal veno-occlusive dysfunction is ever to become practical, safe and effective in the future, appropriate diagnostic studies are required. From our point of view, the introduction of MRI with contrast enhancement may improve the assessment of venous leakage visualization. Precise visualization of vein leakage and its three-dimensional reconstruction may assist in treatment planning in the rare cases where surgical treatment may be considered an option. On the contrary, if the significant venous leakage is identified, and pharmacologic vasoactive agents have proven unsuccessful, penile prosthesis insertion may be considered as the last option. An important positive factor in using MRI is that this method has limited radiation compared to traditional DIM On the other hand, MRI is expensive tool and the technique of injection of the contrast media during the procedure requires specialized staff and the time of the MRI procedure doubles that of DIM These limitations may significantly impact the use of MRI in sexual medicine clinics. This would place MRI as a second line hemodynamic diagnostic study in men with venogenic ED.

In summary, this preliminary report provides a proof of concept study in which MRI may become a diagnostic tool for assessing venous leakage in ED patients. Further studies to evaluate the utility of MRI in comparison with DICC are need. We believe that MRI with contrast enhancement will be a useful tool for the visualization venous leakage in ED patients and someday may become part of the clinical management algorithms of men with venous ED. 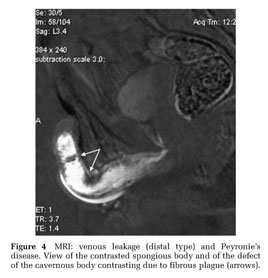 The authors declare no source of funding. We are indebted to Professor Abdulmaged Traish, Boston University School of Medicine for his critical reading and editing of this manuscript.

(6) Traish AM, Guay AT. Are androgens critical for penile erections in humans? Examining the clinical and preclinical evidence. J Sex Med 2006; 3: 382-407. 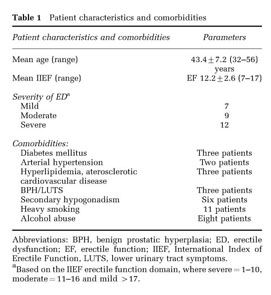 (17) Pepkircioalu L, Tekin I, Boyvat F, Karabulut A, Ozkardeo H. Embolization of the deep dorsal vein for the treatment of erectile impotence due to veno-occlusive dysfunction. J Ural 2000;163:472-475, 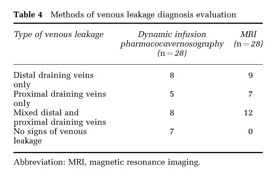