In December 2007, the U.S. intelligence community released a National Intelligence Estimate (NIE) confidently stating that Iran froze its nuclear weapons program in 2003 and would likely be unable to build a nuclear weapon by 2009. This optimistic scenario contradicts the findings of the 2005 NIE that asserted Iran was working rapidly to produce a nuclear weapon. The suspect 2007 NIE on Iran is the result of a recurrent flawed assumption that civilian nuclear power programs are distinctive and clearly discernible from weapons programs. It is also indicative of undue haste in the U.S. intelligence community to reverse course after recent misguided intelligence decisions.

In 2003, the United States overestimated Iraqi nuclear weapon capabilities. The U.S. intelligence community was roundly criticized for being insufficiently skeptical of Iraq's non-conventional weapons claims and of providing the Bush administration with analyses that supported its predetermined resolution to invade Iraq. In the run-up to the release of the 2007 NIE, the media reported a number of stories indicating that the U.S. intelligence community was interested in redeeming its image as an impartial evaluator of international security threats. However, the 2003 overestimation of Iraq's capabilities is probably less instructive on the Iranian situation than the United States' earlier underestimation of the military nuclear intentions of another up-and-coming nuclear power--India.

In the early 1970s, U.S. government intelligence, military, and diplomatic bodies tasked with analyzing India's nuclear intentions concluded that a nuclear test was unlikely. Yet, on 18 May 1974, India conducted its first self-described "peaceful nuclear explosion." U.S. intelligence was shocked by the unanticipated detonation. Most decision-makers assumed that the difficulties in diverting material from peaceful nuclear applications to military ones were so great, that the chances of the diversion being discovered were so high, and that the costs of getting caught were so painful, that no rational country would attempt to do so. The 1974 Indian nuclear test disabused the world of this notion, and in its wake, the United States spearheaded an international effort to close the loopholes in the nuclear nonproliferation regime that made the surprising detonation possible.

The Indian experience is highly analogous to today's Iranian context. Like the 2007 NIE on Iran, most official U.S. assessments of the Indian nuclear program estimated that nuclear weaponization was unlikely. In both cases, policy makers in the United States, Western countries, and in the International Atomic Energy Agency (IAEA) made a clear distinction between civilian and military nuclear programs. They believed that nuclear weapons programs possessed distinctive, perceptible "signatures," in terms of size, shape, auxiliary construction, and power usage, differentiating them from nuclear power programs.

Likewise, the conceptual failing of the 2007 NIE on Iran was its decision to ignore the link between the civil uranium-enrichment process and the use of highly enriched uranium in nuclear explosives. The most serious oversight was the apparent assumption that the technology for enriching uranium for nuclear power is wholly different from the technology for enriching uranium for nuclear weapons. On the NIE's first page, its authors conceded that Iran continues to make great progress in enriching uranium. However, in a footnote, they assert that they have excluded Iran's purportedly civilian uranium conversion and enrichment program from their assessment of its military program.

The former director of Israel's Military Intelligence, Major General (res.) Aharon Ze'evi Farkash, says, "Any distinction between Iranian military and civilian nuclear programs is artificial." This assertion is widely shared. Professor Richard L. Garwin, a U.S. physicist and recipient of the National Medal of Science for his work designing nuclear weapons, wrote in a January 2008 on the "Bulletin Online" (a web publication of the Bulletin of the Atomic Scientists) that the United States should not "put confidence in an arbitrary distinction between an Iranian civil program and a 'nuclear weapon program'." Garwin contends all that is required to convert Iran's declared civilian uranium enrichment program into a nuclear weapons enrichment program is "rearrang[ing] the plumbing at Natanz."

The technology for enriching uranium to reactor grade is not fundamentally different from that needed to enrich uranium to weapons grade. In the civilian uranium-enrichment process, natural uranium is mixed with fluorine and heated until it forms a gas. The uranium hexafluoride is spun in a centrifuge so that a gas with a high concentration of the desired U-235 isotope can be drawn off while the heavier U-238 isotope remains. The extracted gas is fed into another centrifuge, and the process is repeated, with each iteration producing a gas with a higher concentration of U-235.

Iran claims to have succeeded in using the gas centrifuge process to enrich uranium to a level of 3.5 percent U-235, what is known as reactor grade, useful as fuel for civilian nuclear power plants. The process of further enriching the uranium to a weapons-grade concentration of 80 percent to 90 percent U-235 is a matter of adding more centrifuges until the U-235 concentration goes up and about twenty-five kilograms are produced. Frank Barnaby, a British nuclear physicist, told the Guardian newspaper, "You'd need thousands [of centrifuges] to get significant amounts of weapons grade uranium." Iran claims to have connected 3,000 centrifuges in a cascade at its Natanz facility. 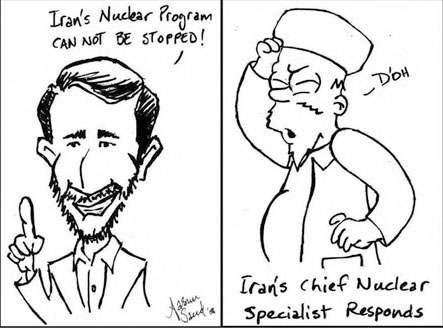 Analysts have rated the Natanz centrifugal enrichment site as capable of housing 50,000 centrifuges. If this potential is realized, Iran's clearly has a capability for creating nuclear bombs. Therefore, by artificially excluding Iran's civilian nuclear program from its considerations, the NIE authors appear to have made an egregious analytical error, which is almost identical to the embarrassing mistake made in assessing India's nuclear capacity.

The 2007 NIE's conclusions suffer from an additional analytical error in failing to acknowledge that Iran has already overcome the most difficult hurdles to producing nuclear weapons. Former U.S. Secretary of State Henry Kissinger noted in his analysis of the NIE that there are three primary components to a nuclear weapons program: the production or acquisition of weapons-grade material, the weaponization of that material into a usable device, and the mating of the device with an appropriate delivery vehicle. The most difficult portion is enriching uranium (or plutonium) to weapons grade. The NIE confirms Iran's recent successful strides in uranium enrichment. In addition, Iran has already produced and continues the development of the Shihab-3 missile system that is capable of launching a nuclear warhead weighing up to 700 kilograms a distance of approximately 1,500 kilometers. Ze'evi Farkash claims Iran's recent missile exercises demonstrated that it is currently aiming its rockets at Israel and Saudi Arabia, targets well within the Shihab's operational range. Many analysts believe that Iran would be foolish to invest the huge sums necessary for developing long-range missiles if its intention was not to mate them with nuclear warheads.

Iran continues to work at a feverish pace on two of the three necessary aspects of a nuclear weapons program--enriching uranium and constructing a delivery system. The NIE concluded that Iran had ceased work in 2003 on the reasonably easy third portion of the program--weaponization. However, the NIE asserted with only moderate confidence that this portion has not been restarted. Israeli intelligence analysts believe that the weaponization program was restarted soon after the 2003 cessation. Nevertheless, this disagreement may be irrelevant. Ephraim Asculai, a nuclear analyst who served for more than forty years on Israel's Atomic Energy Commission, believes that once Iran has the highly enriched uranium, the weaponization program could be restarted and complete within three to six months. In December 2007, Asculai told the New Republic, "Making bombs is a much shorter process than uranium enrichment ... It is a matter of months, not years."

The NIE's authors are surely aware that enriching uranium to weapons grade is merely an extension of the process of reactor-grade enrichment. They are witnesses to India's 1974 manipulation of peaceful nuclear energy technology and know-how to build a nuclear bomb. The U.S.-Iran continues to work apace on both uranium enrichment and a nuclear weapons-appropriate delivery system, two of the three components of a nuclear weapons program. They also understand that once a sufficient quantity of highly enriched uranium is produced, weaponizing it into a workable bomb could take as little as three months. In light of all this, the NIE authors' judgment that Iran is not pursuing nuclear weapons is irresponsible and unconvincing.

Kissinger views the NIE as an inappropriate attempt by the intelligence community to demonstrate that it is not a tool of the executive branch. If Kissinger is correct and the assessment of Iran's nuclear weapons program was consciously blurred, the world may one day have to pay an incalculably high price for the U.S. intelligence community's desire to demonstrate its autonomy. Every indication exists that Iranian President Mahmoud Ahmadinejad would use nuclear weapons to the detriment of U.S. interests. Ahmadinejad has threatened the stability of supplies of oil transiting through the Persian Gulf and has worked to undermine the stability of U.S. allies in the region. Moreover, he has stated his hopes to wipe Israel off the map. An Iranian nuclear weapon would allow the latter and ensure that Iran would be emboldened in accomplishing the former.

The damage that the NIE has caused to U.S. security interests as well as those of its regional allies is immense and is liable to reach unthinkable proportions. Despite the report's sanguine conclusions, this administration and the next would be wise to redouble U.S. efforts to prevent Iran from achieving a nuclear weapon.

SAMUEL SCHWARTZ received his master's degree from the Harvard Kennedy School. He worked for three years as a research fellow at Israel 's Institute of Policy and Strategy and currently is the Associate Director of Lesley University 's extension in Israel.

Copyright: COPYRIGHT 2008 by the President and Fellows of Harvard College.
https://ksr.hkspublications.org/