Eagle syndrome: a rare cause of dysphagia and head and neck pain: a male patient with a history of a motor vehicle accident presented with an unusual combination of symptoms, including sharp pain, jaw spasms, and chronic headaches

A 53-year-old male presented to the family medicine clinic with complaints of a headache, difficulty swallowing, dizziness, and a feeling of constant pain in his neck for the past 10 to 15 years. He stated that he had daily "sharp, boring" pain in his right eye, headache, bilateral jaw pain, difficulty opening his mouth, and shooting pain in his right ear. The patient also had pain when he extended his tongue, spasms of the cheek and tongue, and a feeling of hypersalivation. He described constant pain in the neck and jaw areas that varied from 3 to 9 on a 10-point pain scale and averaged from 5 to 7 daily.

The patient's medical history was significant for a motor vehicle accident in 1982 that resulted in head, neck, and spinal injuries. His surgical history following the accident included a bilateral condylar shave within the temporomandibular joint (TMJ), meniscus reconstruction, and reattachment of ligaments surrounding the TMJ. Additionally, a lumbar (L4, L5) diskectomy was performed with subsequent spinal fusion of those vertebrae.

The patient reported daily nausea, weight loss of 30 lb over the past 3 years, blurred vision, right eye pain, and severe right ear pain with jaw spasms. He said he had chronic bilateral headaches and neck and shoulder pain, especially on the right side of his body. Dysphagia with liquids and solids was present, during which he said he experienced a foreign body sensation, choking while eating, and frequent hoarseness. He also reported difficulty with range of motion (ROM) of the neck, especially in rotation, and lower back pain that radiated to the right pelvic region, buttock, lateral leg, and foot. Neurologically, he complained of dizziness, numbness, and tingling in the thigh, calf, and third, fourth, and fifth toes on the right side. He denied numbness or tingling in the head and neck region. Since the accident, the patient had been chronically depressed and stated that he had severe mood changes and became antisocial when the pain was extreme. During those occasions, he isolated himself in his bedroom for extended periods of time and did not attend to activities of daily living (eg, grooming). 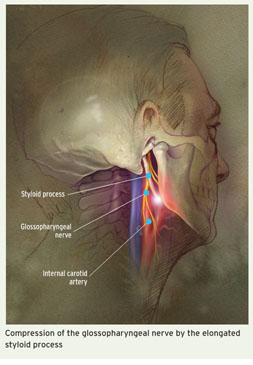 The patient appeared rather stiff during conversation. Examination revealed ptosis of the right eyelid. ROM of the neck was decreased in all movements. No temporal or carotid bruits were appreciated. TMJ was tender to palpation bilaterally with no clicks or subluxations. There was minimal movement of the TMJ in both opening and glide. The tongue protruded only to the lower labial border, and tongue strength was decreased bilaterally. Mouth opening was 23 mm. A palpable, extremely tender elongated mass in the right and left tonsillar fossa was greater on the right side. The trachea was minimally mobile without tug. The differential diagnosis included trigeminal neuralgia, glossopharyngeal neuralgia, nervus intermedius neuralgia, nasopharyngeal mass/lesion, vascular compromise (atherosclerosis), TMJ problems, and Eagle syndrome.

Panoramic plain film imaging demonstrated that the patient's right styloid process measured 85 mm and the left measured 55 mm (Figure 1). CT revealed elongation of the styloid processes bilaterally with some impingement of the right carotid artery (Figures 2, 3, and 4). Plain films and CT confirmed a diagnosis of styloid-carotid artery Eagle syndrome due to the presence of elongated styloid processes.

Eagle syndrome was first described by Dr. Watt Eagle in 1937. Symptoms of Eagle syndrome include dysphagia, foreign body sensation, and throat, neck, and jaw pain secondary to an enlongated styloid process and/or calcified stylohyoid ligament. (1) Diagnosis is made by physical examination with palpation of a firm mass in the tonsillar fossa and radiographic studies including plain film, panoramic views, and CT. Eagle syndrome is classified as a rare disease by the Office of Rare Diseases within the National Institutes of Health. Many clinicians are not familiar with it and may categorize these patients as "complainers" and "drug seekers" Patients are often referred to psychiatry either because clinicians think they are malingering or because of the profound depression that can result from the pain and the failure of timely diagnosis and treatment. 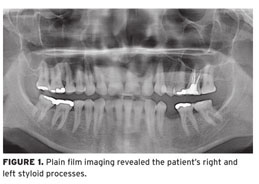 Eagle syndrome pain patterns mimic pain patterns of other syndromes that involve cranial nerves, such as trigeminal neuralgia and glossopharyngeal neuralgia. Whereas the neuralgias have pain patterns sensible for branches of one cranial nerve, Eagle syndrome involves patterns of distribution that include multiple nerves or vascular structures. The extensive involvement of cranial nerves, upper cervical plexus nerves, and vascular structures explains the complex set of symptoms. Only a thorough history and physical examination can discern this syndrome from related neurologic conditions. Clinicians must understand the disease's complex anatomy and disabling symptoms in order to choose the appropriate imaging and proceed with the correct treatment.

Anatomical correlates of Eagle syndrome The styloid process lies anterior to the exit point of the facial nerve (CN VII), the stylomastoid foramen. CN VII carries pain fibers from a portion of the external auditory canal (EAC), which partially explains the radiating pain into the ear. The stylohyoid ligament lies adjacent to the glossopharyngeal nerve (CN IX), which also provides sensory innervation to a portion of the EAC, as does the vagus nerve (CN X), which also exits the skull in this region. The glossopharyngeal nerve is also responsible for pain fibers of the posterior pharynx, which explains the lancinating pain into the throat and why swallowing would trigger this pain. The upper pharynx has a complex innervation, involving CN IX, X, and the cranial portion of the spinal accessory nerve (CN XI), which together forms the pharyngeal plexus. These nerves exit the skull together in this very crowded region, and compression of this plexus caused the patient's dysphagia. The carotid sheath, bearing the internal carotid artery, internal jugular vein, and CN X, lies lateral to the stylohyoid ligament. Branchiomeric motor branches of CN X are greatly responsible for phonation, and compression here would explain hoarseness. The hypoglossal nerve (CN XII) travels lateral to the stylohyoid ligament and is the likely cause of tongue weakness and the inability to protrude the tongue fully in Eagle syndrome. Trigeminal nerve branches (CN V) traverse the face in this region, and irritation of these nerves causes facial pain and pain involving the temporomandibular joint. Either physical obstruction of the protruding styloid process or compromised motor division of the trigeminal nerve may cause an inability to open the mouth fully. Irritation of the motor division of CN V also explains jaw muscle spasms and weakness in this patient.

The most complex and worrisome symptoms of Eagle syndrome are dizziness and eye pain. These may be caused by carotid artery involvement due to the carotid canal's location medial to the styloid process. An elongated styloid process with a thickened, ossified stylohyoid ligament could compress the artery and result in ischemic consequences such as nearsyncope and eye pain. Since the internal carotid artery is a main vascular supply of the brain, its compression has dire consequences. The ophthalmic artery, the first intracranial branch of the internal carotid artery, is at risk of compromised flow in the event of internal artery compression. Ischemic eye pain and visual changes may result in these instances. The patient's dizziness may also have resulted from compression of the glossopharyngeal nerve through compromise of its carotid body nerve branch (the Hering nerve). Furthermore, pressure on external carotid artery branches may result in claudicant jaw pain and contribute to eye pain via altered flow through anastomotic branches of the internal carotid artery. 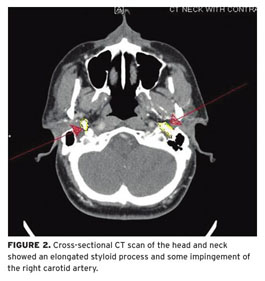 If the carotid artery is compressed, sympathetic nerve fibers that wrap over the walls of these nerves may be come involved and cause ptosis and blurred vision if pupillary reflexes are slowed. The presence of a headache signifies trigeminal nerve involvement, since this nerve is the most important sensory nerve of the face and head and is responsible for most cephalgias. Additional sensory nerve branches in this region include the cervical plexus. Upper branches of the cervical plexus travel with the hypoglossal nerve, and if compressed, would contribute to neck pain.

Treatment Both surgical and nonsurgical treatments can be helpful. Treatment methods include NSAIDs, massage therapy, and injection with corticosteroids. Surgical interventions include transpharyngeal approach with removal of the elongated styloid process, which carries the risk of deep neck space infection and poor visualization in the surgical field. An extraoral approach, which decreases the risk of infection but results in scarring, may also be used. This approach is employed when there is carotid involvement. General surgical risks include carotid artery injury, facial nerve injury, osteomyelitis, infection, hemorrhage, and other nerve damage (eg, sympathetic or cervical plexus nerves). Recommendations for the diagnosis and management of patients with styloid-carotid artery Eagle syndrome include sagittal CT angiography with recon struction when clinical suspicion is high, intraoperative neurophysiologic monitoring, and transcervical approach to resection. (5)

Outcome After discussing treatment options, the patient chose to undergo a right styloidectomy utilizing the external approach with nasal intubation because of his limited mouth opening and the carotid artery involvement. The surgery resulted in a mild wound infection and oral thrush. Four weeks after the operation, the patient reported that his headache and eye pain had significantly decreased, although he continued to experience some dysphagia and hoarseness. He was contemplating another surgery to treat the left stylohyoid calcification.

* Eagle syndrome, first described by W. W. Eagle in 1937, often goes undetected and is classified as a rare disease. 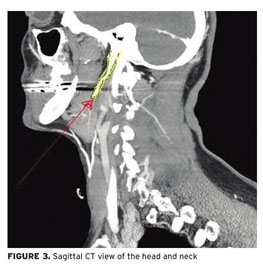 * The cause of Eagle syndrome is an elongated, ossified styloid process. Symptoms include neck pain, dysphagia, headache, and a myriad of other complaints.

* Diagnosis is made through a high index of suspicion and radiographic studies.

* An anatomically rich teaching case, involvement varies and is associated with the diversity of symptoms at presentation. 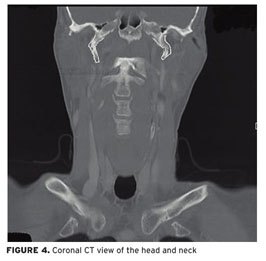 * Treatment options include nonsurgical approaches such as NSAIDs, massage therapy, and corticosteroid injections, as well as transpharyngeal and extraoral surgical interventions.

Laurie Dunn-Ryznyk, and Cheri Kelly are faculty members in the Southern Illinois University PA Program in Carbondale, Illinois. Ms. Kelly also practices In family medicine. The authors have indicated no relationships to disclose relating to the content of this article.