Chronicle is the title of an exhibition held at the Brixton Art Gallery, November 1991. Chronicle is a bare record of events in order of time. But an event, once past, is open to diverse truths: a history, a story, an account--what's the difference between these kinds of records? Is it what they mean? What we learn from them? How we use them, then.

Roxane Permar's installation, 'Extraction', is meticulous, clinically clean; of calculated precision. Two burnt-black, coffin-sized boxes balance a pair of narrow steel rods. Cold steel on charred wood. It hints of abusive power, at facism's sterile, violent implications; the best enemy is a dead enemy, a good soldier is a dead soldier. Why put up with threats if they can be eliminated, ordered into tidy boxes ? In a world where fear begets fear, death is the peaceful solution--but torture? Why does it play such a part in this? Indeed, why is torture so, well, popular?

Roxane Permar avoids judgment of the victim and the aggressor; she focuses on the facts of the trade. A definite clue to reading the work is provided by a statement: "The refinement of cruelty exercised upon her was well chosen to torture her mind equally with her body," from Hester Piatt's story of Anne Devlin. I'm not sure if this is a pity: it directs the mind. Does it need to? A purer test would be to do without text, to let the work speak for itself. This is after all, how history in fact presents itself. Once the text is read, the contamination is done: we read the work in a directed way.

This raises the issue of the artistas author: someone who directs the viewer towards certain pre-conceived conclusions. The text makes the work less open, more defined it is now about "the refinement of cruelty" and will be judged accordingly. As a chronicle, the text refers to a specific event, "the torture of Anne Devlin": it happened. It is proof, an example, a practice of a kind of torture which happened and which maybe continues. 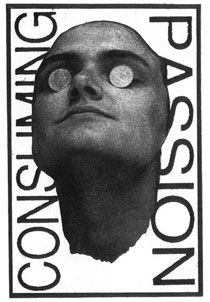 Another sense of chronicle comes to mind. History is written by making sense of apparently disparate clues, momentos, which attract our attention. How ? By, say, their repeated presence, (disclosing wide use). Or a miscontext: What's this doing here? Certain themes emerge, become articulate and are thereby exposed. Thus two burnt-black, coffin-sized boxes balance a pair of narrow steel rods and hint of abusive power, at facism's sterile, violent implications.

Whereas Roxane Permar's work connotates, Jane Barratt is quite explicit in her aim to re-interpret and thus re-claim history. Jane Barratt directs us to the twins, Isis and Osiris of Ancient Eygpt, in a series of photographic, laser colour prints, on linen paper.

I have wished Freud had been keener to identify with the ancient Eygptians instead of his Greek tragic leanings. Both civilisations share the notions of incestuous roots inherent in models based on elitist principles, which beliefs of one god must ultimately be. However, the ancient Eygptians seem to have developed a more feminine aesthetic compared to the Greeks and their Achillean virility, their Odyssean courage. Isis is both wife and sister to Osiris. Osiris, judicious ruler of the underworld, presides over death and the dead. Isis, goddess of fertility, grants birth, prescribes life. Together they are mates, soulmates: equal but not equivalent, not the same. Equal and complementary: together they complete the cycle, they incarnate a recurrence of the flesh.

Jane Barratt's series of prints playfully shows this. Over a background of brightly child-coloured cherries, a female torso has cuts in the thigh and in the side, referring to the ancient symbols of castration and difference. Superimposed are a modern Isis and Osiris sizing up various power symbols. They juggle them, proffer them to each other. Doubt, indecision, temptation are not expressed in the Christian heavy weather of despair, excruciating resistance, forlorn acceptance; these imageries of more traditional romantic strains. Rather, Isis teases, Osiris moves about, together they amble.

'La Parade' by Francoise Dupre is a group of podular wire mesh sculptures bound in paper and glue. The glue sets to present surfaces of sheeny compost and colour. The shapes are bizarre: not specifically identifiable and yet familiar. The pieces work together well, but they also stand on their own; each bit is sufficiently different, yet there is a common sense and taste which lends them coherency as a group. Some dangle invisibly from the ceiling, some hang off a wall, others curve and wind, a few stand upright; one stands on its own three feet.

The sculptures are made with a care for detail and a refinement to do with thoughtful balance. They exhibit a perfectionism I associate with bourgeois living death. But they are imbued with taste--are formed by an articulate intuition. It is this taste, released through an evolved discipline, which makes these sculptures works of quality, works of art. Art which is refreshing and thought-provoking and suggestive all at once. 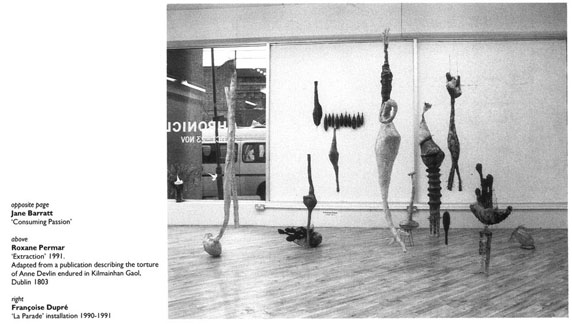 These sculptures tickle, they are funny; funny in a light but not trite way. There are subtle allusions to the female condition: how women have expressed themselves in the past. Thus the paper may consist of photocopies of crochet patterns, a traditional female occupation and hobby, and also an appropriate metaphor for the ways women have sought to control their lives, by their nurturing networks: the family, the home: our havens of stability and security. The weaving strategies of the weak: the endless peripheral tasks of maintaining bonds.

Again, these crochet patterns are a metaphor of female strategies, practised from their positions of dependency. How women have become more visible, more demanding. How they have promoted their needs, to secure more space and tenure from positions of less advantage. The truth of patience they still undergo and their endurance of blind, bullying power. The unforgiving drudgery of repetition upon repetition of petty, mindless tasks. The resentment which swells, until it finds outlets. Such women are enablers. We owe them worthy tributes, true chronicles. Lest we forget.