Ammonia refrigeration systems are typically large energy users and hence good targets for energy efficiency improvements. Common opportunities to reduce energy use and improve energy efficiency include reducing refrigeration load, increasing suction pressure, employing dual suction, decreasing minimum head pressure setpoint, increasing evaporative condenser effectiveness, and reclaiming heat. Estimating savings from these measures is often difficult because of the complexity of the equipment and controls. However, the fundamental energy response of ammonia refrigeration systems to these measures can be estimated using a simplified model. An understanding of these responses is often an important first step to designing or optimizing the performance of actual systems.

Thus, this paper develops a simplified model for simulating a single-stage ammonia refrigeration system and uses the model to estimate how energy use changes in response to the opportunities mentioned above. The results show how system energy use and potential energy savings vary with ambient wet-bulb temperature. The results give designers and operators insight into possible savings opportunities.

Ammonia refrigeration systems are common in commercial and food processing sectors, including grocery, bottling, meat packaging, and brewing. About 7.5% of the total manufacturing energy consumption is used in food processing industry (EIA- 2006 Energy Consumption by Manufacturers). In these facilities, the ammonia refrigeration system is usually the largest energy consumer.

This paper describes a simplified model for simulating a single-stage ammonia refrigeration system and uses the model to estimate how energy use changes in response to common opportunities to reduce energy use and improve energy efficiency. It begins by developing a model for a single-stage ammonia refrigeration system, including models for the evaporative condenser and heat reclaim. The model was developed in MATLAB (Mathworks Inc. 2012a) using the Reference Fluid Thermodynamic and Transport Properties Database (NIST 2010) for refrigerant property data. The psychrometric properties were modeled using methods from ASHRAE (2009). The model is used to simulate energy use from a base case system and show how it varies with ambient wet-bulb temperature. The model is also used to simulate energy use of a system with six energy efficiency opportunities in comparison to the base-case system. The paper then demonstrates how annual energy savings could be estimated using bin data from typical weather files. The results show how system energy use and potential energy savings vary with ambient wet-bulb temperature and give designers and operators insight into possible savings opportunities.

A single-stage ammonia refrigeration system consists of five main devices: the evaporator, compressor, evaporative condenser, high pressure receiver, and an expansion valve. A single-stage system may have multiple devices of the same type to meet system requirements. A system diagram for a single-stage ammonia refrigeration system with high and low temperature evaporators with dual compressors is shown in Figure 1a, and a pressure-enthalpy (P-h) diagram for the system is shown in Figure 1b.

The system model uses the following assumptions: a) ammonia leaves the evaporators and enters the compressors as a saturated-vapor, b) expansion through the expansion valve occurs at constant enthalpy, c) pressure drops through the system (with exception of the expansion valve) are negligible, d) heat gains and losses through the piping and high pressure receiver are negligible, and e) the evaporative condenser fans are controlled with variable frequency drives (VFDs). Based on these assumptions, compressor power and evaporative condenser fan and pump power can be calculated by developing a model with nine input values. These nine input values are the cooling loads of the low and high temperature evaporators, the low and high suction temperatures, the isentropic efficiencies of the compressors, the condenser capacity, the ambient wet-bulb temperature and motor efficiencies. The system model is explained below.

The expansion valve is modeled as a constant enthalpy device. The high pressure receiver is assumed to be adiabatic with negligible pressure drop. Therefore, the enthalpy entering either the high temperature evaporator, [h.sub.4h], or low temperature evaporator, [h.sub.4L], will have the same values as the enthalpy of ammonia leaving the evaporative condenser, [h.sub.3]. Thus, independent properties [T.sub.1h] and [h.sub.3] fix state 4h. Likewise, the independent properties [T.sub.1h] and [h.sub.3] fix state 4L. 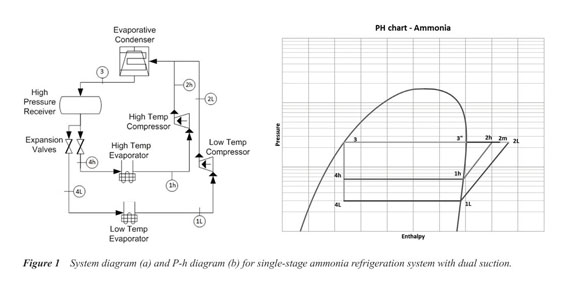 The total power draw for both compressors, W[c.sub.tot], is calculated using the motor efficiency, [[eta].sub.m], as:

The effectiveness, eff, of an evaporative condenser can be modeled as (Manske et al., 2001):

As indicated by Equation 8, the air mass flow rate and the actual condenser capacity for the given outdoor air conditions are required to determine the effectiveness of the evaporative condenser. Typically, manufacturers report volume air flow rate, nominal capacity, and the heat rejection factor (HRF) (Manske et al., 2001). The volume air flow rate is used to calculate the air mass flow rate using the density of air at standard conditions. The HRF, which is a function of both the outside air wet bulb and the saturated condensing temperature (SCT or [T.sub.3]), is used to determine the condenser capacity for a given outside wet-bulb temperature and SCT as (Manske et al., 2001):

Equations 8 and 9 were applied to the specifications listed for a typical forced-counter flow, evaporative condenser (Evapco, 2010) to determine the relationship between SCT and effectiveness for a wet-bulb range of 50[degrees]F to 86[degrees]F (10[degrees]C to 30[degrees]C). Effectiveness was found to be linearly related to SCT with an [R.sup.2] of 0.94 as:

Equations 8, 10 and 11 are incorporated into the refrigeration model, all mass flow rates and state properties can be determined by solving the previous set of equations.

If the condensers do not have enough condenser capacity to maintain the setpoint, the fans run at full speed and an iterative method is used to calculate the head pressure. Hence an "if" statement is required to make the logic work.

Based on the fan affinity laws and accounting for decreased motor efficiency at reduced speeds, the actual power, [P.sub.act], can be calculated from the power at full fan flow, [P.sub.full], and fan motor efficiency, [[eta].sub.m], as:

In addition to the evaporative condenser model, a heat exchanger model can also be added to the base refrigeration models to reclaim heat from the compressor discharge. For the single-stage refrigeration system, an energy balance on the discharge header is performed to calculate the mixed ammonia enthalpy, [[eta].sub.m], as a result of mixing states 2L and 2h. For entering mass flow rates and enthalpies, the mixed enthalpy, [[eta].sub.m], is calculated as: 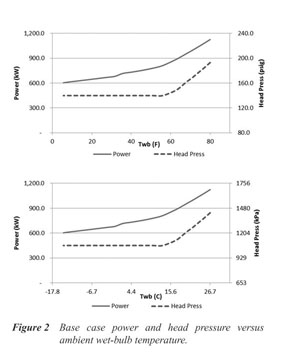 However, not all the heat from point 2m is available for reclaim since some heat is removed from the refrigerant through lubricating oil or cylinder head cooling in reciprocating compressors. Thus, refrigerant exit temperatures are on the order of 175[degrees]F to 195[degrees]F (80[degrees]C to 90[degrees]C) for reciprocating compressors and 120[degrees]F to 130[degrees]F (48[degrees]C to 54[degrees]C) for screw compressors (Stoecker, 1998). This heat loss can be modeled by assuming that the discharge from point 2m passes through a heat exchanger and loses some heat to the oil. [Q.sub.oil], is calculated as:

Where, [eff.sub.hx], is the heat exchanger effectiveness and T2m new is the new temperature of superheated mix, [m.sub.w] is mass flow rate of water, [Cp.sub.w] is specific heat of water at constant pressure and [T.sub.w,in] is the inlet temperature of water.

The pressure drop from the heat exchanger is assumed to be zero. The heat exchanger will also decrease the amount of heat the evaporative condenser must reject. Thus, for a system with a sensible-heat heat exchanger, Equation 11 would be modified to:

Using the method developed above, a single-stage ammonia refrigeration system is modeled as a base case to evaluate energy saving opportunities. The base case system has two refrigeration circuits: a) process load of 200 tons (703 kW) that remains constant throughout the year and b) load from the cold storage rooms that varies linearly from 600 tons (2,110 kW) in summer to 400 tons (1,407 kW) during the winter. Both circuits operate at a suction pressure of 20 psig (240 kPa) corresponding to an evaporating temperature of 6[degrees]F (-15[degrees]C). The minimum system pressure setpoint is currently set at 140 psig (1,066 kPa), but the system could run as low as 110 psig (860 kPa). 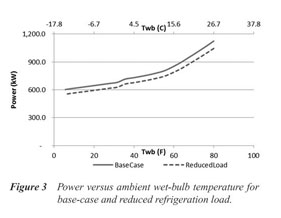 The following sections describe the energy response of the base case system to these measures, and describe some methods of how these measures can be applied. 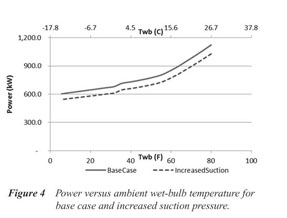 In some facilities, different products or spaces must be maintained at different temperatures. In these cases, power use can be reduced by maintaining different suction pressures for the different products or spaces rather than maintaining a single suction pressure for the lowest temperature requirement in the system. Doing so requires separate sets of compressors to maintain the dual suction pressures. The resulting "dual-suction" system has a high-suction loop, and a low-suction loop with a common head pressure as illustrated in Figures 1a and 1b. In facilities with a single suction system the suction pressure is dictated by the lowest temperature requirement in the system, which is only a fraction of the total load. Most facilities already have multiple compressors. In some cases dual suction can be employed with only a few modifications to the piping and control system. 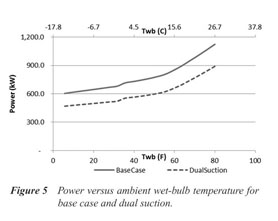 Figure 7 shows power draw of the base-case system and power draw of the system assuming scale buildup is removed and the evaporative condenser capacity increases by 30% to its original design capacity. Note that power draw from reducing minimum head pressure setpoint is reduced only during moderate and high ambient wet-bulb temperatures. 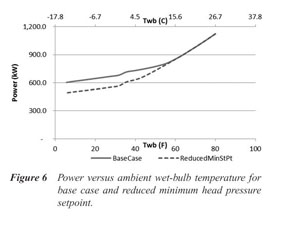 Figure 8 shows that the power draw before and after installing a 60% effective heat exchanger with 55[degrees]F (12.8[degrees]C) water from the hot water storage tank. The reduction in system power draw is minimal; however, about 30% of system power is reclaimed as useful heat. 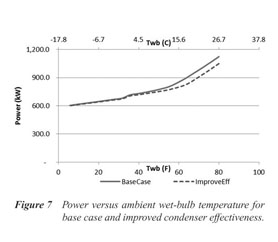 Table 1 shows the annual system energy use of the base-case system and the system with each energy efficiency opportunity. Note that the sum of the individual savings opportunities is less than the savings if all measures were implemented simultaneously. The savings numbers shown below are specific to the system, climate, and assumptions presented here and would be different for other systems, climates, and assumptions. And certainly, a life cycle cost analysis would be necessary to evaluate the cost-effectiveness of each measure. 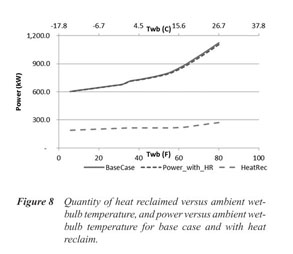 This paper developed a simplified methodology for simulating single-stage ammonia refrigeration systems. It used the methodology to simulate energy use of an example base-case system. It discussed six principles of energy efficient ammonia systems and demonstrated how system power is reduced when each principle is applied. It showed how to use these results to calculate annual energy savings. The magnitude of the savings from each measure depends on many variables; however the results clearly demonstrate that each principle effectively reduces energy use and should be considered when designing new systems or seeking to improve existing systems. Further, a full life cycle cost analysis would be necessary to evaluate the cost-effectiveness of each measure.

General observations about the six principles are:

2. Increasing the suction pressure by 1 psi (6.9 kPa) reduces the power consumption by about 2%

6. Installing a heat exchanger to preheat water can reclaim a significant amount of system power as useful heat. 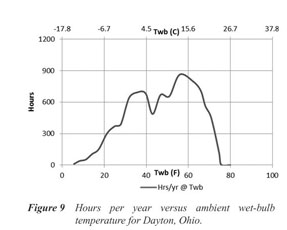 If multiple energy efficiency opportunities are implemented simultaneously, the resulting savings are typically less than the sum of individual savings due to synergistic effects within the system.

The methodology presented here represents an effective method to understand how energy saving principles affect system power in ammonia refrigeration systems. The accuracy of the model could be improved by 1) incorporating compressor part load power characteristics, 2) more detailed modeling of evaporators including evaporator fan control, 3) sequencing and control of multiple condensers. In addition, the scope of the methodology could be broadened to consider other energy saving opportunities including wet-bulb approach control of evaporative condensers, effect of auto-purgers, and effect of subcooling.

The authors are grateful for support for this work from the U.S. Department of Energy through the Industrial Assessment Center program. The paper was improved from suggestions made by reviewers and others in the ammonia refrigeration industry.