Community college students who enrolled in sections of introductory courses that used OER had higher retention rates (by 14 percentage points) than students in non-OER sections, according to a 2021 study published in Educational Researcher. The study defined retention as students who remained in the course past the tuition drop date.

Students who took courses with OER were more likely than peers in earlier semesters without OER to earn grades of A (5.5% increase), A- (7.7% increase), and B+ (1.1% increase), according to a 2018 study in the International Journal of Teaching and Learning in Higher Education, for which Nicholas B. Colvard, C. Edward Watson, and Hyojin Park examined six years of data on UGA instructors who switched from paid materials to OpenStax textbooks. The courses also saw decreases in students earning grades of B or lower. The positive effects of OER usage were particularly visible in end-of-course grades when the data was disaggregated by low-income status (using Pellgrant eligibility), part-time enrollment, and race. 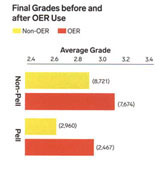