Proximity of hospital affects heart attack survival rate: location may affect mortality in those having their first myocardial infarction

Researchers from Dundee and St Andrews universities investigated how the distance between home and an acute hospital affects the mortality outcome of patients experiencing a myocardial infarction.

In the cohort study, the researchers used a population of about 400,000 in a geographical area of approximately 4,600 square miles. Study subjects were patients experiencing a myocardial infarction between 1994 and 2003 who had not previously been admitted to hospital with acute infarction.

A total of 10,541 subjects were included in the study. Of these, 4,133 died in the community before admission to hospital. Of the 6,408 who survived to hospital admission, 1,010 (15.8 per cent) died in hospital. There were significant differences in gender, age and social deprivation between patients, with women and older patients having higher risks of mortality.

Of the 5,398 discharged from hospital, 1,907 (35.3 per cent) died within a median of 3.2 years of follow-up. After adjustment for rurality and other known risk factors, distance between home and admitting hospital was significantly associated with increased mortality before hospital admission (adjusted odds ratio 2.05 for >9 miles and 1.46 for 3-9 miles when compared with <3 miles) and after hospital discharge (adjusted hazard ratio 1.90 for >9 miles, 1.27 for 3-9 miles). 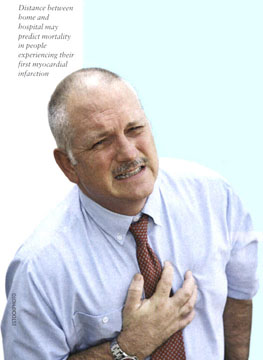 There was no effect of distance on inpatient mortality (adjusted odds ratio 0.95 and 1.02 respectively).

The authors comment that other factors can increase the amount of time between onset of symptoms and treatment, including delays in the decision to call for help and delays in paramedics reaching the patient. While further studies are needed, this study's findings support policies that locate services closer to where patients live.