Shirley Chisholm, the first Black woman elected to Congress and the first Black to seek a major party's nomination for the U.S. presidency, recently died at her home in Ormond Beach, FL. She was 80.

She was in poor health and had suffered several strokes recently, according to a former staffer, William Howard.

Chisholm whose historic Congressional campaign slogan was "unbought and unbossed," was an outspoken advocate for women and minorities and served seven terms in the House. 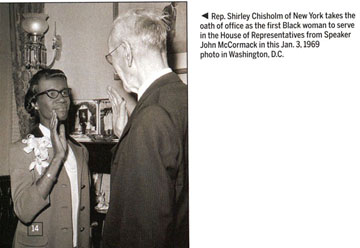 Rev. Jesse Jackson called Chisholm a "woman of great courage." He noted, "She was an activist and she never stopped fighting. She refused to accept the ordinary, and she had high expectations for herself and all people around her."

U.S. Rep. Maxine Waters recalled: "Shirley Chisholm was truly 'unbought and unbossed.' Shirley Chisholm came to Washington as the first Black woman elected to Congress and changed the terms of the debate. She created a platform to discuss issues that had never been a part of the 'old boys' agenda ..."

Elijah Cummings, former chairman of the Congressional Black Caucus, praised the trailblazing leader "who, through courage and wisdom, brought honesty and integrity to the legislative process." 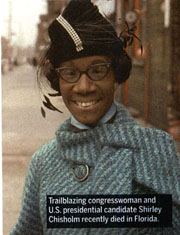 U.S. Rep. Charles Rangel praised her remarkable run for president. "Challenging all accepted practices of politics, this very junior member of the House, an African American woman at that, by declaring for the presidency, single-handedly raised the profile and aspirations of all those newly empowered Blacks and women of that era."

Chisholm, who was elected to the House in 1968 and later ran for U.S. president in 1972, was a riveting speaker who often criticized Congress as being too clubby and unresponsive.

"My greatest political asset which professional politicians fear, is my mouth, out of which come all kinds of things one shouldn't always discuss for reasons of political expediency," she once said.

She served in Congress until 1983 and was a founding member of the Congressional Black Caucus in 1969. 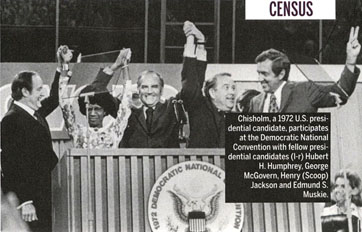 When newly elected to Congress, the outspoken Democrat was assigned to the House Agriculture Committee which she felt was irrelevant to her urban constituency. In an unheard of move, she demanded reassignment and got switched to the Veteran Affairs Committee.

Chisholm was the first woman and the first Black to run for president within the established two-party system.

She ran for the Democratic Party nomination for the presidency in 1972--doing so, she said, not because she expected that she could win, but because she wanted to make a point. She later said her campaign was a much-needed "catalyst for change."

She also knew the challenges of being a woman in politics.

Chisholm, who lived her campaign slogan "ubought and unbossed" throughout her career, always did things her way.

When she was running for president in 1972, she went to visit rival candidate and segregationist Alabama Governor George Wallace who had been shot and was in the hospital. Her visit appalled her followers.

"He said to me, 'What are your people going to say?' I said: 'I know what they are going to say. But I wouldn't want what happened to you to happen to anyone.' He cried and cried," she recalled.

And when she needed support to extend the minimum wage to domestic workers two years later, it was Wallace who got her votes from Southern members of Congress. 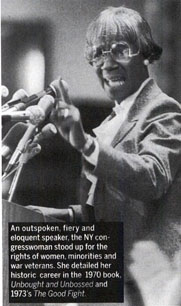 After retiring from Congress in 1983, she was named the Purington Professor at Mount Holyoke College in South Hadley, MA, where she taught for four years. She also was a visiting scholar at Spelman College in Atlanta in 1985 and was a sought-after speaker on the lecture circuit.

Her parents recognized her leadership skills early on, she recalled.

"Mother always said that even when I was 3, I used to get the 6-and 7-year-old kids on the block and punch them and say, 'Listen to me,'" she once recalled in the New York Times.

Born Shirley Anita St. Hill in Brooklyn, NY, on Nov. 30, 1924, she was the eldest of four daughters of a Guyanese father and a Barbadian mother.

Her father, an unskilled laborer in a burlap bag factory and her mother, a domestic, scrimped to educate their children. At age 3, Shirley and her sisters were sent to live on their grandmother's farm in Barbados. She attended British grammar school and picked up her clipped Caribbean accent.

She moved back to New York when she was 11. She graduated cure laude from Brooklyn College with a degree in sociology in 1946 and earned a master's degree in elementary education at Columbia University in 1952.

She started her career as a nursery school teacher and then became director of the Hamilton-Madison Child Care Center in New York and later served as an educational consultant with New York City's Bureau of Child Welfare. She became active in local Democratic politics and ran successfully for the state Assembly in 1964.

She was married twice. Her marriage to Conrad Chisholm ended in divorce in February 1977. She later married Arthur Hardwick, Jr. who died in 1986. She had no children.

She moved to Florida in 1991. A documentary on her historic presidential campaign, "Chisholm '72: Unbought and Unbossed," directed and produced by Shola Lynch, will air nationally on PBS-TV's P.O.V. series on Feb. 7 (check local listing).

Once discussing what her legacy might be, she commented, "I'd like them to say that Shirley Chisholm had guts. That's how I'd like to be remembered."

She is survived by her sister, Muriel St. Hill and a host of relatives and friends.

At JET press time, funeral arrangements were being made by the Leo Chase & Son Funeral Home in St. Augustine, FL. Services were scheduled at the First A.M.E. Church in Palm Coast, FL, with the Rev. Gillard S. Glover, officiating. A private ceremony was slated for the Buffalo Memorial Chapel in Buffalo, NY, with burial at the Forest Lawn Cemetery in Buffalo, NY.