C.R.W. Nevinson, one of the most famous First World War painters, is today better remembered as an outstanding polymath--a futurist painter, print maker, poster designer, novelist, essayist, columnist, and pundit on social and political issues. He was all that and more, and at the time of his death was widely believed to have been the greatest artist of the Great War. 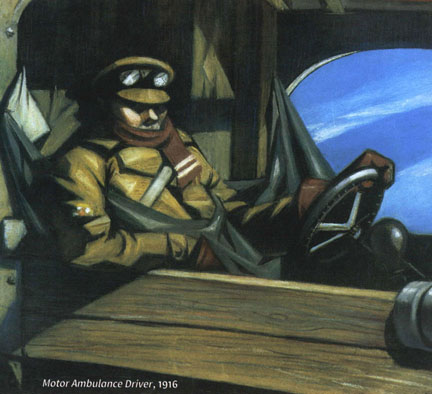 Nevinson had just turned 25 when the world went to war in 1914. Having been advised by his doctor that owing to his fragile health "the army was out of the question," the young Nevinson volunteered for one of the first Red Cross missions as an ambulance driver in France. After a summary course in motor engineering he was shipped to Dunkirk to work with the "dying and dead" in a railway shed. 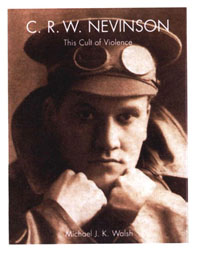 "I was trained in war long before my doomed generation," Nevinson later recalled, pointing to the lessons he had learned from his father, a war correspondent, "but nothing had prepared me for this confrontation with the horror and the smell of death, immersed as I was in the daily panic of the ambulance driver."

Nevinson was the son of two eminent figures in British society, the Manchester Guardian war correspondent Henry Woodd Nevinson and the Suffragist writer Margaret Wynne Nevinson. The two parents were proud to see their son in one of the first units of the Red Cross. Nevinson spent the first four months of the war in the same ambulance unit until it was blown up, together with one of the makeshift hospitals. Nevinson's own health suffered under the strain, and by early 1915 he was back in London for a short leave. Still fuelled by a desire to do something useful, he signed up again with the Royal Army Medical corps and then spent most of his time looking after the mentally wounded and the shell-shocked. It was at that time that a miracle occurred. The convalescent painter was introduced to a beautiful landscape artist, Kathleen Knowlman, who was later to become his wife. The army gave him a two-week leave to get married, a period in which he produced one of his finest paintings, La Mitrailleuse. When the painting was exhibited in March 1916 it proved to be Nevinson's breakthrough picture, catapulting him into the limelight and establishing him in the public mind as the artist prepared to paint the grim reality of trench warfare dominated by military technology.

Many articles in the popular press jumped at La Mitrailleuse as displaying the emergence of the armoured man in the army of Britain and her allies. Much was also made of the fact that, somehow quite late in the day, Britain had finally equipped its troops with steel helmets. 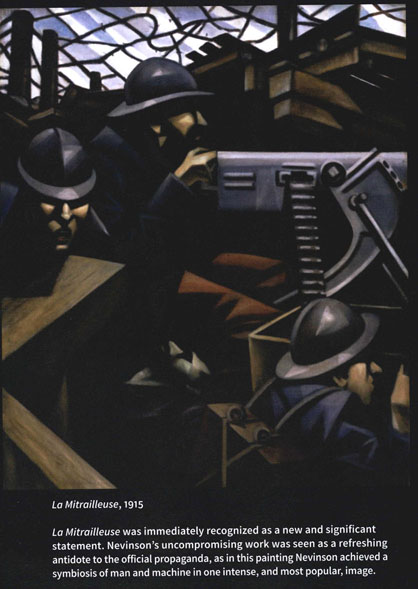 Nevinson gave the impression that for the time being he would paint no future war images. In fact he deprecated his success as a war artist: "I am afraid that much of my pecuniary success has more to do with the public's adoration of war than any appreciation of real artistic value."

Expressing none of the action of war is Nevinson's La Patrie of 1916. Set in a poorly lit wooden shed that served as a casualty clearing station in the first few months of Nevinson's ambulance service, La Patrie depicts row upon row of casualties lying on stretchers on a straw-covered floor. The clearing station become known as "the Shambles." And Nevinson later described the blood, stench, typhoid, and agony in which six workers, including himself, attempted to rescue the three and a half thousand maimed and dying men. 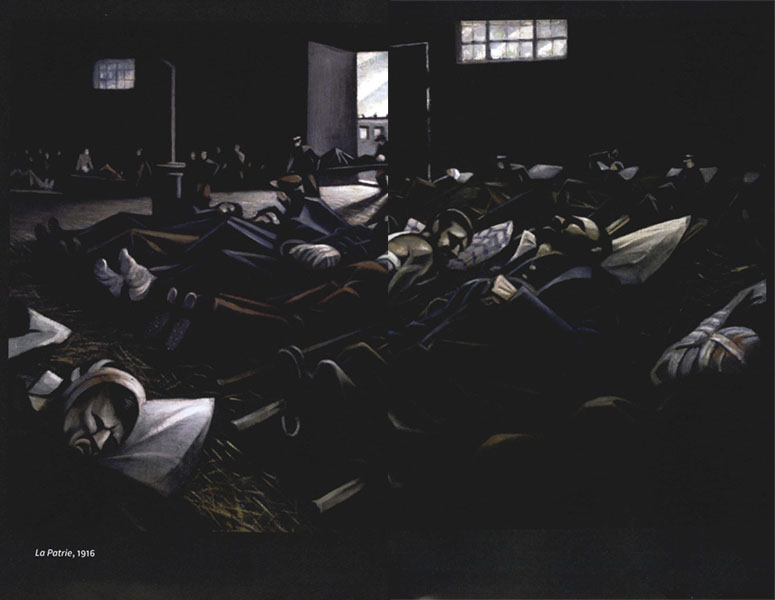 After two years of front-line experience, aged only 27, Nevinson thought that he had finished with the war, but the war had not finished with him, and he still had to produce some of his most striking visions of apocalypse. Even a decade after the Armistice, the celebrated war novelist Henry Williamson wrote that of all the official war artists, Nevinson had uniquely succeeded in communicating the "routine intensity" endured daily by the ordinary enlisted man in the front line.

A life without horizon or hope, the will stolen and the body enslaved, the unimaginable fatigue, misery and pain ... and the feeling of relief only death's oblivion. 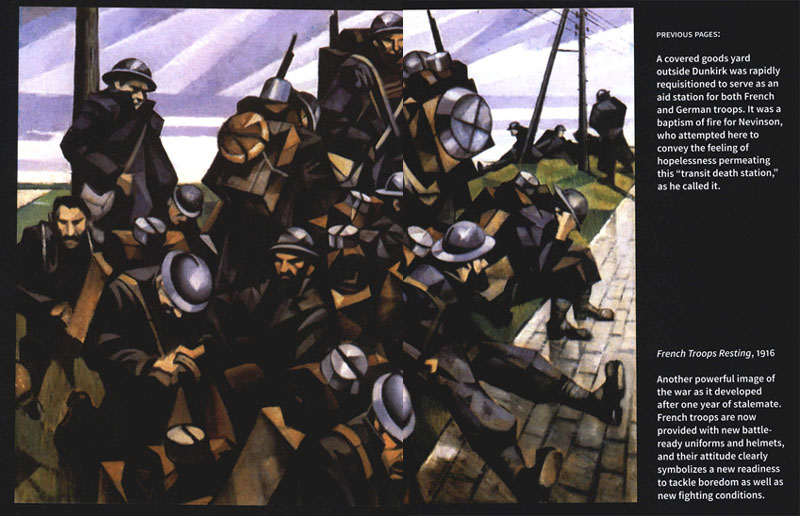 La Mitrailleuse was immediately recognized as a new and significant statement. Nevinson's uncompromising work was seen as a refreshing antidote to the official propaganda, as in this painting Nevinson achieved a symbiosis of man and machine in one intense, and most popular, image. 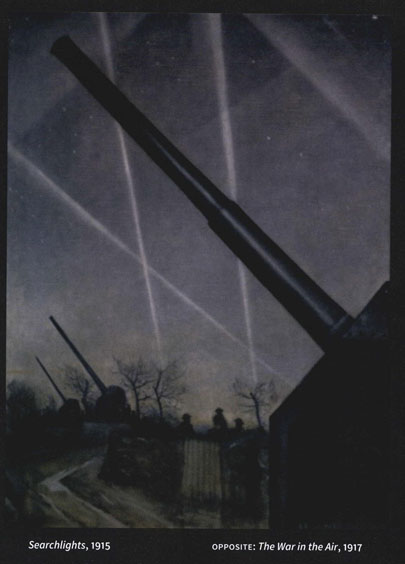 A covered goods yard outside Dunkirk was rapidly requisitioned to serve as an aid station for both French and German troops. It was a baptism of fire for Nevinson, who attempted here to convey the feeling of hopelessness permeating this "transit death station," as he called it. 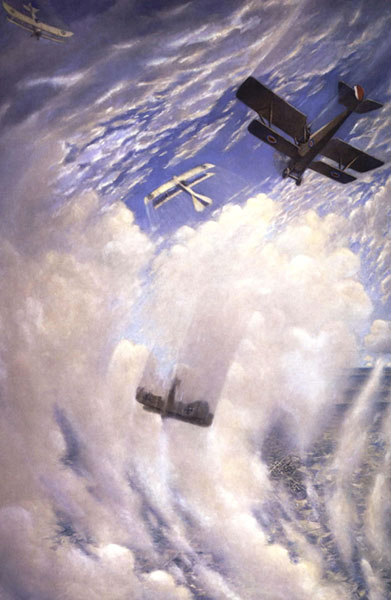 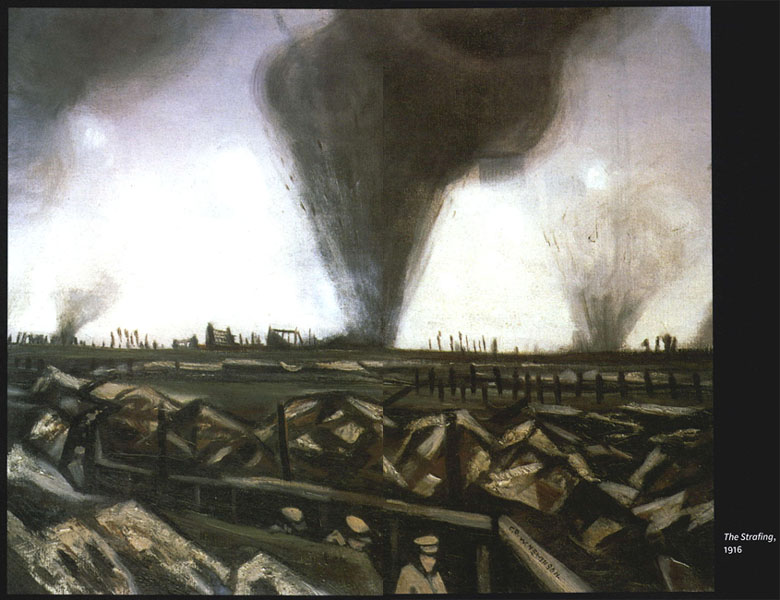 Another powerful image of the war as it developed after one year of stalemate. French troops are now provided with new battle-ready uniforms and helmets, and their attitude clearly symbolizes a new readiness to tackle boredom as well as new fighting conditions.

The first zeppelin raids were directed against East Anglia's ports in January 1915, and searchlights were installed thereafter at key points along the Thames. To a painter like Nevinson, moving searchlights must have been of particular fascination, and they occur in many of his works from 1915 on. 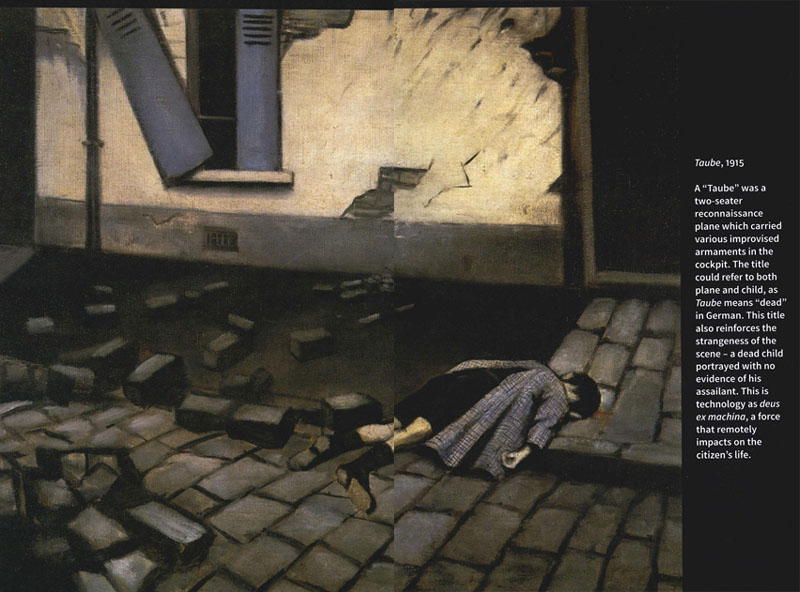 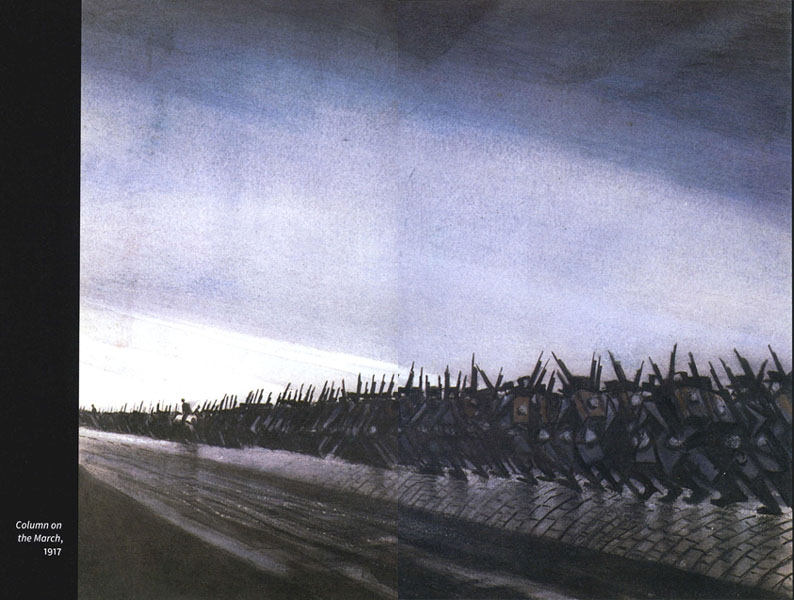 A "Taube" was a two-seater reconnaissance plane which carried various improvised armaments in the cockpit. The title could refer to both plane and child, as Taube means "dead" in German. This title also reinforces the strangeness of the scene--a dead child portrayed with no evidence of his assailant. This is technology as deus ex machina, a force that remotely impacts on the citizen's life. 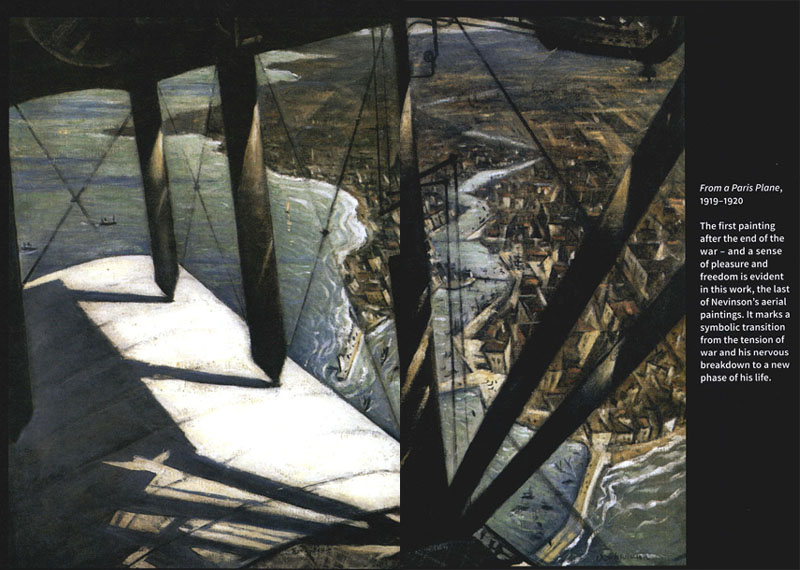 The first painting after the end of the war--and a sense of pleasure and freedom is evident in this work, the last of Nevinson's aerial paintings. It marks a symbolic transition from the tension of war and his nervous breakdown to a new phase of his life.