The afterlife of clothes: how your donated garments make their way around the world

I CRAM A NEW DRESS into my already overstuffed closet, dislodging a sweater that coils to the floor in a heap. I realize there Is just no more space and recall the day my husband and I first viewed this home. "It's a huge house," the sales agent had beamed, "but the closets are too small." She went on to explain her wardrobe habits. "I need space for the wardrobe I wear now," she said, "space for the clothes I would love to wear if I lost 10 pounds, and space for the clothes I wear when I'm really out of shape."

Her dilemma Is now common. In a recent UK study, participants estimated that 60 percent of their wardrobe is "Inactive" --the clothes are just stored, not worn. Yet we continue to buy new clothes, in part because they are so inexpensive American consumers spend an average of $14.60 per item.

Of course, increased consumption leads to Increased waste. In the UK and US, a single consumer produces 30 to 40 kilograms of textile waste per year. In the US,

85 percent of textiles are thrown away without being reused or recycled, accounting for 5.7 percent of the solid waste in landfills. Although precise figures for Canadians are not reported, it's unlikely we're doing much better. The average time consumers keep a garment is just three and a half years. Even then, it's only worn frequently in the first year and then slowly phased into that stockpile of unworn clothes in our overstuffed closets.

Everyone has their own way of cleaning out a closet. I sort my clothes according to condition: I give the best to friends and the rest gets donated or repurposed for cleaning or gardening wear. For Instance, a bright pink swinger coat I bought years ago is now too worn for friends but still too good for mowing the lawn. I'll donate it to a local charity shop, but where will it really go?

Most charity shops sell donated garments in their own stores, providing people in the community with affordable apparel while raising money for the charity's mission. Used garments are a traded commodity, however, and prices fluctuate depending on the market, so charities are mainly Interested In good quality clothes they can resell for a reasonable deal. Perhaps my coat will sell for a price low enough to attract customers and high enough to satisfy the shop.

If no one buys my coat at the shop, the charity will sell it and other unwanted items by the pound to the used-clothing industry. These diverse organizations and corporations specialize In reselling--and sometimes recycling--second-hand garments.

Used clothing is first sorted according to potential buyers and markets, the condition and type of the garment and the fibres in the garment. This is called the "snowflake" industry because each garment is a unique piece. Sorting is a labour-intensive process done by hand, usually at sorting companies located close to where garments are donated--for my pink coat, just outside Toronto.

Once sorted, the textiles are distributed to destinations all over the world; most are sent to locations in Africa. Opponents of this process argue that exporting used clothing from Western countries destroys the local culture and textile industry of non-Western Importing countries. Indeed, more than 30 countries In Africa have import embargos against used clothes for just these reasons. On the other hand, such imports do provide access to a wide range of Inexpensive clothing and can create local jobs restyling, altering, cleaning and distributing garments.

But what about the clothes nobody wants? The majority of unwearable garments are sold to the "shoddy industry." This sub-section of the used-clothing industry disassembles garments Into rags or shreds them into fibres. Shredding is primarily a mechanical process: The fabric is broken down with carding machines Into Its fibre components. This harsh process shortens the textile fibres. The resulting material is too weak to be used for new fabrics but can be used for other applications such as stuffing in mattresses, coffins or upholstery. Some companies have developed more Innovative applications for shredded material. Iris Industries in the US, for example, recycles shredded denim fibres Into new countertops, furniture and even jewels.

What about recycling old fabrics Into new clothing? Currently, only a small portion of donated garments, about three percent, is sold for textile reclamation and recycled into new fabrics. Through a chemical process, these fibres are melted and respun to the same length as virgin fibres with no loss In quality. This spinning process Is possible for all synthetic fibres such as polyester and nylon, as well as cellulosic fibres like rayon, and requires substantially less energy than producing new synthetic fibres. For example, the manufacture of Eco Intelligent Polyester by Quebec-based Victor Group produces 80 percent fewer greenhouse gas emissions than the manufacture of conventional polyester fibre. Recycling natural fibres such as cotton or wool, however, remains more difficult; the fabric can achieve marketable quality only if combined with virgin fibres.

Given rising worldwide demand for fibre, especially from developing countries such as China, recycling old garments Into new fabrics offers a promising means of reducing textile waste in landfills and the environmental cost of producing virgin fibres. So why aren't we recycling more clothes Into new fibres?

Textile recycling Is still a very complex and Investment-Intensive business that requires in-depth knowledge of textiles and their manufacturing. Further technological innovation Is needed to develop stronger and finer recycled materials, especially for organic materials, but recycling is possible and many successful examples exist.

The larger problem is that market demand for reclaimed fibre Is still small. There is not sufficient incentive for the used-clothing industry to engage in the lengthy and costly process of recycling. Moreover, consumers are not accustomed to donating well-worn clothes. The vast majority of garments go straight to landfill without reuse or recycling.

How can we bolster textile recycling?

Textile waste remains an underaddressed problem In Canada but solutions are within our grasp. From manufacture though disposal, steps can be taken to Increase textile recycling and divert waste from landfills.

To increase both the supply and demand for recycled garments, retailers and manufacturers need to commit to corporate social responsibility. Like H&M or Patagonia, this should Include using reclaimed fibres in their new garments, designing products with less environmental impact and establishing take-back programs to divert used clothes from landfills (see "Big Brands That Are Leading The Way," page 38).

Some clothing manufacturers have skirted the issue altogether, by producing garments that do not require recycling, for example. Swiss company Freitag recently developed a line of 100-percent-compostable clothing. While this is a fantastic initiative, biodegradable clothing cannot yet be discarded in green bin programs in Canada because municipalities do not have adequate procedures for composting textiles.

Individual consumers sit at the fulcrum midway between retailers and disposal, and each personal choice affects the balance. We need to buy less and reuse more (see "Strut Lightly," page 34). When cleaning out closets and sorting clothes, we should also remember that fibre value Is more important than the type or condition of garments. Even torn socks can be recycled.

Charities can also help this process, but it's important to understand that charities don't run on charity, ironic though that may be. Charities collect textiles to finance their missions. Their interest in collecting textiles extends only so far as it Is fiscally responsible and enables them to fulfill their mandates. As a result, many charities restrict what they collect. However, charities can better partner with the used-clothing industry, which accepts garments in any condition. Many charities have so far been reluctant to partner out of concern that the association with the private sector might damage their image. They are also hesitant about pairing with their closest competition.

Garment resellers and recyclers should seek out new partnerships to collect more items, both lightly used and well worn. This can be risky because clothing in bad condition costs money to process but gives little in return; collecting a larger volume of garments may help to offset losses. Sorting companies need to invest in new machinery to help determine which fibres were used in each garment. Sorters should also seek out partnerships with recycling facilities. In particular, if sorters cooperate with textile mills specializing in reclaiming fibres, and deliver specific garments that can be recycled--polyester sports jerseys, for example--fewer clothes will be shipped abroad. This would also develop and contribute to a larger market for reclaimed fibres. Investment from the private sector and support from the government is necessary to build and sustain these reclaimed-fabric mills.

It is important for industry associations and non-profits, such as provincial recycling councils, to play a leadership role by making textile recycling a priority. Non-governmental organizations such as Waste Diversion Ontario (WDO) could not only monitor textile waste but also help develop recycling programs in cooperation with industry-funded organizations such as Stewardship Ontario. Right now, a lack of resources and interest from the municipalities prevents the WDO from including textiles in its diversion program.

Municipalities and provinces must recognize the huge volume of textiles in landfills and should consider a textile ban similar to the one the European Union introduced in 2015. Such a ban would immediately increase used-clothing donations without increasing public spending. Municipalities could also help connect property managers with used-clothing businesses to host more donation boxes in shopping malls, universities and other public places. 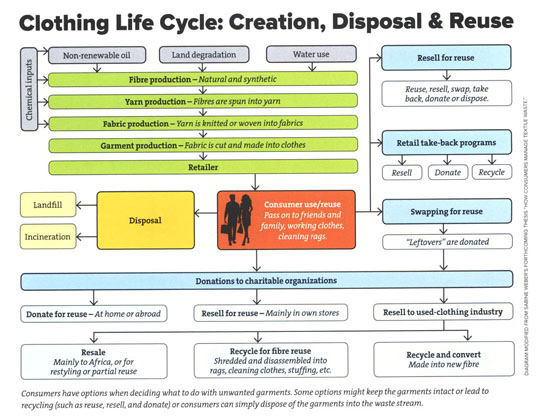 In San Francisco, a city committed to zero waste, charities like Goodwill have donation boxes in residential buildings. Provincial governments could also extend producer responsibility, making the clothing manufacturers and retailers responsible throughout a product's life cycle, particularly when the used clothing needs to be collected and recycled. Doing so would completely change the way companies design, produce and market their products.

SURVEY SAYS: Here's the raw data from my research on how Ontario residents manage their unwanted clothing. These results are based on a sample of 410 people from across the province.

of all participants know where to go to donate their clothes, and only 11 percent found the location inconvenient. A further 5.6 percent of participants call a charity to pick up their used clothing. Participants above 55 years old particularly prefer this way of donating.

is how much of their clothing participants estimated that they donate. However, when asked about what they do with specific items of clothing, this number dropped.

Roughly one-third of participants admitted to disposing of jeans with rips or holes in the garbage --not knowing that the used-clothing industry is particularly keen on collecting jeans no matter the condition.

of all participants think that bringing used clothing back to the retailer is a great idea. 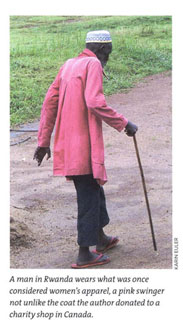 of respondents cited swapping as a means of getting rid of their unwanted clothes. Nearly one-third (28.5 percent) admitted to not knowing what swapping is.

Over one-third cited barriers to donating, including difficulty reaching donation spots, time required and perception that their clothes have no value.

Sabine Weber worked as an apprentice to a tailor, studied apparel engineering in Germany and worked in the fashion industry for 20 years as an international buyer and product manager. Weber is currently writing a master's thesis about textile waste in Environment and Resource Studies at the University of Waterloo.