About the Photographer: Denis Poroy is a contributor to The Associated Press, a worldwide news agency based in New York. 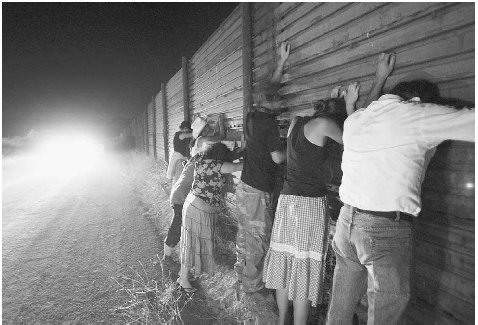 Two major Immigration Acts have been passed in response to the increase in undocumented migration, especially from Mexico: the 1986 Immigration Reform and Control Act (IRCA) and the 1996 Illegal Immigration Reform and Immigrant Responsibility Act (IIRIRA). Both Acts have focused primarily on strengthening the operations of the U.S. Border Control, the enforcement arm of the Immigration and Naturalization Service (INS). In addition, the IRCA introduced penalties for employers found to have knowingly employed undocumented migrants, created a guest worker program for agricultural laborers and provided an amnesty for undocumented migrants who were already long-term U.S. residents. IIRIRA further strengthened the provisions of the IRCA by increasing penalties on undocumented migrants and human smugglers, while at the same time changes were made in welfare legislation, which had the effect of excluding many immigrants, both legal and undocumented, from the public benefits system. 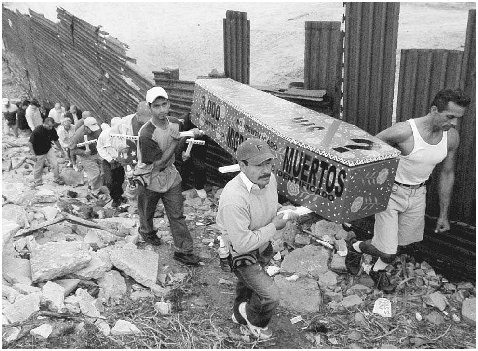 PRIMARY SOURCE: Protesting U.S.-Mexico Border Policy Marchers carry a casket along a section of the US-Mexico border in Tijuana to mark the 10th anniversary of Operation Gatekeeper, October 1, 2004. AP IMAGES.

Although undocumented migrants from Mexico enter the U.S. in a variety of ways, many simply cross the border by foot. Therefore, recent immigration policies have included increasing the budget and employee numbers of the U.S. Border Control, providing it with advanced military equipment and constructing more fences and ditches along the border. The strategy has been to implement specific operations in selected areas known to be main crossing points for migrants. One of these is Operation Gatekeeper, launched in the San Diego border region in 1994. Other intensive border control operations have been conducted in Texas and in central Arizona. The intended purpose of the operations was not only to apprehend undocumented migrants found crossing the border but to act as a deterrent to other potential migrants. It was thought that the terrain along other parts of the border was too harsh and the climate too extreme for migrants to use as a crossing point. In fact, many migrants have been prepared to risk their lives crossing this inhospitable environment.

Although the border control operations appear to have had some success in reducing border crossings, the overall number of undocumented migrants entering the United States from Mexico remains high. Moreover, the border control activity has had the unintended consequences of redistributing border crossings to the more inhospitable areas of the border and increasing the number of deaths among migrants who succumb to the extremes of climate and environment. They have also apparently led to an increase in the use by migrants of agents or "coyotes" to help them find a route into the United States, as well as the Page 227  |  Top of Article development in Mexico of large-scale criminal activity in illegal trafficking of people.

Undocumented immigration, particularly from neighboring Mexico, has long been one of the main items on the U.S. political agenda, and one that rouses considerable public interest and attention. Despite various policy initiatives designed to deter potential undocumented migrants, the overall numbers continue to rise. A conservative estimate based on the 2002 census put the total number of undocumented migrants in the United States at 9.3 million; since this is based on official population statistics, the true number is likely to be much higher and also may have risen considerably since 2002.

A key factor underlying the continuing high levels of undocumented migration is that employers continue to have a demand for low-cost labor, which migrants are prepared to provide, whether or not they can enter the United States legally. Policies designed to make entry to and settlement in the United States more difficult—such as increased border control and exclusion of migrants from welfare benefits— may have some deterrent effect but ultimately many migrants will consider that it is worth taking the risk to escape even worse conditions at home.

In 2004, President George W. Bush announced proposals for a guest-worker program under which migrants would be allowed to enter and work in the United States on a three-year, once renewable permit, andwouldbeallowedtoapplyforgreencardstoenable them to stay in the country. At the same time, the number of green cards issued to low-skilled workers would be increased to accommodate the higher demand. The advantage of these proposals over previous guest-worker programs is that they take account of changing patterns of migration in which seasonal border crossings for temporary work have been replaced by an increased demand for permanent settlement in the United States. If implemented, along with increased border security measures proposed in 2006, their impact on actual levels of undocumented migration and the number of border crossing deaths remains to be seen.

Canales, Alejandro I. "Mexican Labour Migration to the United States in the Age of Globalisation." Journal of Ethnic and Migration Studies 29 (2003).