Recycling is any process that involves the recovery and reuse of materials that were once considered trash. Recycling can be as simple as reusing something—such as a coat or computer—by passing it on for someone else to use. Or, it can be as involved as reprocessing materials in metals, plastics, paper, or glass to make new products.

An Old Idea Is Rediscovered

There is nothing new about recycling. People have found ways to reuse pottery, gold, silver, and bronze for thousands of years. Old swords were melted and reshaped to use as plows. Gold and silver jewelry were melted down and reshaped into other forms. As recently as one hundred years ago, traveling peddlers in the United States and Europe collected rags, bones, and scrap metal waste from household garbage and sold them to manufacturers to make into new products.

During the early twentieth century, Americans relied less and less on recycling. By the 1950s the United States was labeled a "throw-away economy" because Americans were consuming increasing amounts of goods that ended up in garbage landfills.

Recycling was revived in many Western countries back in the 1960s and 1970s as the public became interested in conservation and looked for ways to reduce damage to the environment. In the United States, the first Earth Day in 1970 is often viewed as the official beginning of the modern recycling movement. On that day, hundreds of new recycling centers opened across the country.

At the start of the twenty-first century, the United States recycling efforts are behind many European nations. Americans generate twice the amount of trash as Germans, but recycle less. According to the Environmental Protection Agency, the United States recycled 28 percent of its waste in 2002. States vary widely in their recycling programs. Minnesota is the nation's leader in recycling with a rate of recycling 45 percent of all domestic waste. Montana and Wyoming are at the bottom of the list, recycling less than 5 percent.

Recycling is one of the easiest steps anyone can take to reduce the impact of humans on the environment. On average, each American produces Page 170  |  Top of Article 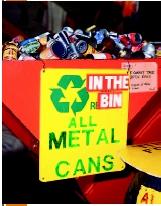 Aluminum cans in recycling bin at Portsmouth Recycling Center. (©Ian Harwood; Ecoscene/CORBIS. Reproduced by permission.) approximately 3.5 pounds of garbage per day. That is 1,500 pounds per person each year—or 90,000 pounds in a lifetime. Without recycling, all this trash ends up in landfills.

In the 1970s many people believed that recycling's greatest benefit was the reduction of the number of landfills because this would reduce the pollution associated with landfills and preserve the land. More recently, researchers have found multiple benefits to recycling.

Most people associate recycling with items such as newspapers, magazines, plastics, aluminum, and glass. The recovery, reprocessing, and reuse of materials from used items is called external recycling and requires public participation.

Because industrial waste accounts for 98 percent of all waste in the United States, many critics of recycling advocate that more attention should be paid to internal recycling than external recycling.

What Things Are Recycled?

There are four groups of materials that are commonly recycled today.

Aluminum. Aluminum cans are the most widely recycled metal. In 1999 roughly two-thirds of all aluminum cans produced in the United States were recycled. However, not all forms of aluminum are recycled. For example, aluminum foil can be recycled, but not all recycling centers are set up to process it.

Paper. Paper recycling is one of this country's most successful recycling programs. By weight, more paper is recycled each year than all other materials combined. The success of this program is in part due to the successful marketing and sale of recycled paper. Recycled paper is widely used today. Unfortunately, paper can only be recycled a limited number of times, because the paper fibers become too short to continue reprocessing after awhile.

Newspaper. Every part of a newspaper can be recycled—including the newspaper and inserts. Newspaper recycling has been profitable for decades.

Steel. Steel cans can be recycled many times. Recycled steel is used for many products such as tin cans. 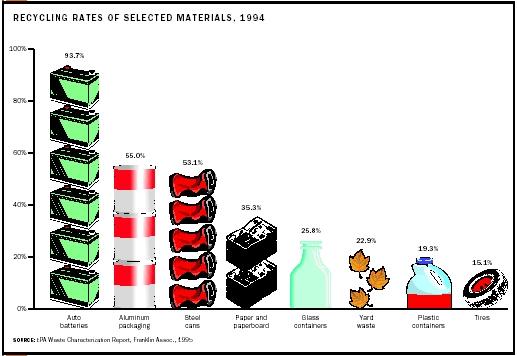 Batteries. Batteries contain many toxic ingredients, such as lead and cadmium, which can cause serious environmental damage if they are buried in landfills. Many recycling centers direct customers to special dealers who accept used batteries.

Computers. Used computers are a challenge for recycling, because they need to be completely disassembled. Recently, a number of companies have Page 173  |  Top of Article

(Characterization of MSW Report, Franklin Assoc., 1995) started exploring ways to do this efficiently and cost effectively. Recycling of computers is becoming increasingly important as the number of used computers continues to grow. One computer manufacturer, Dell, is now offering to take back old computers for reuse or recycling.

Automobile Recycling. For years, the economic incentives of recycling parts from cars, trucks and other motor vehicles has made automobile recycling a big business. In the United States, each year, more than eleven million vehicles are sent to the junkyard because they have been damaged in accidents or have reached the end of their life. About three-quarters of the scrapped vehicles are recycled or their parts are resold. Every part from the doors and windows to engines and transmissions are sold; other recyclable metal parts are magnetically separated from other materials. The rest are shredded and buried in landfills.

Countries in the European Union have been exploring ways to encourage automobile manufacturers to take greater responsibility for the recycling of "end of life" automobiles. Several countries have already implemented "end of product responsibility" programs. For example, in the Netherlands, car manufacturers are liable to pay a recycling fee when they market a vehicle. The fee is then used to cover possible recycling costs.

Composting is a method of recycling organic materials, such as certain food waste and yard clippings, directly into the soil. Although there are many ways to make composts, the basic idea is to mix yard clippings and food waste into a pile with soil and let it decompose; worms, insects, and other organismsPage 174  |  Top of Article help break it down. Once the material in a compost has broken down, the degraded material can be tilled into the soil and applied as nutrient-rich mulch or material for plants.

Composting offers an opportunity to provide a rich source of nutrients for gardens and to reduce the amount of waste taking up space in landfills. Food and yard wastes currently make up about 30 percent of all wastes going into landfills. The airtight design of landfills slows down the decomposition of organic materials because they need oxygen to decompose. One community that has taken composting seriously is Halifax, Nova Scotia. Roughly 30 to 50 percent of their waste is organic matter. In 1997 the Nova Scotia Department of Environment passed a law banning the disposal of food, leaf and yard waste from landfills. Through heightened use of composting and other programs, between 1989 and 2000, Nova Scotia's per capita waste production dropped from 720 kg to 356 kg.

The Netherlands recycled more than three quarters (77%)of the approximately 65 million tons of garbage it generated in 2000. Public pressure to reduce dioxin emissions from incineration plants and pollution from landfills led to landfill taxes beginning in 1995 and a landfill ban on combustible waste in 1997. In addition, government-owned incineration plants were operated below full capacity at the same time as incentives to expand the recyclables market and encourage end-of-life producer responsibility were initiated. Mandatory separation of different types of industrial wastes, with recycling of construction and demolition waste within a government financed infrastructure, and municipal curbside pickups of organic waste for composting, along with separated household recyclables, has decreased landfilling from 35 percent in 1985 to 9 percent in 2000.