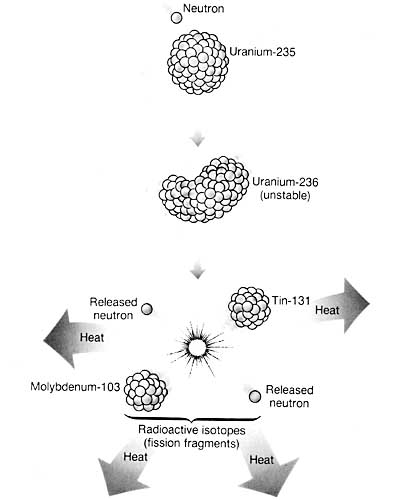 When a neutron strikes the nucleus of certain isotopes, the nucleus breaks or splits apart into two roughly equal and smaller parts (lighter nuclei) in a process known as nuclear fission. The two parts into which the nucleus splits are called fission products. In addition to fission products, one or more neutrons is also produced. The fission process also results in the release of large amounts of energy.

Atomic bombs, developed in the 1940s, obtain all of their energy from fission reactions, whereas hydrogen bombs use fission reactions to trigger nuclear fusion. A long-term environmental problem accompanying the use of these weapons is their release of radioactive fission products during detonation.

The energy available from fission reactions is far greater, pound for pound, than can be obtained from the combustion of fossil fuels. This fact has made fission reactions highly desirable as a source of energy in weapons and in power production.

Many experts in the post-World War II years (after 1945) argued for a massive investment in nuclear power plants. Such plants were touted as safe, reliable, and nonpolluting sources of energy. When operating properly, they release none of the pollutants that accompany power generation in fossil fuel plants. By the 1970s, more than a hundred nuclear power plants were in operation in the United States.

Then, questions began to arise about the safety of nuclear power plants. These concerns reached a peak when the cooling water system failed at the Three Mile Island Nuclear Reactor at Harrisburg, Pennsylvania, in March 1979. That accident resulted in a temporary halt in nuclear power plant construction in the United States. Already authorized at that time, the Watts Bar Nuclear Generating Station (Watts Bar 1), in Tennessee, became operational in 1996. In 2012, the Nuclear Regulatory Commission issued licenses for expansion of the Vogtle nuclear power plant in Waynesboro, Georgia; as of 2020, construction is still in progress. A much more serious accident occurred at Chernobyl, Ukraine, in 1986, when one of four reactors on the site exploded, spreading a cloud of radioactive material over parts of Russia, Poland, and northern Europe. A massive earthquake-generated tsunami striking Japan in 2011 set off a series of nuclear accidents and serious radiation leaks at the Fukushima nuclear power plant complex that closed all nuclear power plants operating in Japan until the first returned online in 2015.

Perhaps the most serious environmental concern about fission reactions relates to fission products. The longer a fission reaction continues, the more fission products accumulate. These fission products are all radioactive, some with short half-lives and others with longer half-lives. The former can be stored in isolation for a few years until their radioactivity has reduced to a safe level. The latter, however, may remain hazardous for hundreds or thousands of years. A completely satisfactory method for storing these nuclear wastes has not yet been developed.