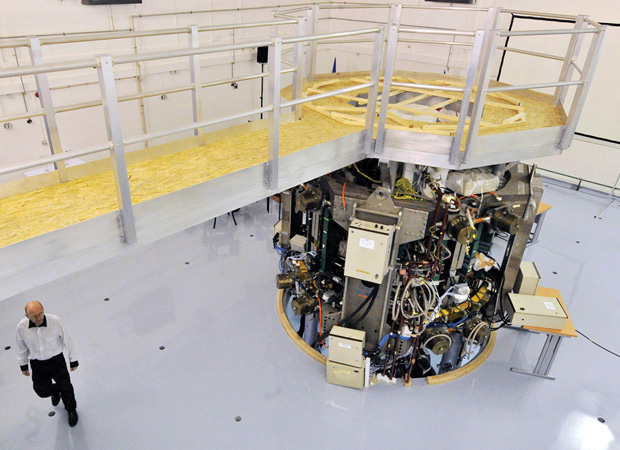 Nuclear fusion is the process commonly found in nature (and very infrequently produced by humans) that occurs when two or more atomic nuclei fuse, or come together, to form a single and heavier nucleus. When this happens, such as inside stars of the sun, a gigantic amount of energy is released or absorbed. The process by which stars produce energy has always been of great interest to scientists. Not only would the answer to that puzzle be of value to astronomers, but it might also suggest a method by which energy could be generated for human use on earth.

In 1938, German-American physicist Hans Bethe (1906-2005) suggested a method by which solar energy might be produced. According to Bethe's hypothesis, four hydrogen atoms come together and fuse--join together--to produce a helium atom. In the process, very large amounts of energy are released.

This process is not a simple one, but one that requires a series of changes. In the first step, two hydrogen atoms fuse to form an atom of deuterium or "heavy" hydrogen. In later steps, hydrogen atoms are regenerated, providing the materials needed to start the process over again. Like nuclear fission, then, nuclear fusion is a chain reaction.

Since Bethe's original research, scientists have discovered other fusion reactions. One of these was used in the first practical demonstration of fusion on earth, the hydrogen bomb. It involved the fusion of two hydrogen isotopes, deuterium, and tritium (T, or H-3).

Nuclear fusion reactions pose a difficult problem. Fusing isotopes of hydrogen requires that two particles with like electrical charges be forced together. Overcoming the electrical repulsion of these two particles requires the initial input into a fusion reaction of very large amounts of energy. In practice, this means heating the materials to be fused to very high temperatures, a few tens of millions of degrees Celsius. Because of these very high temperatures, fusion reactions are also known as thermonuclear reactions.

Temperatures of a few millions of degrees Celsius are common in the center of stars, so nuclear fusion can easily be imagined there. On Earth, the easiest way to obtain such temperatures is to explode a fission (atomic) bomb. That explosion momentarily produces temperatures of a few tens of millions of degrees Celsius. A fusion weapon such as a hydrogen bomb consists, therefore, of nothing other than a fission bomb surrounded by a mass of hydrogen isotopes.

As with nuclear fission, there is a strong motivation to find ways of controlling nuclear fusion reactions so that they can be used for the production of power. This research, however, has been hampered by some extremely difficult technical challenges. Obviously, ordinary construction material cannot withstand the temperatures of the hot, gaseous-like material, or plasma, involved in a fusion reaction. Efforts have been aimed, therefore, at finding ways of containing the reaction with a magnetic field. The tokamak reactor, originally developed by Russian scientists, appears to be one of the most promising methods of solving this problem.

Research on controlled fusion has been a slow, but continuous, progress. Some researchers are confident that a solution is close at hand. Others doubt the possibility of bringing nuclear fusion under human control. All agree, however, that successful completion of this research could provide humans with perhaps the final solution to their energy needs.

The International Thermonuclear Experimental Reactor (ITER) consists of an international group of organizations (from China, the European Union, India, Japan, South Korea, Russia, and the United States) that is working on the largest and most advanced experimental tokamak nuclear fusion reactor ever built in the world. Members of the research and engineering project, with the conceptual design begun in 1988, are building the facility at Cadarache, France. The construction of the facility began in 2008, with its completion expected in 2018. According to the ITER, the purpose of the project is to build "a large-scale scientific experiment intended to prove the viability of fusion as an energy source, and to collect the data necessary for the design and subsequent operation of the first electricity-producing fusion power plant."