Nuclear reactors are complex devices in which fissionable elements such as uranium, thorium, or plutonium are made to undergo a sustainable nuclear chain reaction. 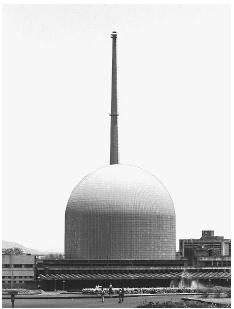 Nuclear reactor at the Bhabha Atomic Research Center in Bombay, photographed in 1997, near the site of a unit that extracted plutonuim for use in India's 1974 nuclear tests. AP/WIDE WORLD PHOTOS.

This chain reaction releases energy in the form of radiation that (a) sustains the chain reaction; (b) transmutes (i.e., alters the nuclear characteristics of) nearby atoms, including the nuclear fuel itself; and (c) may be harvested as heat. Transmutation in nuclear reactors of the common but weakly fissionable nuclide uranium-238 (238U) into plutonium-239 (239Pu) is an important source of explosive material for nuclear weapons, and heat from nuclear reactors is used to generate approximately 16 percent of the world's electricity and to propel submarines, aircraft carriers, and some other military vessels. Nuclear reactors have also been used on satellites and proposed as power sources for locomotives, aircraft, and rockets.

How a nuclear reactor works. A nuclear reactor exploits the innate instability of some atoms—in general, those that have a large atomic number or that contain an imbalance of protons and neutrons—which break apart (fission) at random times, releasing photons, neutrons, electrons, and alpha particles. For some nuclides (atomic species having a specific number of protons and neutrons in the nucleus), the average wait until a given atom spontaneously fissions is shorter. When enough atoms of such an unstable isotope are packed close together, the neutrons released by fissioning atoms are more likely to strike thePage 369  |  Top of Article nuclei of nearby unstable atoms. These may fission at once, releasing still more neutrons, which may trigger still other fission events, and so forth. This is the chain reaction on which nuclear reactors and fission-type nuclear bombs depend. In a reactor, however, the fission rate is approximately constant, whereas in a bomb it grows exponentially, consuming most of the fissionable material in a small fraction of a second.

To produce a sustained chain reaction rather than a nuclear explosion, a reactor must not pack its fissionable atoms too closely together. They are therefore mixed with less-fissionable atoms that do not sustain the chain reaction. For example, in a reactor utilizing235U as its primary fuel, only 3 percent of the fuel is actually235U; the rest is mostly238U, a much less fissionable isotope of uranium. The higher the ratio of active fuel atoms to inert atoms in a given fuel mix, the more "enriched" the fuel is said to be; commercial nuclear power plant fuel is enriched only 3 to 5 percent235U, and so cannot explode. For a fission bomb, 90 percent enrichment would be typical (although bombs could be made with less-enriched uranium). Naval nuclear reactors, discussed further below, have used fuels enriched to between 20 and 93 percent.

Having diluted its active fuel component (e.g.,235U), a typical nuclear reactor must compensate by assuring that the neutrons produced by this diluted fuel can keep the chain reaction going. This is done, in most reactors, by embedding the fuel as small chunks or "fuel elements" in a matrix of a material termed a "moderator." The moderator's function is to slow (moderate) neutrons emitted by fissioning atoms in the fuel. Paradoxically, a slow neutron is more likely to trigger fission in a uranium, plutonium, or thorium nucleus than a fast neutron; a moderator, by slowing most neutrons before allowing them to strike nuclei, thus increases the probability that each neutron will contribute to sustaining the chain reaction. Graphite (a form of pure carbon), water, heavy water (deuterium dioxide or2H2), and zirconium hydride can all be used as moderators. Ordinary water is the most commonly used moderator.

If the chain reaction sustained by a nuclear reactor produces enough heat to damage the reactor itself, that heat must be carried off constantly by a gas or liquid as long as the reactor is operating. Once removed from the reactor, this energy may be ejected into the environment as waste heat or used, in part, to generate electricity. (Electricity, if generated, is an intermediate energy form; all the energy generated in a nuclear reactor or other power plant eventually winds up in the environment as heat.) In the case of a nuclear-powered rocket, such as the one the U.S. National Aeronautics and Space Administration (NASA) seeks to develop with its Project Phoenix, heat is removed from the system by ejected propellant. Liquid sodium, pressurized water, boiling water, and helium have all been used as cooling media for nuclear reactors, with pressurized or boiling water being used by commercial nuclear power plants. Typically, heat energy removed from the reactor is first turned into kinetic energy by using hot gas or water vapor to drive turbines (essentially enclosed, high-speed windmills), then into electrical energy by using the turbines to turn generators.

Nuclear power sources that do not produce enough heat to melt themselves, and which therefore require no circulating coolant, have been used on some space probes and satellites, both U.S. and Russian. Such a power source, termed a radioactive thermoelectric generator or RTG, consists of a mass of highly radioactive material, usually plutonium, that radiates enough heat to allow the generation of a modest but steady flow of electricity via the thermoelectric effect. The efficiency of an RTG is low but its reliability is very high.

Reactor byproducts. The neutron flow inside a reactor bombards, and by bombarding changes, the nuclei of many atoms in the reactor. The longer a unit of nuclear fuel remains in a reactor, therefore, the more altered nuclei it contains. Most of the new atoms formed are radioactive nuclides such as cesium-144 or ruthenium-106; a significant number are, if238U is present, isotopes of plutonium, mostly 239Pu. (Absorption of one neutron by a 238U nucleus turns it into a239Pu nucleus; absorption of one, two, or three neutrons by a239Pu nucleus turns it into a240Pu,241Pu, or242Pu nucleus.) Plutonium is found in nature only in trace amounts, but is present in all spent nuclear fuel containing238U. If it is extracted for use as a reactor fuel or a bomb material, it is considered a useful by-product of the nuclear reactor; otherwise, it is a waste product. In either case, plutonium is highly toxic and radioactive, and remains so for tens of thousands of years unless it is further transmuted by particle bombardment, as in a particle accelerator, reactor, or nuclear explosion. Reactors specially designed to turn otherwise inert238U into239Pu by neutron bombardment are termed fast breeder reactors, and can produce more nuclear fuel than they consume; however, all nuclear reactors, whether designed to "breed" or not, produce plutonium.

This fact has a basic military consequence: Every nation that possesses a nuclear power plant produces plutonium, which can be used to build atomic bombs. Plutonium sufficiently pure to be used in a bomb is termed bomb-grade or weapons-grade plutonium, and the process of extracting plutonium from irradiated nuclear fuel is termed reprocessing. (The alloy used in sophisticated nuclear weapons is nearly pure plutonium, but the U.S. Department of Energy has estimated that an unwieldy bomb could be made with material that is only 15 to 25 percent plutonium, with less-unwieldy bombs being possible with more-enriched alloys.) Every nation that possesses a nuclear reactor and reprocessing capability thus possesses most of what it needs to build nuclear weapons. Several nations, including India and Pakistan, have in fact built nuclear weapons using plutonium reprocessed from "peaceful" nuclear-reactor programs. A large (100 MW electric) nuclear power plant produces enough plutonium for several dozen bombs a year.

Besides producing plutonium that can, and sometimes is, extracted to produce nuclear weapons, every nuclear reactor has the feature that if bombed, its radioactive contents could be released into the environment, greatly amplifying the destructive effects of a wartime or terrorist attack. Nuclear reactors thus have a two-edged aspect: as producers, potentially, of weapons for use against an enemy, and as weapons, if attacked, for an enemy.

Naval nuclear reactors. The primary military use of nuclear reactors, apart from the production of material for nuclear weapons, is the propulsion of naval vessels. Nuclear power sources enable naval vessels to remain at sea for long periods without refueling; modern replacement cores for aircraft carriers are designed to last at least 50 years without refueling, while those for submarines are designed to last 30 to 40 years. In the case of submarines, nuclear power also makes it possible to remain submerged for months at a time without having to surface for oxygen. Furthermore, reactors have the general design advantage of high power density, that is, they provide high power output while consuming relatively little shipboard space. A large nuclear-powered vessel may be propelled by more than one reactor; the U.S. aircraft carrier USS Enterprise, launched in 1960, is powered by eight reactors. Britain, France, China, and Russia (formerly the Soviet Union) have also built nuclear-powered submarines and other vessels.

Although the design details of the nuclear reactors used on submarines and aircraft carriers are secret, they are known to differ in several ways from the large land-based reactors typically used for generating electricity. The primary difference is that in order to achieve high power density, naval reactors use more-highly-enriched fuel. Older designs used uranium enriched to at least 93 percent 235U; later Western reactors have used uranium enriched to only 20 to 25 percent, while Russian reactors have used fuels enriched to up to 45 percent. Small quantities of ex-Soviet submarine fuel have appeared on the global black market; larger quantities could be used as a bomb material.

The first nuclear-powered vessel, was a U.S. submarine launched in 1955, the USS Nautilus. Only three civil vessels (one U.S.-made, one German, and one Japanese) have ever been propelled by nuclear power; all proved too expensive to operate. About 160 nuclear-powered ships, mostly military, are presently at sea; at the peak of the Cold War, there were approximately 250.