About the Photographer: This image was taken by a staff photographer for the Associated Press, an international news agency providing syndicated coverage to thousands of newspapers, television stations, and radio stations around the world.

On September 7, 1968, over a hundred women—mostly middle-aged careerists and housewives—picketed the Miss America pageant in Atlantic City, New Jersey. The protesters denounced the racism of the show (since its 1921 creation the pageant had never had a black finalist) and spoke out against "objects of enslavement"—these articles were bras, girdles, false eyelashes, and various other women's accessories. The women claimed to deplore the commercialization and over extenuation of a woman's body. They refused to speak to men and male reporters, and when a protestor mistakenly did so she was jeered by the others until she ceased. Robin Morgan, an editor and one of the protest's leading organizers, coined the phrase "No More Miss America." Her agenda for this statement, as well as the other organizers', was to remove the fantasy-like image of the female and replace it with that of a real woman—that is, a woman with mussed hair, imperfect make-up, and a figure that has bumps and bulges.

These female protestors crowned a sheep as "Miss America" to show that the pageant denoted women as nothing more than animals, held up a poster of a naked woman with the labels "rump" and "loin," and provided a plethora of other antics to ensure their visibility to the crowd and media outlets covering the event. Throwing bottles of pink detergent into the "Freedom Trash Can," they denounced traditional household duties, declared their abhorrence of confections of cosmetics and nail polish, and relied upon the symbolic burning of the bra to focus the media's attention—particularly after the counter protestors arrived. One of the counter protestors was the 1967 Miss America runner-up, who wore a sign stating: "There's Only One Thing Wrong With Miss America. She's Beautiful."

Media accounts tended to focus on bra burning. The New York Times and various other media sources ran pieces discussing the bra industry's reaction to female protestors burning their bras. Even though little bra burning actually occurred during the height of the women's liberation movement, the media still made it a focus of public concern because it heightened viewer and reader appeal, brought about notions and images of women running amok by disregarding "good fashion and taste," and the footage of bra burning honed in on the standard image of the woman as prim, proper, and perfectly composed and constructed. This newspaper article discussed how the bra industry managed to deflect a potential loss in clientele by implementing an ad campaign showing women how to wear a bra while looking like they were not wearing one. These ads told women to convert to the unwire bras for a more natural look, choose one from a variety of colors, and wear a backless one for dresses that "leave little to the imagination." But, most importantly, women were encouraged to wear bras because the weight of their winter clothes would flatten their breasts, causing sagging and distortion over time, which would later make them unattractive. Attempts like this ad campaign sought to demoralize protestors and uphold standard social conceptions about the female's appearance.

Even though the media focused on bra burning and other more radical actions from the Miss America protest, the event was considered a major victory for the women's movement. The protest received ample media coverage, and the following year women again staged a counter-display outside the competition. The second year proved more fundamental in obtaining national recognition for female activists because the protesting activities nearly caused the pageant to not be televised.

The 1968 Miss America protest is often cited as encouraging women to seek out nearby women's liberation organizations, and it brought beauty pageants under scrutiny for many years. Into the modern era, in various parts of the country, protestors still publicly Page 357  |  Top of Article 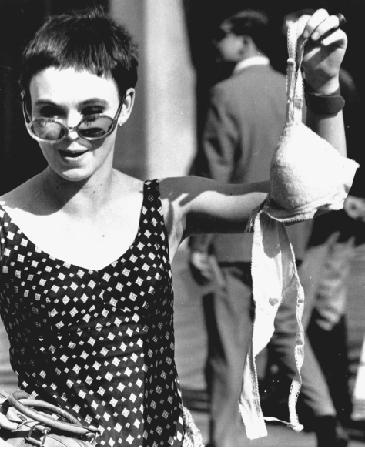 PRIMARY SOURCE: Pageant Protest: A member of the Women's Liberation Party drops a bra in the trash in protest of the Miss America pageant, September 7, 1968. AP Images Page 358  |  Top of Articlestate their dismay at beauty pageants. Oddly, as Miss America slowly lost her public appeal, other forms of beauty infiltrated visual culture. For instance, television shows focused on "making a person beautiful," and an increase in plastic surgeons and over-the-counter beauty fixes have (on some levels) changed the focus of beauty from the female to both the male and the female.

Douglas, Susan J. Where the Girls Are: Growing Up Female with the Mass Media. New York: Three Rivers Press, 1994.

Riverol, A.R. Live from Atlantic City: A History of the Miss America Pageant Before, After and in Spite of Television. Bowling Green, Ky.: Bowling Green State University Popular Press, 1992.