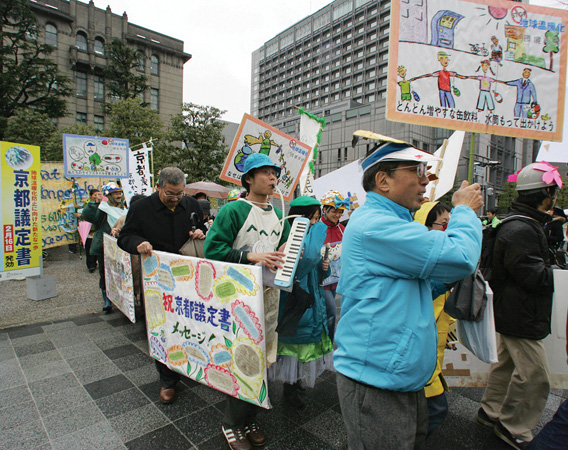 In the mid-1980s, a growing body of scientific evidence linked human-made greenhouse gas emissions to global warming. In 1990, the United Nations General Assembly issued a report that confirmed this link. The United Nations Framework Convention on Climate Change (UNFCC), an accord signed by various nations at the Earth Summit in Rio de Janeiro, Brazil, in 1992, committed industrialized nations to stabilizing their emissions at 1990 levels by 2000.

In December 1997, representatives of 160 nations met in Kyoto, Japan, in an attempt to produce a new and improved treaty on climate change. Major differences occurred between industrialized and still-developing countries with the United States perceived, particularly by representatives of the European Union (EU), as not doing its share to reduce emissions, especially those of carbon dioxide.

The outcome of this meeting, the Kyoto Protocol to the United Nations Framework Convention on Climate Change (UNFCCC), required industrialized nations to reduce their emissions of carbon dioxide, methane, nitrous oxide, hydrofluorocarbons, sulfur dioxides, and perfluorocarbons below 1990 levels by 2012. The requirements were different for each country, with obligations beginning by 2008 and ending in 2012. There were no requirements for the developing nations. Whether or not to sign and ratify the treaty was left up to the discretion of each individual country.

The organization that provided the research for the Kyoto Protocol was the Intergovernmental Panel on Climate Change (IPCC), set up in 1988 as a joint project of the United Nations Environment Programme (UNEP) and the World Meteorological Organization (WMO). In 2001, the IPCC released a report, "Climate Change, 2001." Using the latest climatic and atmospheric scientific research available, the report predicted that global mean surface temperatures on Earth would increase by 2.5 to 10.4°Fahrenheit (1.5-5.9°C) by the year 2100, unless greenhouse gas emissions were reduced. This warming trend was seen as rapidly accelerating, with possible dire consequences to human society and the environment. These accelerating temperature changes were expected to lead to rising sea levels, melting glaciers and polar ice packs, heat waves, droughts and wildfires, changes in agricultural production, and a profound and deleterious effect on human health and well-being.

Some of the effects of these temperature changes are already occurring. According to the Intergovernmental Panel on Climate Change's (IPCC) "Fifth Assessment Report" in 2014, global surface temperatures increased by an average of 1.33 ± 0.32°Fahrenheit (0.74 ± 0.18°C) during the twentieth century and continued their rise in the first decade of the twenty-first century. Sea ice is melting in both the Antarctica and the Arctic. The world's glaciers are melting at an alarming rate. Significant glacial melting in western Antarctica, for example, is likely unstoppable even if humans ceased emitting greenhouse gases today. The sea level is rising.

Since its inception, the Kyoto Protocol has generated a great deal of controversy. Richer nations have argued that the poorer, less-developed nations are getting off easy. The developing nations, by contrast, have argued that they will never be able to catch up with the richer nations unless they are allowed to develop with the same degree of pollution as that which let the industrial nations become rich in the first place.

In the United States, the controversy has waxed especially high. The Kyoto Protocol was signed under the administration of President Bill Clinton, but was never ratified by the Republican-dominated U.S. Senate. Then, in 2001, President George W. Bush backed out of the treaty, saying it would cost the U.S. economy $400 billion and 4.9 million jobs. Bush unveiled an alternative proposal to the Kyoto accord that he said would reduce greenhouse gases, curb pollution, and promote energy efficiency. But critics of his plan argued that by the year 2012, the Bush plan would have increased the 1990 levels of greenhouse gas emissions by more than thirty percent.

Soon after the Kyoto Protocol was rejected by the Bush administration, the EU criticized the action. In particular, Germany was unable to understand why the Kyoto restrictions would adversely affect the American economy, noting that Germany had been able to reduce their emissions without serious economic problems. The Germans also suggested that President Bush's program to induce voluntary reductions was politically motivated and was designed to prevent a drop in the unreasonably high level of consumption of greenhouse gases in the United States, a drop that would be politically damaging for the Bush administration. In rejecting the Kyoto Protocol, President Bush claimed that it would place an unfair burden on the United States. He argued that it was unfair that developing countries such as India and China should be exempt.

The ability of trees and plants to fix carbon through the process of photosynthesis, a process called carbon or C sequestration, results in a large amount of carbon stored in biomass around the world. In the framework of the Kyoto Protocol, C sequestration to mitigate the greenhouse effect in the terrestrial ecosystem has been an important topic of discussion in numerous recent international meetings and reports. To increase C sequestration in soils in the dryland and tropical areas, as a contribution to global reductions of atmospheric CO2, the United States has promoted new strategies and new practices in agriculture, pasture use, and forestry, including conservation agriculture and agroforestry. Such practices should be facilitated particularly by the application of article 3.4 of the Kyoto Protocol covering the additional activities in agriculture and forestry in the developing countries and by appropriate policies.

In June 2002, the fifteen member nations of the EU formally signed the Kyoto Protocol. To take effect, the Kyoto Protocol had to be ratified by fifty-five countries, but these ratifications had to include industrialized nations responsible for at least 55 percent of the 1990 levels of greenhouse gases. Before the EU ratified the protocol, the vast majority of countries that had ratified were developing countries. With the withdrawal of the United States, responsible for 36.1 percent of greenhouse gas emissions in 1990, ratification by industrialized nations was crucial.

The George W. Bush administration opposed the Kyoto Protocol, saying that its own plan of voluntary restrictions would work as well without the loss of billions of dollars and without driving millions of Americans out of work. However, various states and communities decided to go it alone. Massachusetts and New Hampshire enacted legislation to cut carbon emissions. California was considering legislation limiting emissions from cars and small trucks. Over 100 U.S. cities had already opted to cut carbon emissions. Even the U.S. business community, because of their many overseas operations, was beginning to voluntarily cut back on their greenhouse emissions.

By 2012, 192 nations had signed and ratified the Kyoto Protocol, which was set to expire at the end of 2012. Most of the signatory nations had no binding commitments under the treaty. A few countries, including Canada, left the treaty after ratifying it. Conferences in Durban, South Africa (COP 17, 2011), and in Doha, Qatar (COP 18, 2012), produced commitments for legally binding agreements to be negotiated by the Paris conference in 2015, as well as an amendment to the Kyoto Protocol by some prior signatories extending its provisions to 2020. COP19 in Warsaw, Poland, and COP 20 held in Lima, Peru in 2014 aimed to start negotiations toward a new post-Kyoto emissions treaty to be finalized at COP 21 in Paris in 2015. At that meeting, the Paris Agreement replaced the Kyoto Protocol Treaty, and the signers committed to limiting average temperature increase to less than two degrees. In November 2019, President Donald Trump formally announced his attention to withdraw the United States from the Paris Agreement, a process that will become final in November 2020.