China and India sign a border pact in 2003, signaling improved relations. Despite the pact, military actions continue in the disputed lands.

In 2003 Mexico responds to the possibility of a terrorist attack by forming the Ixtoc-Alfa counterterrorism base, primarily to protect Mexico' rich oilfields.

In 2003 Europe experiences its most severe heat wave in almost five hundred years.

A large earthquake strikes the city of Bam, Iran, in 2003, killing over twenty-six thousand people. Despite political tensions with the Iranian regime, the U.S. government and the international community respond with humanitarian aid.

There are various ethnic groups in Darfur, the western region of Sudan, but most fall into two large categories: Arab Sudanese and African (or Black) Sudanese. (The terms Arab, African, and Black Sudanese are used with the understanding that they are permeable distinctions. All Sudanese are African.) Both groups existed in various stages of conflict and peace for several decades following the country's independence from Great Britain in 1956. Historically, the Arab Sudanese are seminomadic herders, whereas the Black Sudanese are largely agriculturalists. There have always been disputes over land rights between the two groups. Herds would often trample or consume crops, and farms would monopolize the bodies of water necessary for the herds' survival. However, these conflicts could often be resolved peacefully. The herds provided fertilizer for the farms in exchange for water and grazing land.

The increasing desertification of the region's once-fertile land in the 1970s led to increased competition for resources between the Arab Sudanese and the Black Sudanese. The deteriorating relations were exacerbated by the Sudanese government's dismantling of the administration system set up by British colonial authorities that gave tribal chiefs considerable autonomy in resolving intergroup conflict. Herders began to destroy irrigation systems and grain storage facilities, and the farmers would retaliate with attacks of their own. As the climate became drier and arable land less plentiful, a famine in the 1980s caused the conflicts to take an even darker turn as more and more resources were at stake.

In addition to a fight over resources, there were also tensions between different ethnic groups. Arab Sudanese controlled the government and discriminated against the Black Sudanese. Therefore, when the land conflict intensified, the government often sided with the largely Arab nomadic herders, lending support and arms. The pro-Arab ideology went beyond land conflicts, however. The Black Sudanese in Darfur were marginalized in terms of political power and denied an equitable share of natural resources and wealth, such as revenue from agricultural produce and oil. Darfur is economically important to Sudan's central government because it contributes a great deal to Sudan's domestic income, and the discrimination against Black Sudanese in Darfur was part of a larger pattern that ensured continued domination by the Arab Sudanese.

Protest of the government's discrimination would find a focal point in a mysterious publication titled The Black Book: Imbalance of Power and Wealth in the Sudan. First appearing in 2000 and distributed through handouts at major mosques in Khartoum, the book details the discrimination Black Sudanese faced in the country as a whole and shows how all of the positions of power were held by Arab Sudanese. A second part was published in 2002. Omar al-Bashir (1944–), the president of Sudan, was angered by the publication, and the government began a search to find the authors of the text, who were not named in the book. The book became widely circulated through photocopies despite government censorship, and it provoked a vigorous political discourse.

Following the book's distribution, two opposition groups emerged that changed the protest from a political discourse to a military assault. The Justice and Equality Movement (JEM) had an Islamist ideological orientation with ties to religious leaders who had split from the Sudanese government in the 1990s. The writers of The Black Book were instrumental in the founding of JEM. The second group, initially called the Darfur Liberation Front (DLF) and later the Sudan Liberation Movement (SLM), was secular in nature.

On February 26, 2003, the SLM publicly claimed credit for an attack against the Arab Sudanese government in the town of Golo, an event largely acknowledged as the first major engagement in the Darfur conflict. On April 25, 2003, the SLM, aided by the JEM, launched an attack in Al-Fashir, the capital of North Darfur. The attackers captured a military base, killing soldiers and destroying aircraft and vehicles. They took as hostage the commander of the base, a major general. It was their largest and most effective attack to that point, forcing the government to take action. The rebels continued on a path of victory, defeating the poorly trained Sudanese army at almost every turn. The government convened to discuss the situation. There was no talk of addressing the rebels' grievances; the government planned reprisals using the Janjaweed.

The Janjaweed were paramilitary Arab Sudanese militiamen, traditionally herders from the nomadic tribes. Before the Darfur conflict, they were usually employed to settle local disputes and had been instrumental in squelching the rebel movement in south Sudan. They were a ready-made army, and the Sudanese government took advantage by recruiting them to fight in the escalating war. The introduction of inexpensive, readily available weapons and other equipment made these men a formidable fighting force. The Sudanese government denied accusations that they armed and deployed the group, but the evidence was clear. The Janjaweed turned the tide of the war with methods that led them and their backers to be charged with human rights violations and, most controversially, genocide.

The Janjaweed proceeded to attack not only the rebels themselves but the villages whose populations shared ethnicity with the rebel groups. The response was disproportionate to the guerrilla attacks on the army and police by the SLM and the JEM. Entire African Sudanese villages and towns were looted and destroyed. In many cases, military helicopters would bomb the villages first and then the Janjaweed would Page 427  |  Top of Article attack during the ensuing panic. All adult men were slaughtered. Children were often dismembered or killed in front of their mothers. Women and girls were raped and mutilated. The Janjaweed destroyed property, and the Sudanese government seized the land to ensure that the survivors never returned. Prisoners in the conflict were often enslaved, with girls as young as eight years old forced into sex slavery. While this horror occurred in African Sudanese villages, Arab Sudanese villages located a few miles away remained untouched. This targeted ethnic cleansing resulted in several tens of thousands dead (estimates vary) and 1.8 million displaced within the first year. 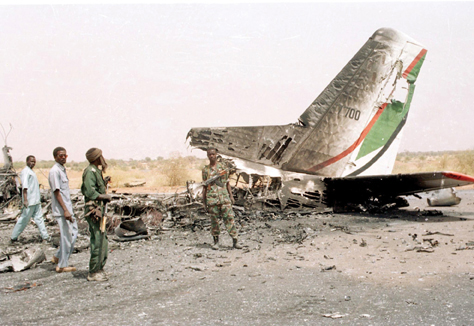 Sudanese soldiers look at a plane destroyed by members of the rebel Sudan Liberation Movement in Al-Fashir in April 2003, at the beginning of the Darfur Conflict. © SALAH OMAR/AFP/GETTY IMAGES

In addition to perpetuating this genocide, President Bashir and the Sudanese government went out of their way to obstruct international intervention. Visas for aid workers were denied or severely delayed, and once they were in the country their movements were restricted, making it hard for them to perform their work. The government vehemently denied interfering with the aid workers' movements for nefarious purposes, pretending instead concern for their safety. Meanwhile, the destruction of African Sudanese villages and the attacks upon the people continued unabated. Many observers publicized this genocide and asked for the international community to act.

Defined loosely, genocide is a systematic, state-supported in part, a group based on nationality, race, religion, or ethnicity. The atrocities in Darfur clearly fell under this definition, but still a debate raged. An inquiry by the United Nations (UN) concluded that the Sudanese government was not engaging in genocide, but in crimes against humanity or ethnic cleansing. That decision was criticized by human rights groups, such as Amnesty International and Human Rights Watch, as an attempt by the UN to avoid taking action. A verdict of genocide would have required the UN to take reasonable action, such as putting troops on the ground and actively involving itself in the conflict as per the Genocide Convention that promised “never again” after the atrocities of the Holocaust during World War II (1939–1945).

Another reason for the delay in international response was battle fatigue over the war in Iraq. Many members of the international community were reluctant to pledge more troops to yet another war. President Idriss Déby (1952–) of neighboring Chad tried to mediate negotiations between the Sudanese government and the rebels, but talks quickly deteriorated. In the meantime, international humanitarian groups and various nongovernment organizations were quietly gathering evidence and testimony regarding the seriousness of the conflicts. U.S. satellites provided irrefutable evidence of bombed and deserted villages. Despite this evidence, it took almost a year after the conflict began in earnest for it to receive an appropriate international response. The word “genocide” was not used in an official capacity until the United States, in late 2004, addressed the UN General Assembly and urged immediate action.

Yet this action did not include substantial military efforts, and initially, the African Union (AU) was the only entity to place troops on the ground. The UN eventually sent a small number of troops the effectiveness of which was thwarted by the Sudanese government. President Bashir worked to halt or severely cripple international action. The UN largely responded with effective humanitarian efforts and ineffective economic sanctions that went unenforced. Russia and China ignored the arms embargo and continued supplying the Sudanese government with arms and military aircraft. China moved to protect its investment in Sudan's oil industry, collaborating with the Sudanese government and undermining UN sanctions.

The sustained conflict sparked a debate regarding the effectiveness of the Genocide Convention and the international community's power to enforce it. In 2009 the International Criminal Court (ICC) issued an arrest warrant for President Bashir, but as Sudan did not recognize the ICC's jurisdiction, the warrant acted more as a verbal condemnation than a document with real power. Bashir would have to be arrested in a country that recognized the court's power, making it unlikely that he would visit a participating nation. Bashir reacted to the warrant by expelling and disbanding aid organizations, drawing accusations against the ICC for hurting negotiations and harming the peace process. The debate also continued over the word “genocide” and whether naming a conflict as Page 428  |  Top of Article such has any real influence over the actions implemented by the international community.