It's all in your head: the mental aspect is a huge part of survival in any type of crisis

Why does one person stay relatively calm and rational in an emergency while another person in the same situation panics or freezes up? How come some people survive long, life-threatening ordeals, pushing on and hanging on despite terrible conditions and odds, while others either fall apart or give up and die?

Many of us have asked these questions at one time or another, perhaps while wondering how we would do if faced with a particular crisis; if, say, we were attacked by a grizzly, or stranded in a mountain snowstorm, or our bush plane went down deep in the wilderness, or any of dozens of other scenarios. Would we do the right things? Could we stay fairly calm relative to the situation, not panic or freak out or go into brainless automatic reactions? Would we fight to save our lives or would we succumb to despair and hopelessness?

No one, of course, truly knows how he or she will respond in a crisis. What I want to consider here are some of the reasons why people respond badly in an emergency, and then look at ways to prevent or counteract those tendencies. The "mental aspect" is a huge part of successful survival in any type of crisis--sometimes it is the most important factor of all. Fortunately, it is something that anyone can strengthen through understanding, technique, and practice. 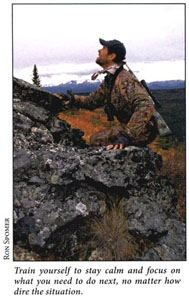 Thanks to modern neuroscience and cognitive psychology, we have a much better understanding of how the brain, mind, and emotions actually work. Of particular relevance to survival is the way fear is initiated and processed in the human brain. This operation is too complex to explore in detail here, but the simplified version begins with a small part of the brain known as the amygdala. (Technically, the amygdalae, since there are two, one on each side of the brain.) When something dangerous or fearful is perceived, or even imagined in some cases, the message reaches the more primitive part of the brain--the amygdala--before it reaches the frontal cortex, where higher-brain function such as reasoning and rationality take place. The amygdala reacts by sending out alarm signals that cause automatic bodily responses. You might, for instance, be walking in venomous snake country and suddenly perceive something lying nearby on the trail. You feel an internal danger alarm that causes you to instantly freeze. A split second later, the perception-transmission reaches your cortex, which allows you to process the alarm and figure out the situation. You realize that the "snake" is just a twisty stick. Even so, you notice that your heart is beating harder and faster than it was. That's because the amygdala, once it receives a danger signal, stimulates the release of hormones that cause a wide range of body/mind responses, including an elevated level of fear.

Unfortunately, the fear reaction can, and often does, backfire. It causes people to revert to automatic behavior that might be inappropriate to the situation. You run in terror from a grizzly and provoke a chase and attack, rather than standing still and following the proper guidelines for bear encounters. Or you freeze and stay frozen in a situation where you need to move fast--as when the snake/stick near your feet really is a venomous reptile. The well-known "fight, flight, or freeze response" describes three kinds of automatic behavior. Another is what I call "the fumble response," which is the inability to ably perform a response/intention because of the effects of fear. This is the person trying to unholster a sidearm in self-defense but who can only fumble and drop the weapon. Or the actual example of a hunter who, faced with a grizzly attack, drew his .44 magnum and then threw it at the bear instead of firing.

The fumble response is no doubt at least partially caused by the effects of alarm and fear on cognitive function. The hunter who threw the handgun wasn't "thinking" when he did it; most likely he couldn't think, because his fear reaction impaired his cognitive ability. Researchers have identified several types of fear-induced mental addling. One of the worst (along with outright panic) is called brainlock, or "cognitive paralysis," during which a person simply can't move into productive motion that improves the situation. A striking example occurs with skydivers--some very experienced--who, having their main chute fail, plunge to their deaths without even attempting to pull the backup cord. They are simply fear-stunned into immobility, unable to think or to remember what to do to save themselves.

Perhaps the most mysterious response to a survival crisis is what psychology professor and military survival instructor John Leach calls "the won't to live," the opposite of "the will to live" that is so often cited as the core necessity for surviving a life-threatening ordeal. The "won't to live" refers to those who seem to simply give up and die, in many cases when there is no need to, when possible or even obvious survival options are available.

"A mental tipping point is reached; living is hard, dying is easy," Leach writes. He calls this "psychogenic [mind-caused] death," and prefers to think of it as a biological process with a cognitive trigger, though one not yet understood.

At the practical level of life and our ventures into the field, the big concern and question is: How can we avoid or prevent brainlock, panic, and inappropriate automatic reactions? How can we overcome the "won't to live" and push on where others might give up and die? Here are a few techniques that can help improve crisis-response ability:

Anticipate what could go wrong. This means considering the reality of possible trouble, and preparing for it mentally as well as physically. If this seems too obvious to mention, think again. Consider the many hunters who go afield without a compass, or a survival kit, or bear spray in grizzly country. "It won't happen to me," is a common belief-thread among those who get hopelessly lost, or who succumb to the elements, or have a bad time with a bear. "I don't want to think about that dark stuff," is another form of denial, which might reduce anxiety in the short run but only sets one up for serious trouble later. Anticipating possible danger is not paranoia or worry. Properly framed, it is realism combined with proactivity (as in assembling the survival kit, packing the compass, buying and taking along the bear spray), which actually creates a sense of confidence and optimism.

Physical training. Again, obvious, but often neglected. The value of actually practicing the techniques or actions that could save your life can't be overstated. If working memory is paralyzed or impaired by the fear response, what's known as "procedural memory" can take over. So that, even if you revert to an automatic response, the odds are better that it will be an appropriate response for the situation.

Mental rehearsal. With or without actual training, once you have an idea of what could go wrong, you should visualize yourself dealing competently and calmly with that situation. The science and evidence for the effectiveness of this kind of exercise is irrefutable. It is used by top-level athletes and by the elite military to enhance performance, maintain calm, and increase self-confidence. Also known as mental priming, it has been shown to improve the efficiency of brain function. The key is to relax your body and mind, then visualize your calm, competent survival response in as much vivid detail as possible. One expert advises: "If you can't train, visualize. Then your response will become automatic."

Mantras and rules. Use simple slogans, or mantras, repeated over and over, to drill a concept or procedure into your mind and brain, so that it will come to you even in the midst of danger. One Air Force survival-training slogan, for example, is simply "Maintain 98.6." This means protect your core body temperature before worrying about food or water. Also emphasized and ingrained in memory is The Rule of 3, memorized and repeated in this order: 3 seconds without spirit and hope; 3 minutes without air; 3 hours without shelter in extreme conditions; 3 days without water; 3 weeks without food. There, in a nutshell, is the priority list for a certain kind of survival situation, easy to remember even when you're scared and anxious about how to proceed.

For longer-duration survival situations, the way to avoid panic, despair, or apathy is to consciously cultivate what some military schools call PMA, or a positive mental attitude. One way to do this is to avoid overwhelm-thinking, such as trying to figure everything out at once, or making large, negative predictions ("We'll never make it," "I'm going to die out here," and so on). In the face of uncertainty or overwhelm, ask yourself: What's the one thing I can do right now, no matter how small, to improve the situation? Then begin doing it. Set small goals and focus on them. Breathe and meditate: Simply sit or lie still and close or half-close your eyes. Consciously relax as you breathe in slowly through your nostrils, pushing out gently with your belly to get a full, diaphragmatic breath. Focus only on your breath as you exhale slowly through your mouth. Even a few minutes of this exercise can calm your mind and defuse the fear reaction before it has a chance to expand and explode into panic.

In situations that require endurance, ongoing courage, and the will to live, use whatever you can to keep the flame of motivation lit. A photo or memory of loved ones and the desire to see them again can help you gain the strength to carry on. Think of your life goals and dreams, all the things you still want to do, see, and experience. Focus on reasons to stay alive.

Copyright: COPYRIGHT 2015 Hearst Magazines, a Division of the Hearst Corporation. Reprinted with permission of Hearst.
http://www.hearst.com