By: Karl Marx and Friedrich Engels

About the Author: Karl Marx (1818–1883) and Friedrich Engels (1820–1895) are the German-born founders of modern international communism. Both men wrote The Communist Manifesto, but Engels generally edited and translated Marx's writings. They attacked the state as the instrument of oppression.

The Communist Manifesto grew out of criticism of early industrial society. Socialists condemned economic inequalities and attacked the capitalist system that permitted the exploitation of workers. Karl Marx and Friedrich Engels explored the sociology of poverty and the social structures that allowed a concentration of power and wealth in the hands of relatively few individuals.

Marx and Engels were the most prominent of the nineteenth century socialists. These German-born theorists believed that the social problems of the nineteenth century were the inevitable results of a capitalist economy. They argued that capitalism divided people into two main classes, each with its own economic interests and social status: the capitalists, who owned industrial machinery and factories (the means of production), and the proletariat, consisting of wage workers who had only their own labor to sell. Intense competition between capitalists trying to make a profit resulted in ruthless exploitation of the working class. To make matters worse, according to Marx and Engels, the state and its coercive institutions, such as police forces and courts of law, were agencies of the capitalist ruling class. The function of the state was to maintain capitalists in power and enable them to continue their exploitation of the working class.

Marx developed these views fully in Capital: Critique of Political Economy, a long, theoretical work that was published in three volumes from 1867 to 1894. Together with Engels, Marx also wrote a short pamphlet, The Communist Manifesto, in 1848. In this work, Marx and Engels aligned themselves with the communists, who aimed for the abolition of private property and the creation of a totally egalitarian Page 23  |  Top of Articlesociety. Famously, The Communist Manifesto asserts that all human history has been the history of struggle between social classes. The work can be viewed as representative of mid-nineteenth century European thought on the problems of the working class.

Does it require deep intuition to comprehend that man's ideas, views and conceptions, in one word, man's con-sciousness, changes with every change in the conditions of his material existence, in his social relations and in his social life?

What else does the history of ideas prove, than that intellectual production changes its character in proportion as material production is changed? The ruling ideas of each age have ever been the ideas of its ruling class.

When the ancient world was in its last throes, the ancient religions were overcome by Christianity. When Christian ideas succumbed in the 18th century to rationalist ideas, feudal society fought its death battle with the then revolutionary bourgeoisie. The ideas of religious liberty and freedom of conscience merely gave expression to the sway of free competition within the domain of knowledge.

"Undoubtedly," it will be said, "religious, moral, philosophical and juridical ideas have been modified in the course of historical development. But religion, morality philosophy, political science, and law, constantly survived this change."

"There are, besides, eternal truths, such as Freedom, Justice, etc. that are common to all states of society. But Communism abolishes eternal truths, it abolishes all religion, and all morality, instead of constituting them on a new basis; it therefore acts in contradiction to all past historical experience."

What does this accusation reduce itself to? The history of all past society has consisted in the development of class antagonisms, antagonisms that assumed different forms at different epochs.

But whatever form they may have taken, one fact is common to all past ages, viz., the exploitation of one part of society by the other. No wonder, then, that the social consciousness of past ages, despite all the multiplicity and variety it displays, moves within certain common forms, or general ideas, which cannot completely vanish except with the total disappearance of class antagonisms.

But let us have done with the bourgeois objections to Communism.

We have seen above, that the first step in the revolution by the working class, is to raise the proletariat to the position of ruling as to win the battle of democracy.

The proletariat will use its political supremacy to wrest, by degrees, all capital from the bourgeoisie, to centralize all instruments of production in the hands of the State, i.e., of the proletariat organized as the ruling class; and to increase the total of productive forces as rapidly as possible.

Of course, in the beginning, this cannot be effected except by means of despotic inroads on the rights of property, and on the conditions of bourgeois production; by means of measures, therefore, which appear economically insufficient and untenable, but which, in the course of the movement, outstrip themselves, necessitate further inroads upon the old social order, and are unavoidable as a means of entirely revolutionizing the mode of production.

These measures will of course be different in different countries.

Nevertheless in the most advanced countries, the following will be pretty generally applicable. 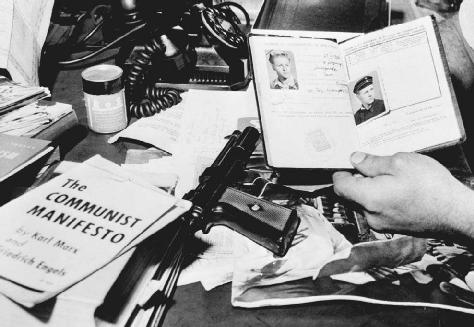 The Communist Manifesto and other items captured by police when they arrested a striking electrical plant worker in 1954. © Bettmann/Corbis.

When, in the course of development, class distinctions have disappeared, and all production has been concentrated in the hands of a vast association of the whole nation, the public power will lose its political character. Political power, properly so called, is merely the organized power of one class for oppressing another. If the proletariat during its contest with the bourgeoisie is compelled, by the force of circumstances, to organize itself as a class, if, by means of a revolution, it makes itself the ruling class, and, as such, sweeps away by force the old conditions of production, then it will, along with these conditions, have swept away the conditions for the existence of class antagonisms and of classes generally, and will thereby have abolished its own supremacy as a class.

Throughout the second half of the nineteenth century, socialism and socialist parties spread rapidly throughout Europe and the United States. The doctrines of Marx and Engels came to dominate European and international socialist thought. Revolutionary socialists like Marx and Engels urged workers to seize control of the state, confiscate the means of production, and redistribute wealth equitably throughout society. Such a revolutionary takeover occurred in Russia, leading to the creation of the communist Soviet Union that controlled much of Eastern Europe until 1989. The collapse of the Soviet model has given support to evolutionary socialists who argue that socialists should work through representative governments to elect legislators who support socialist reforms.

Despite the apparent failure of revolutionary socialism, The Communist Manifesto remains one of the most widely read secular books in any language. The work has maintained a substantial worldwide Page 25  |  Top of Articlereadership as a classic of political philosophy and a crucial historical document, while remaining key to many popular struggles for liberation. With major international movements forming around fair trade, ecology and sustainability, and economic and political justice, interest in The Communist Manifesto is higher at the turn of the millennium than it has been since the 1970s.

Hamori, Paul A. The Communist Manifesto: A Framework for a Critical Analysis and a Cursory Interpretation. Muncie, Ind.: Ball State University, 1974.