Enacted by president Franklin D. Roosevelt (in office 1933–45), the New Deal was a series of programs created between 1933 and 1939 in response to the Great Depression (1929–39), which caused massive unemployment and poverty. The New Deal began immediately after Roosevelt's inauguration in 1933 and set out to relieve the suffering of the unemployed and impoverished, restore the economy to a healthy level, and reform the financial system in order to prevent future fiscal catastrophes. Despite Roosevelt's efforts, the economy did not fully recover until World War II (1939–45), when the massive federal spending needed to supply the war effort reinvigorated the economy. Although the New Deal did not fully rejuvenate the U.S. economy, it redefined the role of the federal government in American life and its relationship to the corporate world.

Roosevelt's first act under the New Deal was to restore confidence in the nation's banking system. During the Depression much of the American public withdrew their funds and kept their money at home because they severely distrusted the banks. In an effort to rebuild that trust, Roosevelt closed all banks for eight days and called a special session of Congress to discuss bank reform legislation. Three days after the closure, Congress passed the Emergency Banking Act, which required the Treasury Department to inspect all banks before they could reopen. Reassured by Roosevelt, Americans returned a billion dollars to the banking system within a few weeks of reopening the banks.

Franklin D. Roosevelt (in office 1933–45) was the 32nd president of the United States and the only president elected to four consecutive terms of office. According to historians, Roosevelt is consistently ranked with George Washington (1732–99) and Abraham Lincoln (1809–65) as one of the greatest U.S. presidents. He is known for lifting the nation out of deep economic despair and extending economic security to millions of Americans.

Roosevelt was born on January 30, 1882, to a prominent, wealthy family in Hyde Park, New York. He graduated from Harvard University before attending law school at Columbia University. His heart set on politics, he was elected to the New York State Senate in 1910. From there he became president Woodrow Wilson's (1856–1924) assistant secretary of the navy and then governor of New York in 1928. In 1921, at age 39, he became seriously ill with polio, which caused permanent paralysis of his legs. His lasting disability may have later influenced his decisions regarding social security policies and aiding the needy.

In 1933 Roosevelt fulfilled his longtime ambition of becoming president and promised to balance the federal budget and relieve the misery of those most affected by the Great Depression (1929–39). He called his reform, recovery, and relief efforts the New Deal. He also helped pass the Social Security Act, which assisted the elderly, widows with children, and the chronically disabled. He died of a cerebral hemorrhage on April 12, 1945, after victory had been achieved in World War II (1939–45) and the economy had been repaired.

With the banking crisis under control, Congress turned its attention to the farm sector. The Agricultural Adjustment Act, passed in May 1933, provided subsidies to farmers who reduced their crop production, in order to raise the value of U.S. agricultural goods. The act was overturned by the Supreme Court in 1936 and was replaced by the Soil Conservation and Domestic Allotment Act, which reinstated the government's ability to pay farmers to reduce production. In addition, Roosevelt 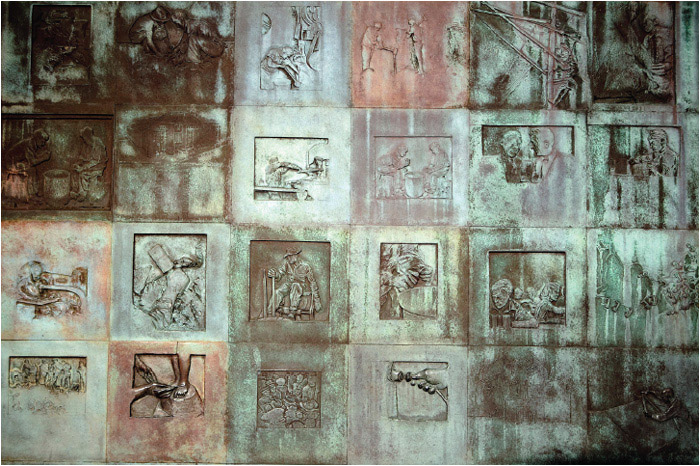 The 54 social programs of the New Deal are memorialized in this bronze sculpture by Robert Graham. The piece is located at the Roosevelt Memorial in Washington, D.C. BRENDAN SMIALOWSKI/GETTY IMAGES

The industrial economy posed the greatest challenge to the Roosevelt administration. On one hand, businesses wanted to relax antitrust laws to allow the cooperation of trade associations to stabilize prices. On the other hand, New Dealers wanted businesses to allow workers to organize unions and bargain collectively to increase wages. The resulting compromise was the creation of the National Recovery Administration (NRA) in 1933, which asked businesses to abide by a temporary “blanket code” that stipulated a minimum wage between 30 and 40 cents an hour and a maximum workweek of 35 to 40 hours and forbid child labor. Unfortunately, federal officials had little experience running such a large program, and it was ultimately deemed a failure. In 1935 senator Robert F. Wagner (1877–1953) introduced the National Labor Relations Act, which gave workers more federal protection when organizing unions. Encouraged by the law, union leaders and workers stepped up organizing efforts, and the number of unionized workers jumped from 3 million in 1932 to 10 million in 1941.

On April 18, 1933, Roosevelt took U.S. currency off the gold standard (which tied the amount of paper money in circulation to the amount of gold available in the U.S. Treasury and the price of gold on the international market). The change enabled the government to manipulate the value of the dollar, fundamentally changing the relationship between government and business. The Glass-Steagall Act of June 1933 allowed the government to regulate irresponsible speculation (risky investments) by banks and established the Federal Deposit Insurance Corporation (FDIC), which guaranteed all bank deposits up to $2,500. In 1935 Congress increased the deposit guarantee to $5,000 and transferred some authority over the Federal Reserve System (the central bank of the United States) from the 12 regional Federal Reserve banks to the Federal Reserve Board in Washington, D.C. Seeking to protect stock market investors, Congress passed the Truth in Securities Act of 1933, which required corporations to provide accurate and complete information to the public. In addition, the Securities and Exchange Commission (SEC) was established in June 1934 as a stock market watchdog.

In order to provide relief to millions of unemployed workers, Roosevelt established the Federal Emergency Relief Administration, which gave grants to states whose relief agencies had run out of money. Roosevelt's second program, the Civil Works Administration, temporarily provided work relief to more than 4 million people. His administration also established the Civilian Conservation Corps, which employed millions of young men to work in camps at national parks and forests. From 1935 to 1941 the Works Progress Administration (WPA) employed about 2.1 million workers, who built 110,000 public buildings, 600 airports, over 500,000 miles of roads, and more than 100,000 bridges.

In 1935 Congress passed the Social Security Act (SSA), one of the most important pieces of social welfare legislation in U.S. history. The act provided $15 a month to impoverished elderly Americans and started a system to provide an old age pension of $10 to $85 a month for many workers through a payroll tax. In addition, the SSA set up an unemployment insurance system and provided aid to disabled people and dependent children.