HAYWOOD PATTERSON WAS 18 WHEN HE AND OTHER BLACK teens hitched a ride on a freight train from Chattanooga to Memphis, Tenn., on March 25,1931. The trouble began when a white hobo, one of a group riding the rails, stepped on Patterson's hand. Patterson recalled:

"We was just minding our own business when one of them says, `This is a white man's train.' ... So there was a fight. We got the best of it and threw them off the train."

The fight was just beginning. It would ultimately expose a justice system with little consideration of an offender's age, and almost no regard for fairness if the accused was black. And it would lead to landmark civil rights rulings by the U.S. Supreme Court.

Kicked off the train, the white hoboes told a sheriff that blacks had been attacking whites. An armed posse stopped the train and pulled off nine black teens, including Patterson. They were tied up and taken to jail in nearby Scottsboro, Ala.

The already tense situation exploded when two white women from the same train accused the black teens of rape. Furious whites surrounded the jail. Only the arrival of the Alabama National Guard kept the Scottsboro Boys, as they were to become known, from being lynched.

Like many people during the Great Depression, the Scottsboro Boys had been on the train in search of work and adventure. They had grown up poor and mostly illiterate, and most hadn't met each other before that day. Even their correct ages were in question, though as they are known now, Charlie Weems, 19, was the oldest, and Roy Wright, 13, was the youngest. In between were Clarence Norris, 19; Andy Wright, 19; Haywood Patterson, 18; Olen Montgomery, 18; Ozie Powell, 15; Willie Roberson, 15; and Eugene Williams, 13.

The women--Ruby Bates, 17, and Victoria Price, 21--were reputed prostitutes. One later confessed that they had accused the boys to keep themselves from being arrested on morals charges. But for a black man, a rape accusation alone could be a death sentence. Thousands of black men had been lynched since the Civil War, most for alleged sexual advances toward white women. Those lucky enough to make it to court faced white lawyers, judges, and juries--who often treated blacks as inferiors.

The Scottsboro Boys went on trial 12 days after their arrests. The prosecution played on racial prejudice. In its summation, one prosecutor told the jury:

"Look at their eyes, look at their hair, gentlemen. They look like something just broke out of the zoo. Guilty or not guilty, let's get rid of these niggers."

The teens received little help from their court-appointed lawyers. One was a real-estate attorney who was drunk on the trial's first day; the other hadn't tried a case in decades.

Six teens denied ever having seen the women. The other three said their fellow defendants gang-raped the women, but denied taking part themselves. The three later said they had accused the others after being beaten and threatened.

Eight of the nine teens were found guilty and sentenced to death in the electric chair. Roy Wright's case ended in a mis-trial when one juror held out for life imprisonment because of Wright's youth. The Alabama Supreme Court later threw out Williams's conviction, saying his age should have been gotten more consideration. Even so, both remained locked up.

TRIALS OF THEIR LIVES

Help came from the International Labor Defense, the legal arm of the Communist Party. In an appeal, the ILD said the appointment of incompetent lawyers had violated the boys' right to due process. In November 1932, the U.S. Supreme Court agreed in Powell v. Alabama, which established that even poor blacks deserved effective legal counsel.

The decision also gave the Scottsboro Boys a second trial. This time, they were represented by Samuel Leibowitz, a New York criminal lawyer hired by the ILD. Using physical evidence, he showed that the rape charge was a sham. He also put Ruby Bates on the stand, where she testified that Victoria Price had urged her to falsely cry rape. Nonetheless, the all-white jury voted guilty. The judge threw out the verdicts and granted new trials. 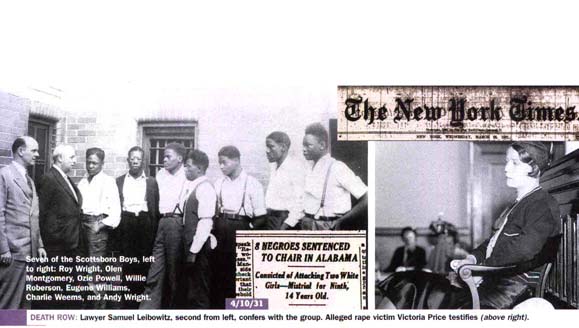 By now, prison life was grinding down the Scottsboro Boys. They had endured hard labor, beatings, and the sounds of inmates being executed. Norris remembered:

"The guards hated us because of all the attention we got from the outside world. They came into our cells and abused us.... They made us parade buck naked from our cells to the bath twice a week.... This was special treatment just for us."

At the third round of trials, once again, the boys were found guilty. Once again, their case went back to the U.S. Supreme Court. Leibowitz argued that qualified blacks were kept off Alabama juries, denying his clients a fair trial. In April 1935, the Court unanimously agreed in Norm v. Alabama, dealing yet another blow to Southern segregation.

By July 1937, Alabama was tiring of the bad press and high cost of the Scottsboro case. In the fourth and final round of trials, an odd compromise took place. Five of the older boys were found guilty and sentenced to long prison terms. But Montgomery and three younger boys--Roberson, Williams, and Roy Wright--were abruptly released. Those still imprisoned gradually won their freedom during the 1940s through parole or, for Patterson, escape. Andy Wright was the last out, paroled in June 1950.

Most of the Scottsboro Boys went on to troubled lives. In 1976, the last survivor, Clarence Norris, was pardoned by Governor George Wallace. At a tearful press conference, Norris said:

"I have no hate towards any creed or color. I like all people, and I think all people accused of things that they didn't commit should be free. I wish these other boys were around."

To help students understand one of the gravest injustices in American history, in which a group of African-American teens were sentenced to death for the dubious rapes of two white women.

* Why do you think Ruby Bates's admission that she falsely cried rape failed to sway a jury from finding the defendants guilty?

* Why do you think Alabama authorities suddenly freed four of the Scottsboro Boys in 1937?

* Are you aware of racial discrimination in the justice system today?

Critical Thinking: Direct students to column two, page 26, where the author says most white lawyers, judges, and juries treated blacks as inferior. Ask: Is presumed inferiority the same as presumed guilt? What specific evidence does the article provide that the Alabama legal system's assumption of the inferiority of blacks overwhelmed the pursuit of justice and produced a presumption of guilt? (On six occasions--after the train fight, the rape accusations, and the four trials--the system presumed guilt.)

Note Ruby Bates's admission that the rape charge was false. Tell students that she testified for the defense at the second trial of Haywood Patterson and campaigned for the release of the young men, even meeting with Vice President John Nance Garner about the case. If TV had been available in the 1930s, how might she have used it to win her campaign?

Remembering: Ask students to imagine they are helping a history museum set up an exhibit on the Scottsboro Boys. What two- or three-sentence title would best summarize the story of the Scottsboro Boys? Which four or five episodes in the story would they spotlight on museum panel displays? What drawings (in addition to photos in the article) would best illustrate the experience?

Web Watch: For additional background on the case, including a chronology, biographies of key participants, photos, and a map, go to www.law.umkc.edu/faculty/ projects/FTrials/scottsboro/scottsb.htm.