The second standard for intellectual disability is adaptive skills. The term"adaptive skills" means how well a person can deal with the tasks of everyday life. These tasks include the ability to speak and understand; home-living skills; use of community resources; leisure, self-care, and social skills; self-direction; basic academic skills (reading, writing, and arithmetic); and work skills. A person is regarded as intellectually disabled if he or she is unable to dress, feed, wash, or otherwise care for himself or herself; to hold a job; or to carry out most of the other tasks needed to get through an ordinary day.

Mental-health professionals classify patients into one of four levels of disability.

In about one-third of all cases, the cause of intellectual disability is not known. The remaining two-thirds of cases are thought to be caused by one of four factors: heredity, prenatal problems, childhood illnesses, and environmental factors.

About five percent of intellectual disability cases are caused by genetic factors. Genes are chemical units found in all cells. They carry the instructions that tell cells how they are to perform. In some cases, children inherit defective genes from their parents. These genes may interfere with the normal development of the child's brain, leading to intellectual disability.

The daily choices a pregnant woman makes may affect the mental health of her fetus. For example, fetal alcohol syndrome (FAS) affects about one in 600 children in the United States. Fetal alcohol syndrome is caused by excessive drinking by the mother during pregnancy and can lead to intellectual disability in the fetus. Drug abuse and smoking during pregnancy may also cause intellectual disability in the fetus.

Fetal damage may occur naturally, for unknown reasons. An example is the problem known as neural tube defect. In this disorder, the fetus's spine does not close normally. Fluids may collect in its brain, producing a condition known as hydrocephalus ("water on the brain"; pronounced hi-dro-SEF-uh-luhs). One possible result of hydrocephalus is intellectual disability.

Another important environmental factor is lead poisoning. Young children sometimes eat paint that has flaked off the walls of their home. This paint may contain the element lead. Lead has many harmful effects on growing children, one of which is damage to the brain.

The first step in diagnosing intellectual disability is a complete physical examination and medical history. Some forms of intellectual disability are caused by treatable illnesses. Hyperthyroidism is an example. Hyperthyroidism is a condition in which the thyroid gland produces too much thyroid hormone. A child's mental disorder may be treated, then, by first treating the medical problem that caused it.

If medical problems are ruled out, the patient may then be given a series of intelligence tests. These tests are designed to determine the child's intelligence quotient. Some tests that are commonly used include the Stanford-Binet Intelligence Scale, the Wechsler Intelligence Scales, and the Kaufmann Assessment Battery for Children.

Final diagnosis may also include a series of interviews between a mental-health professional, the child, and the child's family.

Some forms of intellectual disability can be treated. These are cases that are caused by medical problems, such as hyperthyroidism. In most cases, however, no treatment can change a person's basic intellectual capabilities.

The goal of most treatment programs is to help intellectually disabled individuals develop their intellectual and functional skills to the maximum possible level. The federal government has recognized the importance of this goal. It allows for all intellectually disabled children to have free testing and appropriate education and skills training from ages three to twenty-one.

Many intellectually disabled children now have the opportunity to attend special preschool programs and day schools. These programs and schools teach children basic skills, such as bathing and feeding themselves. They also provide educational programs, extracurricular activities, and social events developed especially for intellectually disabled children.

Treatment may also include family therapy. The purpose of family therapy is to help family members understand the nature of intellectual disability. It also helps them develop skills for dealing with the special needs of a disabled child. Parents may also receive counseling to help them deal with feelings of anger or guilt.

The prognosis for individuals with mild to moderate intellectual disability is usually good. These individuals can often become self-sufficient to some degree. However, they may require some educational, community, social, family, and vocational support.

Many forms of intellectual disability can be prevented. Pregnant women can avoid using alcohol, drugs, and tobacco. Infections they develop should be treated promptly. Good nutrition during pregnancy is always an important factor in providing the best possible environment for the fetus.

Adaptive skills: The ability to carry out a large variety of ordinary tasks required to live successfully in the world.

Fetal alcohol syndrome (FAS): A medical problem that affects a fetus and is caused by excessive drinking by the mother during pregnancy.

Genes: Chemical units found in all cells that carry the instructions telling cells how they are to perform.

Hydrocephalus: Accumulation of fluid in the brain; also known as"water on the brain."

Hyperthyroidism: A condition in which the thyroid gland produces too much thyroid hormone, causing a variety of medical problems.

Intelligence: The ability to learn and understand.

Intelligence quotient (IQ): A numerical measure of a person's intelligence.

Neural tube defect: A medical disorder in which a fetus's spine does not close normally. 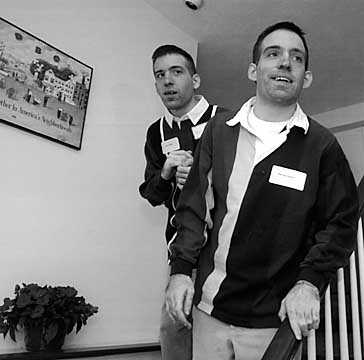