RADICALS AND RADICALISM. The word "radical" is popularly used to designate individuals, parties, and movements that wish to alter drastically any existing practice, institution, or social system. In politics, radicals are often seen as individuals and/or parties reflecting "leftist" views. This meaning originated during the French Revolution (1787–1789), where those most opposed to the king sat in the National Assembly at the far left, and those most committed to the king at the far right. It is therefore common to designate points on the political spectrum, reading from left to right, as radical, liberal, conservative, and reactionary.

Immediately after the Civil War (1861–1865), the term "radical" gained widespread usage in the United States when it was applied to a powerful faction of the governing Republican Party who fought to reconstruct the defeated Confederacy. Their policies promoted social and political rights for the former slaves, and they opposed the return to power of former Confederates and members of the former slaveholder-planter class. The Radical Republicans impeached and nearly convicted President Andrew Johnson for his opposition to their Reconstruction policies. At their most militant, they advocated the redistribution of millions of acres of plantation land to the former slaves, a policy embodied in the slogan "forty acres and a mule," but instituted only limited land reform programs.

Radicalism in politics from the end of Reconstruction to the beginning of the Cold War was generally associated with proposals to fundamentally alter the capitalist economic and social system. In varying ways, radicals demanded far-reaching changes in property relations. Among the nonsocialist radical groups of the time were the Knights of Labor, Greenback Labor Party, and Populist Party, who advocated a wide variety of reforms, includingPage 17  |  Top of Article more democracy in politics, various producer and consumer cooperatives, government ownership of railroads and telegraph lines, and antitrust legislation to protect farmers, skilled workers, and small businessmen threatened by the economic instability and political corruption that accompanied the rise of big business.

The Marxist socialist tradition in America had its roots among refugees from the European revolutions of 1848. In 1901, a variety of socialist organizations and factions joined to create the Socialist Party of America. World War I (1914–1918) brought about widespread repression of the Socialist Party and other radical groups. The Rus-sian Revolution intensified this "Red Scare," which continued into the postwar period against the new Communist Party, USA, founded initially out of radical factions of the Socialist Party in 1919.

Communists sought to advance the working-class movement and prepare the way for the eventual triumph of socialism. During the Great Depression, they achieved great success by leading struggles to organize unions, 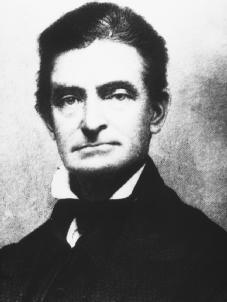 John Brown. The radical abolitionist, whose violent tactics horrified most Southerners and alienated even many antislavery advocates—until the Civil War, when Brown, who had been executed in 1859 for treason, was widely regarded as a martyr in the North. NATIONAL ARCHIVES AND RECORDS ADMINISTRATION 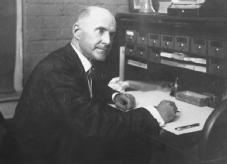 Eugene V. Debs. The radical first president of the American Railway Union, cofounder of the Industrial Workers of the World and the Social Democratic Party, and Socialist presidential candidate five times between 1900 and 1920, winning more than 900,000 votes the last time—despite being in prison for opposing American involvement in World War I. LIBRARY OF CONGRESS

fight against racism and anti-Semitism, and fight for social reforms. After 1935, communist activists joined with liberals to build the industrial unions of the Congress of Industrial Organizations (CIO). Communists also joined with liberals and other radicals to fight segregation, racism, and isolationism at home.

The alliance of radicals and liberals in the 1930s produced a sharp backlash among conservative elements and business elites, leading to the creation of the House Un-American Activities Committee (HUAC) in 1938, which identified conservative policies with "Americanism" and New Deal policies with Soviet-directed communist conspiracies. With the development of the Cold War after World War II (1939–1945), the Soviet Union became a permanent enemy, and radicalism that could be associated with the Communist Party, USA, however far-fetched it might be, was portrayed as the "enemy within." What followed was the longest and most comprehensive campaign against radicals in American history. In 1947, President Harry S. Truman's administration established a federal "loyalty" program and an Attorney General's List of Subversive Organizations. In 1950, the McCarran Internal Security Act established a "Subversive Activities Control Board" to label and register alleged "Communist groups." Local "loyalty oaths," purges in the trade unions, blacklists in the arts, sciences, and professions, along with sporadic acts of vigilante violence against domestic radicals, characterized the period.

During the civil rights movement of the 1950s, the seeds of mass political protest and new alliances between liberals and radicals were sown. In 1955, the Reverend Martin Luther King Jr. led a successful mass strike against bus segregation in Montgomery, Alabama. In the aftermath 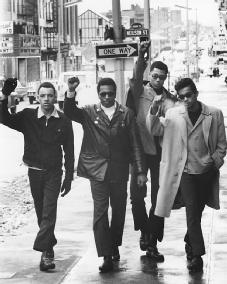 Black Panthers. Members of the radical group that advocated Black Power as well as community programs—(left to right) James Pelser, Jerry James, Greg Criner, and Robert Reynolds—walk in New Brunswick, N.J., in February 1969, during a period of increased violent confrontation between the Panthers and police around the country. AP/WIDE WORLD PHOTOS

of the strike, a Southern Christian Leadership Conference (SCLC) led by King organized against segregation throughout the South. Meanwhile a radical or militant northern group, the Congress of Racial Equality (CORE) grew in membership. In 1960, the Student Non-Violent Coordinating Committee (SNCC) was founded to mobilize student-and youth-led campaigns against segregation. SNCC and COREled "Freedom Rides" against interstate bus segregation throughout the South in 1961, and King organized a mass strike against the whole system of segregation in Birmingham, Alabama. Although these campaigns produced a backlash of violence against civil rights activists, they resulted in the Civil Rights Act of 1964 and the Voting Rights Act of 1965, which ended the system of segregation and sharply reduced institutional and ideological expressions of racism.

During the 1960s, the civil rights movement and the beat cultural movement spawned what dissident sociologist C. Wright Mills called a New Left, as organizations like the SNCC and the Students for a Democratic Society (SDS) developed the concept of an activist participatory democracy and called for a radical restructuring of society, either through social revolution, or by, in the words of the writer Timothy Leary, "tun[ing] in, turn[ing] on, [and] drop[ping] out." The beat movement developed into the mass "hippie" counterculture, which championed "alternative" living arrangements and philosophies of life.

In 1963, Betty Friedan's groundbreaking book THE FEMININE MYSTIQUE challenged the exclusion of women from all areas of work and sought to change the role of women in the home. More radical feminist writers like Shulamith Firestone and organizations like Red Stockings joined with liberal feminists to fight for reproductive rights, affirmative action policies in employment, and the passage of an Equal Rights Amendment.

The social radicalism of the 1960s also produced consumer and environmental movements. Ralph Nader inspired and led a generation of activist researchers and attorneys to expose and challenge the abuses of corporate power. Although political power passed to conservatives in the 1980s, alliances of radicals and liberals challenged and pushed back the nuclear power industry, led campaigns for a nuclear freeze, and struggled to defend affirmative action for minorities and women and oppose President Ronald Reagan's "Star Wars" proposal.

What is radical in the political and cultural sense is born of the mainstream, of the gap between the rhetoric of democracy and opportunity and the reality of life. The function of American radicals and radical movements has been to challenge complacency, think the previously unthinkable, and open up space for society's mainstream to change and progress. As society changes, the meaning of radicalism itself changes. Proposals once considered radical—social security and unemployment insurance, equal rights for minorities and women—are now considered by many to be normal and necessary.