CHRISTMAS COMES BUT ONCE A YEAR, and a politician like Sam Rayburn comes but once a half-century or so. The child of cotton farmers, Rayburn was a committed Democrat, determined to make the hardscrabble world he grew up in an easier place for future generations. He valued integrity above all else; "No one can buy Sam Rayburn," lobbyists lamented. At home in Texas he embodied the classic, old-school Southern politician--he enjoyed tobacco and whiskey, helped constituents plow and hoe, and displayed pictures of Robert E. Lee on his office wall. But in Washington he was known and feared for his temper, his obstinacy, and his implacable hatred of lawmakers who put "the interests" ahead of "my people."

Samuel Taliaferro Rayburn was born on January 6, 1882, in Roane County, Tennessee. When he was five, his parents moved to a farm near Bonham, which he always considered his hometown. He had ten siblings.

He graduated from what is now East Texas State University and taught briefly before running for state representative in 1906. After serving only two terms, he was elected Speaker in 1910. Between sessions, he attended law school at the University of Texas.

Raybum won his first race for Congress in 1912 and served for 48 years, more than anyone else in history. In 1940 he became Speaker of the House, a position he held for a total of nine sessions (another record that still stands). He never faced a Republican opponent. 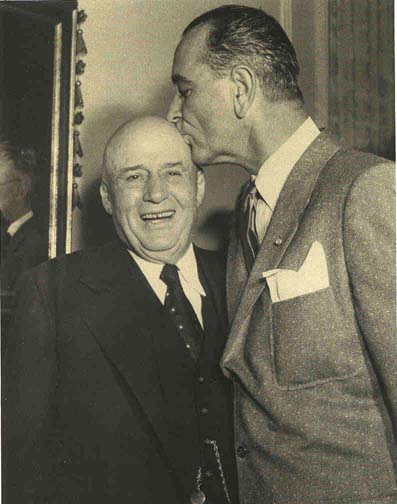 In 1927 he married a woman eighteen years his junior, but they divorced after three months. Loneliness was one reason Congressman Lyndon Baines Johnson (at right in photo) became what insiders called Rayburn's "professional son." Just as John Nance Garner, a fellow Texan and Roosevelt's vice president, had helped the young Raybum, so Rayburn championed the young LBJ.

In 1957 he supported the Civil Rights Act, one of the few times he disregarded his constituents' wishes.

On November 16, 1961, he died of pancreatic cancer in Bonham. A final indicator of his honesty: The life savings of one of the most powerful men in America amounted to only $15,000.