Austrian-born American actress Hedy Lamarr (1913–2000) was among the leading screen sirens of Hollywood in the 1940s. Her life was an eventful one that involved six marriages, a groundbreaking electronic invention, and several cinematic milestones.

Born to Bank Director and Pianist

Lamarr was born Hedwig Kiesler in Vienna, Austria, on November 9, 1913. Her family was Jewish and well off; her father was a Bank of Vienna director and her mother a concert pianist. Lamarr attended schools in Vienna and was sent to a finishing school in Switzerland as a teenager. By that time she was already unusually beautiful, attracting the attention of both prospective lovers and film producers. After an unsuccessful audition with famed stage director, Max Reinhardt, from whom she had taken acting lessons, Lamarr moved into films. Her screen career began in 1930 with a pair of Austrian films, Money on the Street and Storm in a Waterglass.

She had several other small roles in German-language films, but it took controversy to put Lamarr on the cinematic map. In 1932 she made a film called Extase (or Ecstasy) in Czechoslovakia; it was released the following year. The film told the simple story of a young woman whose husband is impotent, causing her to seek out the companionship of a younger man. Two scenes were responsible for the film's notoriety and quick banning by Austrian censors: one in which Lamarr runs nude through a sunlit forest, the other a sex scene in which she seems to experience orgasm (her intense facial expressions actually resulted from the application of a safety pin to her buttock by director Gustav Machaty). Lamarr later said that she had been a naive young woman pressured into doing these scenes, but cameraman Page 226  |  Top of Article 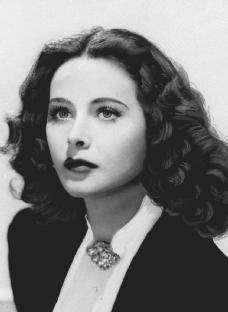 Jan Stallich told Jan Christopher Horak of CineAction that "as the star of the picture, she knew she would have to appear naked in some scenes. She never made any fuss about it during the production."

Controversy and condemnation from Pope Pius XI temporarily halted Lamarr's film career, but Extase did attract the attention of millionaire Austrian arms dealer Fritz Mandl, whom Lamarr met in December of 1933 and then married. Mandl had converted from Judaism to Catholicism in order to be able to do business with Germany's fascist regime (he was nevertheless exiled to Argentina after Austria came under German control in 1938), and Lamarr also made her religious conversion in 1933. An often-repeated story holds that Mandl tried to buy and destroy every outstanding copy of Extase, but this is thought to be legend rather than fact. Whether out of revulsion toward her husband's politics or from sheer restlessness, Lamarr packed a single suitcase with jewelry, drugged her maid, and fled to Paris and then London in 1937. That September she sailed for New York.

On board, she began negotiating with producer Louis B. Mayer of the Metro-Goldwyn-Mayer (M-G-M) studio, who had signed Swedish actress Greta Garbo several years earlier and was on the lookout for exotic European talent. Lamarr had refused Mayer's contract offer in London, but by the time the ship docked in New York she had a $500-a-week contract and the new name of Hedy Lamarr—up to that point she had used Hedi Kiesler. Mayer devised the name, inspired by that of silent film actress Barbara La Marr.

Lamarr's first film in the United States was Algiers (1938), in which she played opposite French actor Charles Boyer as a woman who, though engaged to another man, has an affair with an escaped thief (Boyer). The film was a successful launch for Lamarr's American career, but it was followed by two flops, Lady of the Tropics (1939) and I Take This Woman (1940), the latter co-starring Spencer Tracy and dubbed I Re-Take This Woman after Mayer demanded numerous changes in the script. The actress's fortunes turned around later in 1940 with Boom Town, with Clark Gable in the lead role, and Comrade X, a sort of anti-Communist romance in which Lamarr played a Soviet streetcar driver who falls in love with an American reporter (Clark Gable).

Throughout World War II, Lamarr was a fixture on American movie screens with such films as Come Live with Me (1941), Ziegfeld Girl (1941), and the steamy White Cargo (1943), in which Lamarr played a mixed-race prostitute on an African rubber plantation (although censors demanded that references to her character's ethnicity be removed from the script). With such films as 1943's The Heavenly Body (the title ostensibly referred to astronomy), Lamarr emerged in the first rank of screen sex symbols. A poll of Columbia University male undergraduates ranked Lamarr as the actress they would most like to be marooned with on an island, and in 1942 Lamarr participated in the World War II mobilization effort by offering to kiss any man who would purchase $25,000 in War Bonds. She raised $17 million with 680 kisses. In 1943, Lamarr was rumored to have been in the running for (or to have turned down) the role that eventually went to Swedish actress Ingrid Bergman in Casablanca.

Lamarr had plenty of space in celebrity gossip columns to go with her screen stardom. She dated silent comedian Charlie Chaplin in 1941, and had flings with Burgess Meredith and several other actors. Lamarr married producer Gene Markey in 1939, divorcing him the following year. For four years she was married to English actor John Loder and had two children by him. Later in life Lamarr was married three more times, to bandleader Teddy Stauffer, Texas oil magnate Howard Lee, and lawyer Lewis Boles. All her marriages ended in divorce. Another man with whom Lamarr may have been romantically involved was composer George Antheil.

Antheil played an important role in Lamarr's life in another way as well—as a collaborator on an important electronics innovation. Lamarr was slightly dismissive of her glamorous image, saying (according to her U.S. News & World Report obituary), "Any girl can be glamorous. All you have to do is stand still and look stupid." Lamar, by contrast, had been astute enough to pick up a good deal of practical knowledge pertaining to munitions engineering during her marriage to Mandl. In 1940 she had the idea for a solution to the problem of controlling a radio-guided torpedo. At that time, electronic data broadcast on a specific frequency could easily be jammed by enemy transmitters. Lamarr suggested rapid changes in the broadcast frequency, and Antheil, who had experimented with electronic musical Page 227  |  Top of Articleinstruments, devised a punch-card-like device, similar to a player-piano roll, that could synchronize a transmitter and receiver. The system Lamarr and Antheil invented relied on using 88 frequencies, equivalent to the number of keys on a piano.

Realized No Money from Invention

The pair were jointly awarded a patent for their discovery, but Antheil later credited the original idea entirely to Lamarr. Credit did not matter, however, for the idea, later given the name of frequency hopping, was never applied by the military during World War II. It was later rediscovered independently and used in ships sent to Cuba during the missile crisis of 1962. The real payoff of frequency hopping came only decades later, when it became integral to the operation of cellular telephones and Bluetooth systems that enabled computers to communicate with peripheral devices. By that time, Lamarr and Antheil's patent had long since expired.

Experiment Perilous (1944), directed by Jacques Tourneur, was considered one of Lamarr's best films, but her career gradually declined after World War II. The most visible outing from this phase of her career was the Cecil B. DeMille-produced Samson and Delilah (1949), with Victor Mature and Lamarr in the title roles. The film, in Horak's words, "marries an Old Testament-style, evangelical Christian moralism with the theatrical exploitation of unadulterated sex." For David Thomson of London's Independent on Sunday, the film had "many moments where [Lamarr's] foreign voice, her basilisk gaze, and her sinful body combine to magnificent effect."

Lamarr made several films in the 1950s, mostly operating outside of the Hollywood system. In the 1954 Italian-made feature The Loves of Three Queens she played Helen of Troy, and she took on another historical role as Joan of Arc in The Story of Mankind (1958). Her heyday was past, however, and she stayed away from Hollywood for much of the time. In 1950 she sold off all of her possessions in an auction and announced that she was moving to Mexico. A marriage brought her back to the United States and to Texas in 1955, and in retirement she moved to Florida. Occasionally she appeared on television. In 1967 she published an autobiography, Ecstasy and Me: My Life as a Woman, but sued the ghostwriters she had employed, claiming (according to Thomson), that the book was "fictional, false, vulgar, scandalous, libelous, and obscene."

That was one of several episodes that saw Lamarr entering courtrooms in her later years. Lamarr was arrested in 1966 for shoplifting at Macy's department store, but was acquitted. She complained to a columnist that she had once had a $7 million income but by the late 1960s was subsisting on a $48-a-week pension. Another round of litigation came after the release of director Mel Brooks's Western film parody Blazing Saddles in 1974; the actress objected to the fanciful "Hedley Lamarr" name of one of the movie's characters.

Lamarr lived mostly in isolation in a small house in Orlando in the last years of her life, reportedly staying out of the spotlight partly because of unsuccessful plastic surgery. She antagonized the organizers of a film festival with unreasonable demands for a makeup retinue. In 1990, however, she had a cameo role in the satire Instant Karma, and she lived long enough to see a modest renewal of interest in the sexually independent persona she had often projected on film. The story of her radio transmission invention also became widely publicized in the 1990s, and she received an Electronic Frontier Foundation Pioneer Award in 1997, although she never received any monetary award for her ingenuity. On January 19, 2000, Hedy Lamarr died at her home in Orlando.